A Holistic Approach – Part 1: We Train as We Play

AN ALL-TIME CLASSIC QUESTION; How to achieve and manage the balance between physical and tactical training? Where does a fitness coach’s work end and where does the work of the football coach start? To begin with, training to enhance physical performance is an adaptive process that involves progressive manipulation of the physical load (Manzi et al, 2010), which is the sum of the fitness coach and football coach’s work. Monitoring training load is therefore essential (as all practitioners attest to), in managing the training “dose” to ensure the desired improvements in performance are attained whilst minimizing the incidence of load-related injuries (Akenhead & Nassis, 2016; Weston, 2018). Furthermore, in modern football, match analysis and technology provide coaches with important information on the physical, technical and tactical demands of the game, highlighting each player’s performance (Sarmento et al 2014; Rein & Memmet 2016).

Every action performed in the game includes a decision (tactical part), an action or motor skill (technical part) that requires a particular movement (physiological part) and is directed by volitional and emotional states (psychological part) (Delgado & Mendez-Villanueva, 2018). How well are we taking into account this information? How do we implement this in our daily training process?

Every football or fitness coach should always ask him/her self:

we have to reconsider our daily training process and game model?

is our training philosophy coming from that game model?

and how can we periodise all physical and tactical contexts?

“Training is worth it only when it lets you make your ideas and principles operational. Thus, the coach has to do exercises to guide his team to do what it is intended to do in the game.” (Mourinho, 2006).

What Are the Key Aspects That We Need to Know When Designing Our Training Sessions?

Football or Soccer (in European “sport glossary”), is an intermittent sport with a) physical demands, with changes in the speed of movement and direction (e.g., walking, jogging, high intensity running, and sprinting), b) technical actions (dribbling, passes, shots, etc.) and c) tactical principles of play (e.g., playing style, formation, positioning, etc.) which ultimately determine the outcome of the match and the overall team performance. Tactical Periodisation is a contemporary training approach in football that was recently introduced where the reference is always the GAME. Therefore, whatever you are doing in your training (physical & tactical training) should link to what you would like to see in the game. When devising your Game Model, you should consider several factors (figure 1). 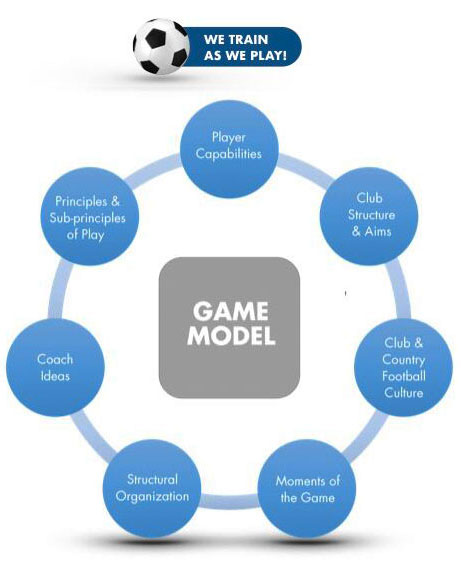 Each team has a different game model according to their coach’s philosophy, the different profile of players that a squad has, any cultural specificities a club or country may have and so on. However, we can see coaches breaking the rules; for instance, Maurizio Sarri (current Chelsea FC coach) has the same Game Model and philosophy working in a lower ranking team as working in a big team. One of his game model’s characteristics is to find the depth playing short to attract the opponent and find the space at their back (video 1).

Coaches should always be prepared to adapt to the current conditions that they are facing.  Moreover, we need to bear in mind that having a clear Game Model reduces the players’ uncertainty when they play and gives them more time to develop their creativity (Delgado & Mendez-Villanueva, 2012).

When coaches are building their team’s Game Model, they are building on collective patterns (team), sectorial (one line, e.g. defenders), inter-sectorial patterns (two lines between them, e.g. defenders with midfielders), and individual (one player) (Delgado & Mendez-Villanueva, 2018). Furthermore, learning from the coaching education courses, a coach’s plan consists of a) formation (system of play), b) tactics (individual-lines-team), c) special tactics, and d) strategy. It is essential to analyze our team’s way of playing (formation/tactic) and identify what are the tactical demands of each position (a Right Back may have different demands from system to system). It is not suggesting, players doing individual “positional” fitness training. For example, it will not be beneficial for a Right Back to try simulating his game in the fitness training context without any tactical requirements. It would be better for him to do football training in his position, executing the same time all his tactical demands.

Nevertheless, we have to identify the physical demands of that Game Model and try to train them first with football. Fitness training should always be complementary to football training; primarily to target injury prevention and then to improve performance. In order to achieve this, positional (averages and max) and individual (averages and max) would be fundamental elements to start building the team’s profile; in order to help coaches adjusting the training prescription (figure 2). 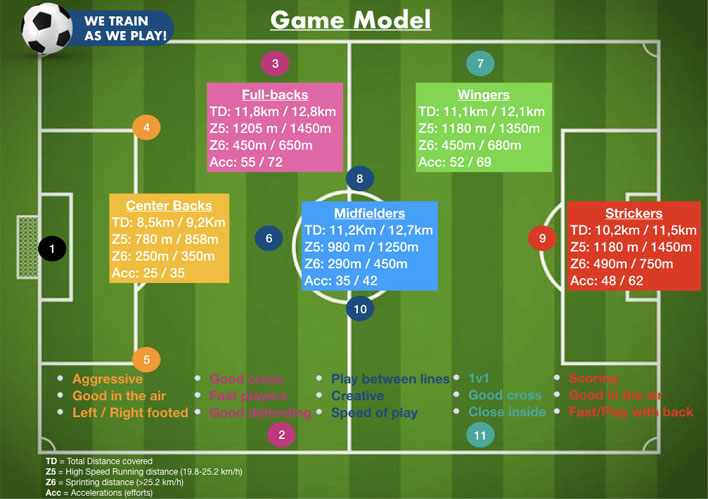 When looking at players’ performance in a game, we should consider the high variability in players’ running performance from game to game (Al Haddad et al, 2017), especially in high speed running (Gregson et al 2010; Al Haddad et al, 2017). Moreover, we have to bear in mind that when using these physical parameters to analyze our Game Model, we only quantify the movement profile of our game, and not the non-locomotor activities such as tackling, kicking, duels, jumping that could metabolically influence the player’s performance. In the end, the most important is the ability to generate a high physical output during the game, without the significant compromise of the technical, tactical or psychological aspects of match play (Delaney, 2018).

B) Moments of the Game 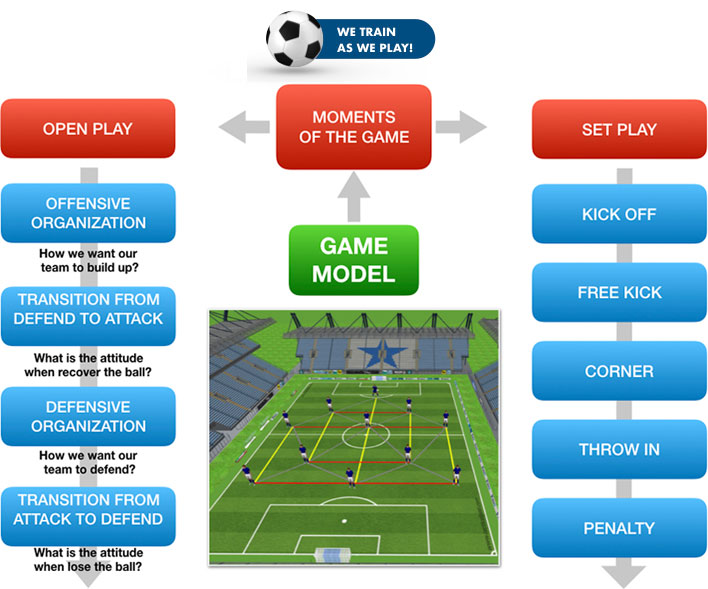 Building our Game Model, we should have a clear philosophy (from Macro-principles to Sub-principles) of what our team is doing in each phase. For example, in Offensive organization, our Macro principle could be Ball Possession, to attract the opponent and Sub Principles (how we could actually achieve the macro principle); Goalkeeper distribution, passing between the lines, playing direct and good positional play. Similarly, we have to do the same for all four moments and Set Plays. At least one of these four moments of the game or Set Plays should always be present in every training exercise. In general, when somebody watches your team’s game, he/she would be able to distinguish your philosophy; how you build up, your defending organization, and what is the team’s characteristics when you recover or lose the ball.

Efthymios Kyprianou, was born in Limassol Cyprus. He holds a Sports Science degree from Aristotle University of Thessaloniki and an MSc in Sports Coaching & Management from Kingston University, London. He is currently a PhD student at John Moores Liverpool university. Efthymios also holds a UEFA A’ coaching diploma. He is a professional Sport Scientist and Strength & Conditioning Coach, mainly focusing on soccer. He has been working for years with major clubs and teams, such as the Cyprus National Soccer Team, AEL FC, Apollon Limassol FC and Apollon Ladies FC. He is currently working as a soccer physiologist for Aspire Academy and the Qatar Football Association. His research area emphasizes on testing and monitoring soccer players in relation to maximizing their performance.

Francesco Farioli is an Italian Football Coach, with a philosophy degree. He started working as Goalkeeping Coach in youth and semiprofessional clubs in Italy, before becoming the youngest GK Coach ever in the Italian professional football at the age of 25. After he has joined Aspire Academy and Qatar National Team for two years, before going back at the age of 28 to Italian Serie A with Benevento (goalkeeper Brignoli’s head goal against AC Milan). This season he is working with Sassuolo Calcio (Serie A) in the Roberto De Zerbi’s Staff.