A Holistic Approach Part 3: Bring All Together – Design Your Weekly Plans

In case you missed the previous parts of this excellent article series you can find them here: Part 1 | Part 2

In the last few years, one of the most debated subjects amongst football sport scientists and coaches is the importance of designing a weekly plan. Many suggestions and tips have been recommended by experienced specialists in the football field. In this part, we will outline and elaborate on the most essential aspects each professional must consider when designing a weekly plan.

What does every team competing in a match aim to accomplish? To win! How can that be achieved, one would ask? With good preparation; both tactically and physically. These two aspects have to correlate, but tactical periodization has to drive the physical aspect which, in turn, should be adjusted to our team-playing game model. It cannot be expected that with just a 4-6-week preparation our players would be ready to continuously and optimally perform for the next 10 months. We have to be ready and flexible in how we adjust our planning of our players and the overall team needs. Therefore, in the end, it all comes down to what our player (individually) and team (group) are missing from both a tactical and physical point of view. With regard to the team’s way of playing, we also must consider our opponent’s style of play. Conclusively, the most important thing is to design the weekly plan and try to incorporate all discussed above.

Starting off: the four most important parameters when designing the weekly plan are (figure 1): 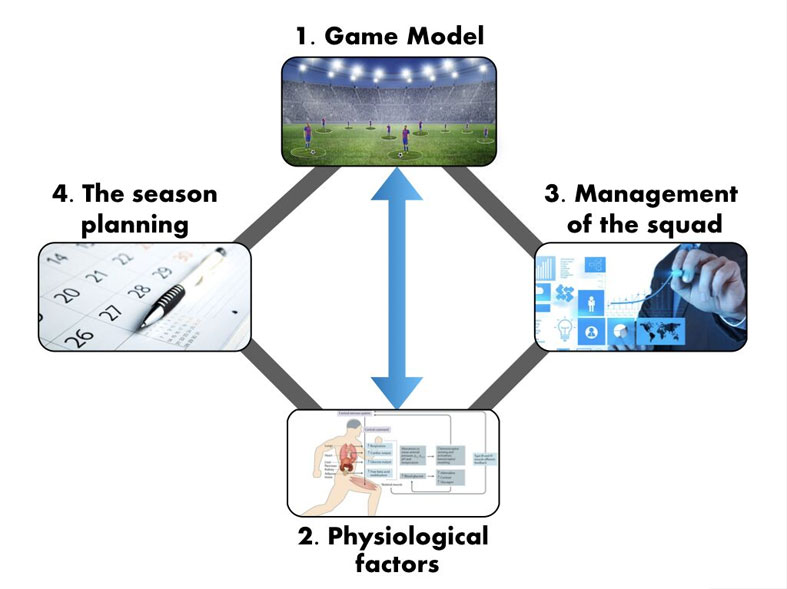 Step 1 – The style of play, or Game Model of a team (formation, game plan, team tactics)

The first part and the most important aspect when designing a program. In recent years the principle of Tactical Periodization was introduced to soccer. This involves the four moments of a game, which define the key elements of every training session (with the game always used as a reference). Every coach and team must build their own Game Model. Starting with simple passing exercises, we must ensure our players actively think about their actions, rather than automatically performing them.

“To me, the most important aspect in my teams is to have a defined game model, a set of principles that provides organization. Therefore, since the first day, our attention is directed to achieve that” Mourinho, J. in Gaiteiro, 2006

To summarize, we train as we play, and we play as we train. This must be at the center of a coach’s mind when planning a training session. The Game Model and its principles have to be clear and defined from the beginning. The way we expect our team to play (system), moments of the game (mentioned above), player capability (what our player can reach and not what we would like to see from them), and the club’s structure and targets are some of the sub principles of how we should build our game model; and in the end, will have a crucial impact when we design our weekly plan.

Additionally, video analysis, a new trend in football, comes to support the tactical analysis of the team, and when designing our weekly plans. Big clubs around the world are investing a great deal in staff and technology in order to analyze and develop their team game, but also each player’s individual performance. Qualitative game observations are less objective and systematic, but also very slow in the analysis processes (up to 6 hours). On the other hand, Memmert et al (2016) showed that using quantitative game observations, a high level of tactical competence is important for players’ effective performance in football. They demonstrated based on position data of a high level 11 vs 11 game (Bayern Munich vs Barcelona), a variety of computer science approaches that enable the teams to obtain and analyze parameters; inter-player coordination, inter-team coordination before critical events, and team interaction. All these metrics could help coaches to adjust their training methods based on recent game results. Therefore, coaches who have their own team’s game analysis as well as their opponent’s analysis can build a solid game model and can work based on that through their weekly plan to improve the tactical behavior of their players.

Video feedback, in real-time or after the completion of training is crucial for player development. A number of coaches are using different methods to do that, but it is important to understand our players’ cognitive skills and how we could possibly make them understand the information we want. After a game (during the recovery session) coaches are now using video feedback and corrections on the pitch to explain to their players what they think went wrong.

How can physical fitness targets be combined with tactical targets? A seemingly easy question. But the answer is far from simple. I personally find this to be the biggest challenge for a football fitness coach. The tactical target changes according to our team’s needs or to our next opponent’s way of playing, but the physical target could remain the same on a given day (Villanueva & Delgado, 2012). By knowing what our players did in the last match (with the help of Prozone or GPS system) and by having our players’ profiles, we can manage the load we are going to give our players for a specific period of time. Planning a periodization for more than a full week in football is not an ideal training scenario!

It is fundamental for coaches to know the physiological threshold-specific training according to the intensity and mode of exercise (figure 2). Afterward, they will have to understand how the energy supply systems work, and how to target each system (using drills that incorporate/don’t involve the ball). Only then our weekly plans will be designed covering both tactical and physical perspective. 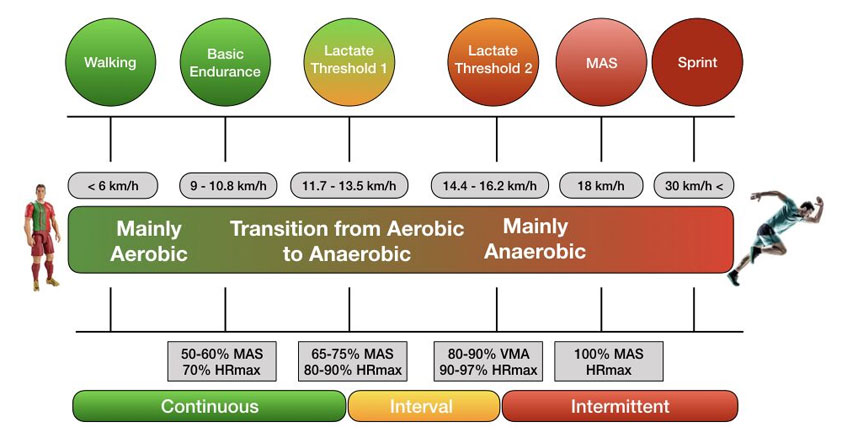 Figure 2. Physiological threshold-specific training according to intensity and mode of exercise (Shterjovski, 2015)

The ideal scenario for a football team would be to work on these aspects individually. Having developed each player’s profile, we set the individual threshold and get the respective data for each player. Therefore, we know if we actually develop each of the desired training targets. For instance, the Maximum Sprinting Speed for a player is 32 km/h and 27,5 km/h for another, so both of them will be required to train according to their threshold. Similarly, in the cases of Maximum Acceleration, Maximum Aerobic Speed, and Maximum Strength we have different thresholds for each player. When implementing speed drills; do we know if we are actually developing speed? The only way to achieve that would be to set testing sessions (2-3 times per season) and track players’ performance while recording each player’s maximum values.

Additionally, as we build our sessions from a tactical point of view, we should build our players’ fitness according to our game model. Speed zones, accelerations, or sprints covered in a game should work as references for us when designing the weekly plan. Similarly, moves performed in a game have to be added in our strength routine. Do not just stick to simple squats or bench press; think what your players are doing in the game and challenge their muscles with specific drills using bands, cable machines, or iso-inertial technology.

It is desirable to work individually on certain physical aspects (prevention routine, strength, power) before training sessions start on the pitch. It’s all about fostering education from younger ages until senior professional level. If we clearly indicate to our players what the desired target is, they will most likely do the required work to achieve that target. Don’t adopt a dictator-like attitude (although at times it seems inevitable), but try to come closer to your players, educate them, and help them develop.

For tactical periodization, what’s most important is the game model and the team’s weaknesses. Consequently, separating blocks to just pre-season and in-season is not enough. The training procedure is something that’s alive and changes from week to week. It also changes according to the next opponent and the tactical and physical demands of the game.

Efthymios Kyprianou, was born in Limassol Cyprus. He holds a Sports Science degree from the Aristotle University of Thessaloniki and an MSc in Sports Coaching & Management from Kingston University, London. He is currently a Ph.D. student at John Moores Liverpool University. Efthymios also holds a UEFA A’ coaching diploma. He is a professional Sports Scientist and Strength & Conditioning Coach, mainly focusing on soccer. He has been working for years with major clubs and teams, such as the Cyprus National Soccer Team, AEL FC, Apollon Limassol FC, and Apollon Ladies FC. He is currently working as a soccer physiologist for Aspire Academy and the Qatar Football Association. His research area emphasizes testing and monitoring soccer players in relation to maximizing their performance.

Francesco Farioli is an Italian Football Coach, with a philosophy degree. He started working as Goalkeeping Coach in youth and semiprofessional clubs in Italy, before becoming the youngest GK Coach ever in the Italian professional football at the age of 25. After he has joined Aspire Academy and Qatar National Team for two years, before going back at the age of 28 to Italian Serie A with Benevento (goalkeeper Brignoli’s head goal against AC Milan). This season he is working with Sassuolo Calcio (Serie A) in the Roberto De Zerbi’s Staff.