Posted by Mladen Jovanovic on 22/07/2012 in Membership Content, Strength Training

Couple of Insights From Explosive Lower Body Training With PowerTool/GymAware

As I have posted in the previous blog post I am currently playing with PowerTool/GymAware and aiming to increase my power output in squat jump, VJ and bench throw, along with trying to improve strength in squat and bench press using (a form of) dynamic effort method, during which I cut my set where my power drops below 90% of initial rep.

Also, I am putting back Olympic lifts (clean, snatch and hang clean and hang snatch) into the program after a very long break. I am starting very conservatively and as you will notice my technique is not so ‘smooth’ and ‘quick’.

I have started the training with the snatch. My technique (especially the catch) was ‘unconfident’ because I haven’t done snatches for a long time, even longer than I skipped cleans. On the second set on the video (actually a third or fourth in training) I kind of improved the catch (except the first rep where I sumo-ed it) and I finished with couple of overhead squats with a pause in the bottom.

On the next clip I did some cleans just to finish up. Again, technique doesn’t look ‘snappy’ and I tend to ‘bounce it’ off my quads, as can be seen by the drift of the bar forward. I guess this will get a lot better with more practice and heavier weight. I have also finished with some front squat holds.

After the cleans, I wanted to test  my VJ using broomstick. The GymAware needs to be started from the set-up position (standing tall) so it can recognize this as the ‘zero position’ and calculate difference between this point and highest point. I have reached 49.1cm in later set (you need to trust me because I didn’t tape it). This is without arm swing so I guess it is a decent score. We have problems with the celling height and we don’t test tallest athletes because of the fear of hitting it, or at least fear influencing the score.

When it comes to countermovement jump with 20kg (empty barbell) I wanted to see how my depth will impact the power readings. Theoretically, going deeper will increase the work done (Force X distance) and if the time of movement is the same power will be higher. Unfortunately, it seems that going deeper affects eccentric-concentric transition (and ‘energy return’) and increase the movement time, thus decreasing power output. As can be seen on the video, on the 3rd and 4th rep and purposively went deeper in the squat and scored less on power output. On 5th and 6threp I went pretty ‘shallower’ which resulted in more ‘snappier’ lift and thus higher power output. In the following table you can find the analysis for the each rep (the full GymAware app with web based software does this automatically – I don’t have that one so I copy-pasted the values manually)

As can be seen, I have changed the jumping style (dip) and scored different of the Height and Power measures.

On the following table I did correlations for the variables: 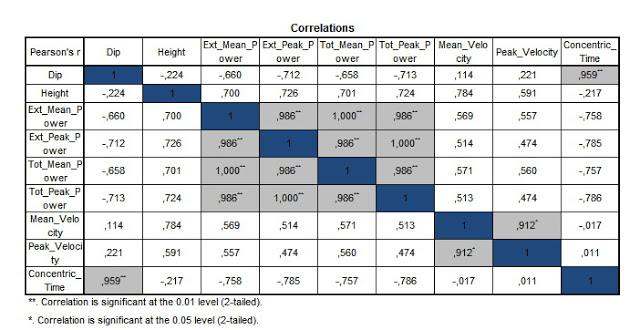 If we take out fatigue out of equation, we can clearly see negative correlations between the DIP and the Power (both external, total mean and peak) and perfect correlation with CONCENTRIC TIME.

All power measures have almost the perfect correlation between themselves (as can be seen by gray area). BTW, Total system is when I take my BW into equation.

This creates some problems in measurement and evaluation of the players.First, taller players will score higher on the power readings (anyone have correlates between height and VJ or power output?) since they do more work.Second, it is hard to do inter-individual comparison without controlling the depth in some way. Depending on the individual style of jump, some players will produce more power than others. With the data I have at the moment, I don’t see any correlation between P20kg (external power and NOT total system power – which brings me to the topic of different power calculations) and VJ performance (and not even correlates with 10m, 505 or any other performance test; but let’s wait for more samples). This might mean that the individual might change the jumping style to reach highest VJ or to reach highest power output readings. Then it might be important to think what kind of feedback are we giving to the players – power readings or vertical height reached (it might be smart to tell them to jump highest without reporting power reading since this might influence the power score for the guys who have some physics background by adapting their jumping style:) )It is probably ok to compare the intra-individual performance (for example changes in my power readings over time) because of the same jumping style, but I question its use to compare individuals (in terms of power) WITHOUT some way of controlling the depth (dip). I would really love to hear reader’s experience with this, along with possible studies on this (VJ and P20kg correlates). It might be interesting to see correlates between power output using different methods (external power, total power, relative external, relative total, etc) during free countermovement jump, regulated countermovement jump (certain depth/angle) to VJ (and 5-10m sprint as well),  and to power outputs within different ways of measurement. If someone know a study like this, or studies, please let me know. Dan Baker sent me his study on correlates between Power and 10m-40m sprints. I will try to find and read some studies on these issues.

When we did testing at the beginning of the pre-season we used Smith machine and the players jumped from pre-calculated height where they take 90 degrees in the knee. But that means concentric only. If I remember correctly the researchers used total body power (they used 90% of BW plus 100% BW on the bar) dived my body mass. Yes, power measurement is confusing (I suggest the readers to check the papers by Cormie et al.). So, I suggest when someone discuss power training, correlation or anything one needs to ask the following questions: