Force-Velocity Curves – the Good, the Bad, the Ugly

Force-Velocity Curves – the Good, the Bad, the Ugly

The force-velocity relationship is central to many theories of training, as well as in various practical approaches. For instance, in Zatsiorsky’s “Science and Practice of Strength Training” (1) — which, in my opinion, is one of the few Eastern European manuals that’s actually comprehensible by us ‘westerns’ — there is a pretty figure (see below) which shows that various types of training have various effects on an athlete’s force-velocity curve. 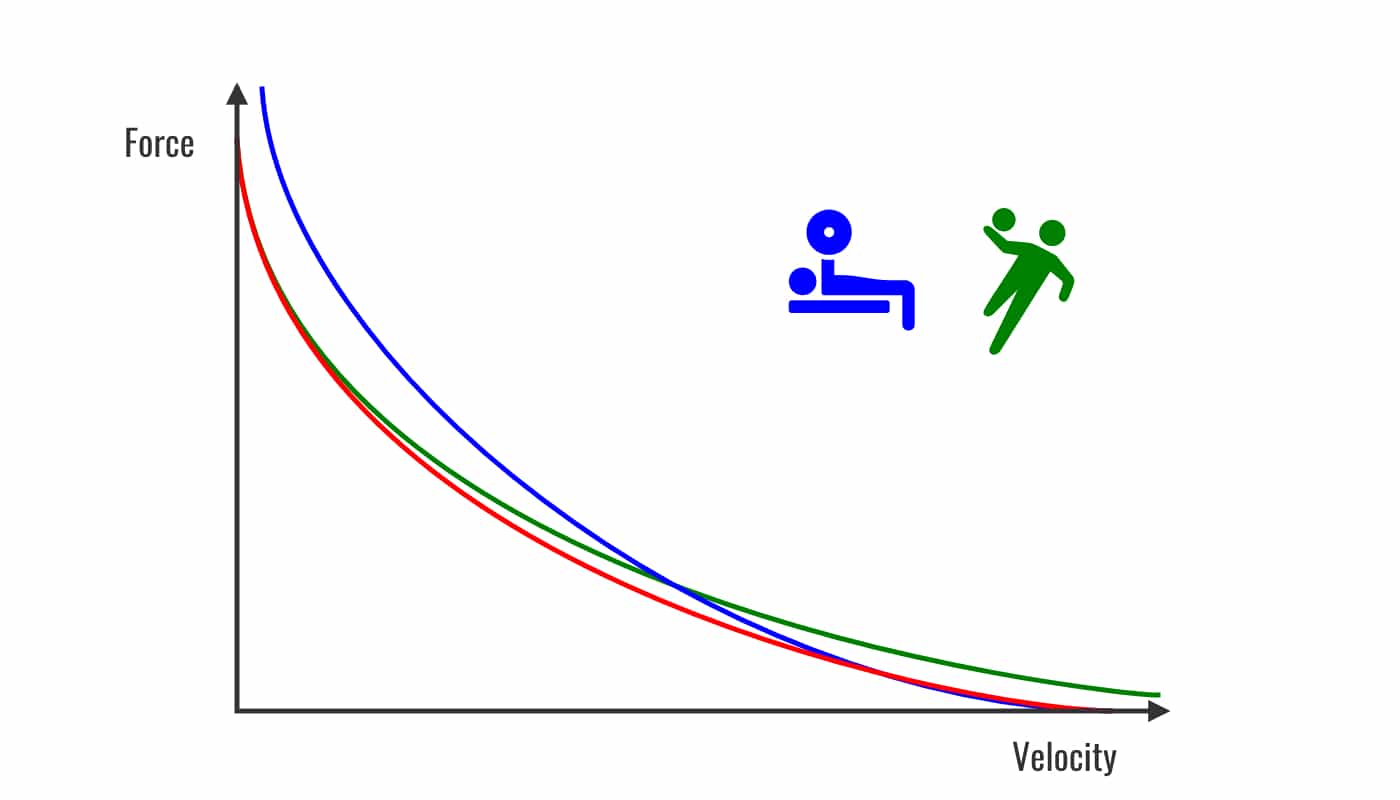 Makes sense, right? Back in 1938 Hill had already demonstrated that muscles abide this hyperbolic law: the higher the resistance a maximally stimulated muscle has to overcome, the slower it is able the shorten (2). And considering that adaptations are specific, maximal strength training probably has the most impact on the left side of the curve, whereas more explosive work tends to impact the curve more to the right. Still, we need well-rounded athletes, so we should provide “stresses that allow for a more complete adaptation to occur across the entire force-velocity curve” (3).

It’s a nice story. But I have problems with it. Let me tell you why.

Very well, let’s start on a positive note for a change. There are certain circumstances in which a force-velocity profile could be a very useful tool for analyzing and improving a specific movement pattern. The main context that jumps to mind (pun intended) is that of two-legged vertical jumping, as demonstrated by Samozino & Morin and colleagues (4). They have also provided evidence for force-velocity profiling being useful in sprinting (5), but admittedly I haven’t looked into this much yet. Short and sweet, right?

Now let’s start the rant. The aforementioned researchers have quite clearly stated that an individual’s force-velocity profile as obtained by jump squatting, should not be extrapolated to movements other than vertical jumping. Nevertheless, many in practice and even in research seem to have completely missed this message.

For instance, there is a peer-reviewed publication in which the authors make broad-sweeping statements about force-velocity capabilities of very different kinds of athletes, purely based on jump squat measurements (6). Many of those athletes rarely, if ever, jump (vertically) though… And on a side note, in the introduction they refer to a study by Maarten Bobbert (which I will refer to in a minute as well) while more or less stating the opposite of what he meant. Moral of the story: even peer-reviewed studies may be of very bad quality. 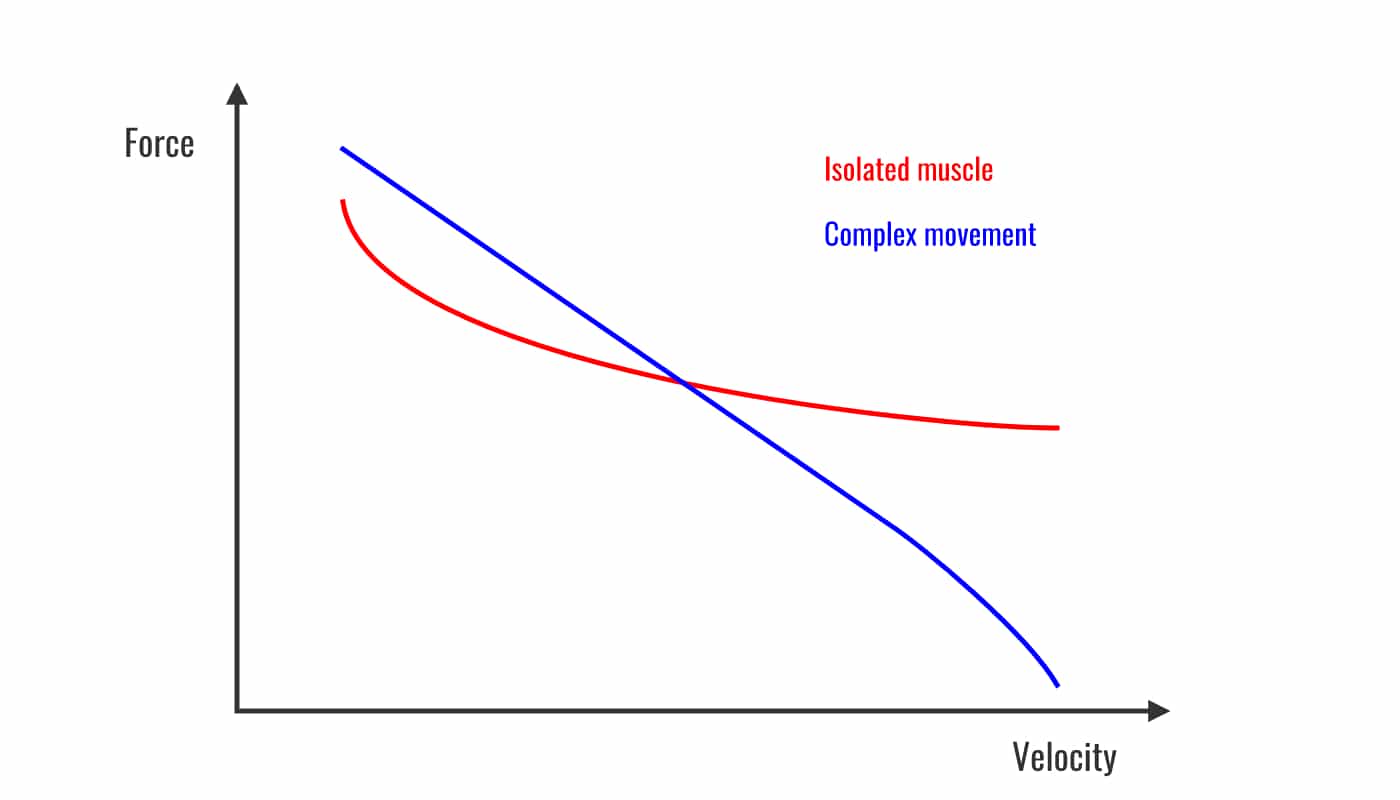 But who cares, right? That’s just a minor detail: an increase in speed is still associated with a decrease in force. Unfortunately for those who don’t like to look past the end of their noses, it’s much more than a detail though. The discrepancy reflects the fact that there is far from a one-to-one relationship between the contractile capacity of muscles (as determined by Hill) and the power output of complex movements.

In fact, the contractile capacity of muscles only partly determines the power output of complex movements. Segmental dynamics probably play a (much) more important role (10,11). These dynamics refer to the fact that in most complex movements the rotations of body segments are transformed into translation (of the body’s center of gravity or the end effector). And especially when movement velocities get higher, these transformations result in a lot of muscle power output being ‘wasted’.

If we truly wish to understand complex movements, we have to stop extrapolating phenomena such as Hill’s relationship beyond their original context. Rather, we have to start figuring out (among other things) how the central nervous system takes segmental dynamics into account when coordinating these movements (12).

My point is that THE force-velocity curve of — for example — the lower leg musculature, does not exist. After all, the output (force, velocity, power, etc.) of a complex movement is strongly dependent on the specific neural control of involved muscles. Thus, you always have to take into account the specific movement pattern that you wish to improve. Just squatting with a variety of loads to “allow for a more complete adaptation to occur across the entire force-velocity curve” and expecting transfer to all kinds of movements is delusional.

So yes, I generally recommend training with a strong focus on the actual movements that occur in the particular athlete’s sport. Of course, in order to increase the contractile capacity of muscles there still might be a case for more traditional resistance training. But is this a strong case? Is it worthwhile? That’s another story altogether. I shared some of my thoughts here (scroll down to “A lifeline for strength training?”).

The literature on strength training emphasizes the importance of various ‘force-velocity’ and ‘force-time characteristics’. These ‘parts’ are said to determine sports performance, just like wheels determine the workings of a clock. This (implicit) mode of thinking — also known as mechanicism — has a fundamental flaw however: mechanical systems cannot control themselves. Therefore, mechanicists have to resort to dualism, which becomes evident in statements that not only strength is important, but also “the ability to use this strength through coordinated body movements” (13).

Complex systems — such as the human body and movement — are much more than an assembly of independent parts. We have to think more in wholes from the get-go. In the whole of human movement, the central nervous system plays a key role. But while viewing an authoritative review of “The Importance of Muscular Strength in Athletic Performance” (13), a ‘Ctrl + F’ only yielded 3 hits for “neural” and exactly 0 for “central nervous system”, “brain” and derivatives. Make of that what you will…

I operate at the interface between physical preparation and skill training or — as I prefer to say — I practice and preach Movement. My base of operations is the Amsterdam area in the Netherlands (yes, I’m Dutch), where I work with up and coming athletes but also with everyday people who simply seek to enhance their movement capabilities.

I was a competitive judo athlete — affectionately called “World Champion Training” by some — and still enjoy throwing people every now and then. Nowadays I zealously try to pick up (movement) skills from all kinds of disciplines though, which means I look clumsy more often than I care to admit. Besides that I enjoy big picture thinking, which explains my current focus on complex systems science.