I have corresponded with Ryan Williams, physical preparation coach from USA, after reading the American Football Physical Preparation book that he co-authored with the legend in the field Coach X Buddy Morris and my long time interned buddy James Smith. Ryan was kind enough to write an excellent guest article for my blog regarding the theoretical frame the mentioned coaches utilize in their training systems.

The article will be posted in two parts. Enjoy! 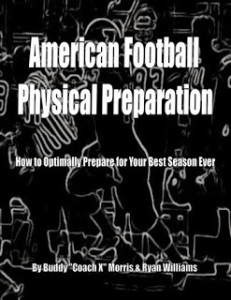 Biology gives us principles, laws and systems to help us structure the plan, the program, and organize it all into an optimal matrix to effectively and efficiently achieve a destination, objective, goal, event, date, or desired adaptation.For physical preparation, there are three biological principles that are the pillars of planning, organizing and programming training.  They are bioenergetics, bio-motor abilities, and biodynamics.*Note: Biochemistry is tightly intertwined between all three (but mainly bioenergetics and bio-motor abilities) of the biological principles.  Briefly, some of the most important parts of biochemistry to understand are: the splitting of ATP, total creatine phosphate in muscle, synthesis of proteins from DNA & RNA, accumulation of H+ ions, amount of lactate in the blood, catecholamine concentration, enzyme levels, and a host of other important processes, mechanisms and pathways.  For the purposes of this article, we will leave biochemistry alone as the biochemical adaptations are a result of the training executed and are realized through a sound knowledge of bioenergetics, bio-motor abilities, training modes, training methods, and training means.

1. Bioenergetics – “the flow of energy through the human body”

With bioenergetics, the most pragmatic way to look at the efficiency of one system is to use a dichotomy of output and capacity.They are defined below (Zhelyazkov & Dasheva, 2001):

2. Bio-motor abilities – “independent abilities that enable an individual to perform a given task under specific conditions”

Note: The below classifications are a synthesis from a number of authors’ works.  Really, this is how I personally view bio-motor abilities, from studying the work of the listed authors, and using various methods and means, pragmatically–with myself and my athletes.  The main frame of speed, power, strength, stamina, suppleness, and skill comes from Mel Siff & Yuri Verkhoshansky in Supertraining. The six main abilities and their subcategories are:

To me, speed is synonymous with sprinting. Obviously, speed will hold different meaning depending on the sport or game you are programming for.  For the purpose of this article, I am focusing on speed as it relates to sprinting.  Any type of speed that is needed in competition that is not related to sprinting is developed via special developmental or competition exercises.  The work of Charlie Francis was the biggest influence.

When it comes to power, there is maximal power, which would be displayed in a power clean, snatch, broad jump or something of the like.  For power endurance, it is a single exercise, which by nature displays a high amount of power, repeated multiple times, in one set. The work of Dr. Fred Hatfield is the framework of practical applications for power; it is synonymous with force.  His work with barbell lifts is used as the percentage applications.  Obviously, various jumps and throws can also develop power, but the load is different than that of a barbell lift.

Yuri Verkhoshansky’s definition of strength, from the Special Strength Training Manual for Coaches is used.

*Strength endurance and hypertrophy are given an asterisk because they are not defined in Verkhoshansky’s strength taxonomy, but they obviously must be developed in a physical preparation program.

As for stamina, they are two parts that make the whole.  Again, I view endurance as being able to complete one bout for an extended period of time.  This would be a marathon, mile run, a single set of 20 reps or anything else similar that you can think of.  For capacity, this is the entire amount of work done, by one system, bio-motor ability, or the collective amount of work done by multiple systems or bio-motor abilities, like a team sport game or the decathlon.

Skill is probably the most complex and loosely defined bio-motor ability.  For me, I see three subcategories that make up skill.  They are: coordination, technique and tactics. Obviously, which each different sport or game, comes a different need for each of the three subcategories.  Coordination is the ability to combine and use the following qualities: fluidity, precision, consistency, intensity, speed, and amplitude.  This comes from Kurt Meinel’s motor quality framework.  Technique is the ability to execute the desired form of the competition exercise or movement.  This, again, depends on the type of sport or game.  Obviously, there are different techniques for powerlifters, weight lifters, sprinters, throwers, which are not as variable as the techniques between positions in team sports.  Finally, tactics are the understanding of the structure and rules of the competition (and in the case of team sports, the team).  This is a psychological ability that the athlete must have in order to avoid any sort of penalty or infraction from an official or coach.

3. Biodynamics – “the complex of all interactions between internal and external forces, which is formed during the solving of motor tasks”

There are four categories of exercises based on the structure of the sport, event, or game (Bondarchuk, 2007):

General Preparatory: when executed, these exercises do not repeat the competitive actions as a whole or their separate parts.  Other muscle groups take part in the work being done.  The functional systems of the body are activated but do not ensure an increase of the result in a competitive exercise.  General preparatory exercises also know as general physical preparation (GPP) appear as a means of all-round development of the individual, and have a positive influence on increasing the general level of work ability and coordination. At the same time, their uses with other forms of exercises serve the flow of the restorative processes (active rest).

Special Preparatory: These exercises as the general preparatory exercises, do not repeat the preparatory competitive actions as a whole or in their separate parts. However, they use exercises similar muscle groups in their execution. The training work serves to activate the functions and body systems from which an increase in sports results in the main movements depend. Identical or close to identical regimes of muscle work and different functions of other systems are involved.

Competition: In the theory and methods of physical education, the acting definition or exercises understanding is “sport event”, in which the athlete participates in competition. The exercises are executed in the process of competition as well as in training. In the latter case they can model (repeat) the competitive conditions in easier or more difficult conditions.

The definitions of the exercises come from Anatoli Bondarchuk, while the theory of biodynamic structure (Verkhoshansky & Verkhoshansky, Special Strength Training Manual for Coaches, 2011) comes from the work of Nicolai Bernstein and Yuri Verkhoshansky.

Before we continue, I need to address something that is extremely important.  Most coaches understand this, but to cover all bases, I want to make sure I address this first.  Obviously, if you read between the lines and look into the definitions of each bioenergetic system, bio-motor ability and biodynamics, it’s hard to see where to draw the line between general and specific, strength and power, endurance and capacity, mobility and flexibility, and a host of other muddy dichotomies.  Simply put, there is no possible way to completely isolate any bioenergetic system, bio-motor ability, or biodynamic structure.  The way the human body works does not allow for that to happen; our bodies are far too interrelated and intricately intertwined to produce a physical effort exclusively.  Fuzzy logic and chaos theory allow us to breathe much easier when we plan, organize and ultimately design our training programs.  We are able to realize that everything is not black and white, rather, it is gray.  They are many ways to achieve and develop an adaptation in the human body.  As coaches, we should remember this advice from Thomas Kurz, when planning, organizing and planning: “training is efficient if the highest sports result is achieved with the least expense of time and energy” (Kurz, 2001).