In the previous blog post I discussed the evidence for eccentric versus isometric hamstring fascicle functioning during the swing phase of running and concluded that we have more confidence in the predominantly isometric fascicle behavior found in animal studies than the partly eccentric behavior found in modelling studies (Van Hooren & Bosch, 2018). However, these findings do not necessarily rule out an eccentric hamstring fascicle action as the cause of a hamstring injury.

Inability of the fascicles to remain isometric

Several studies have investigated fascicle behavior during drop jumping (Ishikawa, Niemelä, & Komi, 2005; Sousa, Ishikawa, Vilas-Boas, & Komi, 2007). These studies showed that the fascicles of the bi-articular gastrocnemius medialis generally shorten or remain quasi-isometric during the ground contact phase of the drop jump. However, when the drop height is increased beyond a certain height, the fascicles ‘suddenly’ actively lengthened during the ground contact phase (Figure 1). At this point, the forces may simply have become too high for the fascicles to remain isometric and they therefore lengthened. We hypothesized that this may also occur during the late swing phase of maximum speed running when the forces acting on the hamstrings are high (Van Hooren & Bosch, 2017a, 2018). However, it should be noted that the maximum forces acting on the hamstrings during running are around 5 times body weight and this is considerably smaller than the forces during the drop jumps, where active lengthening occurred at 10-12 times body weight. An inability of the fascicles to remain isometric during running may therefore only occur with poor coordination or due to fatigue, which decreases the force producing capability of the fascicles. This may explain the associations found between fatigue or poor fatigue-endurance and hamstring injuries and suggests that improving the capability of fascicles to remain isometric while experiencing high forces and fatigue may prevent injuries (Van Hooren & Bosch, 2018).

Figure 1. (A) Gastrocnemius medialis muscle-tendon unit length, (B) fascicle length and (C) muscle activity during the ground contact phase of drop jumps performed at three different intensities (low, optimum height and high dropping height). The vertical dotted line indicates the moment of ground contact. The red dotted circle in B shows lengthening of the fascicle during the highest drop height, while the fascicle continued shortening at the lower and optimum height. Adapted from Ishikawa et al. (2005).

All hamstrings except for the biceps femoris short head are bi-articular, meaning that they cross two joints: the knee and the hip. A modeling study has found that the erector spinae and in particular the iliopsoas of the contralateral hip have a large influence on biceps femoris muscle-tendon length during high-speed running because they can induce anterior pelvic tilt, which increases the length of the hamstrings (Figure 2) (Chumanov, Heiderscheit, & Thelen, 2007). Other muscles such as the oblique muscles can however counteract anterior pelvic tilt. As a result, poor lumbo-pelvic control may lead to anterior pelvic tilt, which may increase the susceptibility to hamstring injuries by inducing (repetitive) active fascicle lengthening. Indeed, a recent small prospective study showed that four soccer players who sustained a hamstring injury during an 18-month follow-up had previously exhibited greater anterior pelvic tilt and lateral flexion of the trunk during the flight phase of high-speed running compared to 25 players who did not sustain an injury (Schuermans, Van Tiggelen, Palmans, Danneels, & Witvrouw, 2017). These findings suggest that poor lumbo-pelvic control increases the risk of hamstring injuries and training of lumbo-pelvic control may therefore reduce the risk of hamstring injuries. 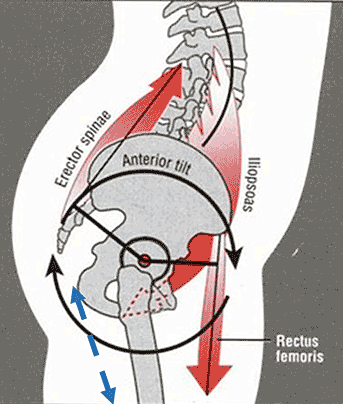 Figure 2. Anterior pelvic tilt (black arrows) will lead to an increased length of the hamstrings (here indicated by the blue dashed line). Muscles that can induce anterior pelvic tilt include the erector spinae and iliopsoas and to a lesser extend the rectus femoris and vastus muscles.

Bas Van Hooren is a sport scientist, athlete and freelance strength & conditioning specialist from Maastricht, The Netherlands. He graduated from a MSc Human Movement Sciences in Maastricht University in 2016 and is currently preparing his own PhD research. Bas has written several peer-reviewed publications about various sport science topics, including muscle-tendon unit functioning, transfer of training, injury prevention and post-exercise recovery. He frequently shares new information on various sports science topics on his social accounts.