This is a Part 2 of the HIIT Drills and a sequel to the HIIT Conditioning article series.

In the first part, What You Need To Know, I have presented the basics, as well as the introduction to the High Intensity Interval Training (HIIT). I have also talked mostly about HIIT Prescription. In the HIIT Drills – Part 1, I focused on the first two categories – Long Intervals and Short Intervals.

In this article, I will cover the remaining three categories: Sprint Interval Training (SIT), Repeat Sprint Training (RST) and Intermittent Recovery. I have also created a HIIT Methods table, which can be very useful.

These article series are going to be put together into my upcoming book. Also, a new software that I mentioned few times in the article – HIT Builder,  is now available for purchasing in our Online Store »

Sprint interval training is, more or less, sprinting all-out for more than 15-20seconds. Some coaches call it lactate production, or lactate tolerance training, but I don’t prefer to call certain methods based on assumed mechanism or process involved, but rather based on phenomenological characteristics of the training itself. In track and field circles, these methods are usually called specific endurance and intensive tempo, but the terminology differs a lot because objectives of these workouts differ between the coaches.

When it comes to HIIT, sprint interval training (SIT) can be classified to intensive and extensive variations.

Intensive SIT is truly all-out sprint, done for 15-20+ seconds (up to 45, or even longer) with almost complete recovery in between. In track and field circles, this type of workout is usually called specific endurance, but it is done will full recovery between the repetitions, and that involves resting for 30-90sec per second of activity (e.g. 15sec all-out SIT would involve 8min to 22minutes of rest, which is 1:30 to 1:90 work-to-rest ratio). This is because the goals of sprinter differ to goals of HIIT conditioning. In the latter case, the rest is substantially shorter, usually around 2-6 minutes (depending on the duration of the sprint) and the work-to-rest ratio is around 1:6 to 1:8 or more. Having said this, it is important to expect drop in performance across repetitions, so using %ASR to prescribe beyond the first sprint could be too optimistic and hence problematic.

For this reason, take the suggested %ASR as a starting point solely, and not something that should be hold strictly. In a way, using distance instead of time in intensive SIT can work well – e.g. using the HIT Builder (Tempo Builder (Distance) tab) calculate the initial distance for 20 seconds. Then repeat that distance all-out and allow for time to extend as fatigue sets in. It is the art of coaching to figure out how much fatigue we want to accumulate and what should be the allowed % drop (e.g. if that 20sec extends to 25 seconds we should probably call it a day; T&F coaches would call it a day much earlier though, but they have a complete rest between reps).

Using our six athletes as an example, here is how the workout can be planned. We decide to do 20 sec intensive SIT. Here are the distances:

One thing to keep in mind is to use start loss metrics and start conservatively with distance (better to go under for 20% than over for 5% – asymmetry as Nassim Taleb would call it). Besides, team sport athletes are not used to this type of training and can easily break havoc (e.g. sore or pulled hamstrings, calves or quads). The solution might be to do this in shuttles with COD, to avoid building up the speed too much (gassers anyone? or 150-300 yard shuttles?). In this case you can use the HIIT Builder to help you estimate the distances, but always use your intuition here and adjust as you seem fit.

In the above case, you can prescribe time zones, e.g. from 21 to 23 seconds across repetitions (I have added 1 second start loss, although more can be added) for everyone to follow.

Another approach would be prescribing the same distance for everyone and assigning times to groups. Let’s say 200m:

Putting the lads on the same line can cause competition between them, and that is always good for increasing motivation and hence effort (especially in all-out intervals). Therefore, from this viewpoint, prescribing distance rather than time, and allowing everyone to compete, can be a nice trick to milk-out maximal effort and make it more fun (which are not factors of low importance, au contraire). Each group can have a time zone they should strive to, otherwise they just might slack (although slacking sometimes can be due to the day-to-day variation and mood, not only being a slacker; again importance of art rather than numerical science).

Here is the table for %ASR for the first repetition of the intensive SIT intervals, when prescribed using time. 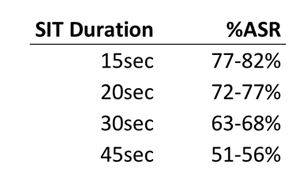 Some coaches prefer to do hill sprints (me too), and in that case the HIT Builder should be used only used as a rough estimate. But in my experience, coaches usually prescribe same distance to everyone for the hill workout and instruct them to run all-out. In this case, the ‘equal playing field’ is lost, but we allowed some self-regulation of the athletes. Assuming the athletes can be trusted to give good effort, there is no need to specially prescribe time or distance and make things more complex than they need to be. If all your HIIT drills are strictly prescribed and directed by you, the “Hitler coach”, then maybe some HIIT drills should be left to athletes to self-regulate, especially the all-out intervals, which are really hard to predict from rep to rep, day to day.

Long story short – when using intensive SIT, prescribe using distance for everyone so the competition can happen, try to do intervals in shuttles (e.g. 6x40m), get some ball-park where athletes should be, in terms of their time using HIT Builder, but allow for time zones and accept certain drop across repetitions.

Using the similar logic with tempo HIIT, extensive SIT can be calculated using either 80-90% of mean velocity on the distance, or 70-80% of %ASR for a given distance/time. Table below contains recommendations for extensive SIT using time prescription and 70-80% of %ASR:

Both approaches of extensive SIT prescription can be conducted using Tempo Builder tab in the HIT Builder. It is important to note that, due to the fatigue accumulation, repetition distance and time will get progressively worse. In this regard, the ASR values from the table represent only starting values. With extensive SIT, the organization should be more strict, as opposed to intensive SIT, because we do not want athletes to race each other. It would be wise to create group of specific distance that needs to be covered or time over predefined distance, as well as to allow for some performance decrement over the reps.

Organization wise, the easiest way would be to prescribe shuttle-based or straight line distance for everyone, and then assign times to groups of similar characteristic. Due to the fact that the times between repetitions are long, each group can go separately and hit their own prescribed time. For example, on the picture below we have 4x60m extensive SIT, done with 1 sec start loss correction and 0.7 COD loss correction at 85% of velocity for that distance. Athletes are grouped into 3 groups, each starting on their own and having designated time. While waiting, others can perform some easy technical drills, or some prehab, or core movement. 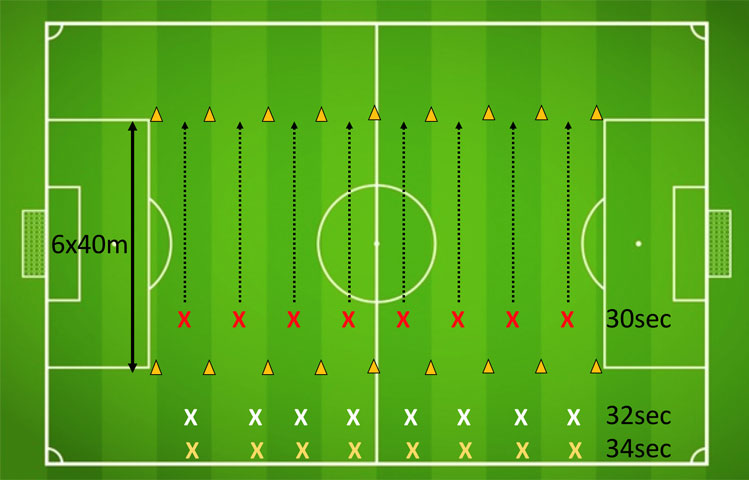 Setup above can also work for an intensive SIT, although “all-out” command can be given, and athletes can be set up in groups of similar ability, as well to allow closer competition between them. Some playful game can be done, e.g. collecting points in each group and losers from groups need to pick up the cones.