Providing program examples is always tricky, since there are a lot of assumptions involved and it is hard to make it usable in multiple scenarios with different objectives. But as avid reader of strength and conditioning literature, I always appreciated a sample program, regardless of its limited applicability in multiple scenarios. For this reason, I will provide few generic examples (or should I call them minimum viable programs – MVP) for team sport athletes (mostly having soccer athletes in mind) that could be done during the off-season, pre-season and in-season. This will give you a starting point that you can use and modify to suit your objectives and context.

It is important to keep in mind that these programs should be put in context with other training components (skill and practices, strength, speed, power training and so forth) and these can vary a lot from case to case. It is beyond this HIIT Manual to go too deep into overall program design and periodization that takes all training components into consideration.

Playing your sport (in this case soccer) and SSGs (Small Sided Games) is always a preferred method of getting in game-shape. Unfortunately, sometimes that is not possible nor preferable. For example, being a free-agent and wanting to get in shape, coming back from the injury (although soccer practices are a must element of a good RTP – return to play – program), or during off-season where one wants to have a mental break from the ball and so forth.

For these reasons I’ve designed a simple running program for running-based sports, something that you can use with your athletes on the break or have it in your toolbox and apply it if needed in the RTP protocols or as extra conditioning.

The program is based on four 2 to 3 week long blocks: 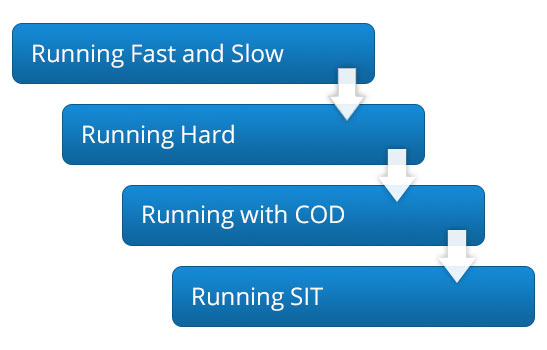 Each training blocks consists of 2 HIIT workouts and 2 extensive runs, which are usually performed on Monday, Tuesday, Thursday and Friday, although the specific schedule depends on your context. During the off-season, where there are no team sport practices, it is important to accumulate volume of lower-intensity running together with HIIT conditioning, ideally achieving polarized training distribution (Fitzgerald, 2014; SEILER & TØNNESSEN, 2009; Solli, TØNNESSEN, & SANDBAKK, 2017).

The following table contains the workout content of each training block.

Using this program will make sure that your athletes are coming ready-to-train from the off-season (or RTP), while providing individually tailored workouts that are not too boring to be performed.

If the name of this phase reminds you of Daniel Kahneman’s book “Thinking Fast and Slow”, you are right. The goal is to perform workouts from two opposite intensity extremes: slow and fast, achieving a strategy very similar to what Steve Magness described as funnel periodization (Magness, 2013).

Tempo runs are fast and quality runs done faster than 130% MAS (see chapter on Tempo runs for more details). Repetition durations for this workouts are around 15-20sec with rest period of 40-60sec.

The goal of this workout is accumulating volume of faster quality runs without draining your body. By using tempo runs you will be able to work on your running form and prepare your body for the hard runs to follow.

I will provide tempo workouts based on time, but you can quickly adjust by using distance instead (using HIT Builder). Here is the progression you can use:

To improve your endurance you need both intensive and extensive running (Fitzgerald, 2014; Magness, 2013; SEILER & TØNNESSEN, 2009; Solli et al., 2017). Extensive run is going to be your bread and butter we are going to keep doing through all blocks. You are also going to be able to modify this run to suit your preferences, but more on this later.

You are going to perform extensive run in interval fashion as well (which will make them a bit faster and on the border between LIT and MIT; see Endurance Map). Usually your extensive runs are performed at pace slower than 60-70% MAS. You can also go by feel or use heart rate monitors (in that case running less than 80% HRmax or less than 140-160bpm). When in doubt – go slower. The goal is to polarize the running volume distribution and avoid the middle zone (see MIT in Endurance Map). Otherwise, the extensive runs will make you too tired for more intense HIIT workouts. Having extensive runs in interval format makes this harder to achieve, so it bears repeating one more time: when in doubt – go slower.

In the following table you can find the progression for the first block:

During the recovery period in between runs in Running Fast and Slow training block, you are going to perform the following bodyweight (BW) exercises:

You are going to progress on these exercises as well during the workouts:

You should be able to perform these back-to-back with no rest under 3-4 minutes.

During the phase two we will continue performing extensive runs, but we will change tempo runs for long intervals (LIs):

Members Only! To Continue Reading This Article, Choose the Best-Suiting Plan and Join Us Today »

Winter is Here and Our Prices Are Waaaay Down!
Take Advantage of Our Promo Offer Below