How to Adjust Generic %1RM Table for Higher Reps With Lower Body Lifts?

How to Adjust Generic %1RM Table for Higher Reps With Lower Body Lifts?

It is pretty common to use generic %1RM tables when prescribing weight training, both for upper body and lower body movements. As with everything, there are pros and cons of such an approach – it tends to vary depending on the type of the lift, bodyweight, level and gender of the lifter, muscle fiber dominance and so forth. There are couple of ways around it which I have covered in recent articles.

What I want to present in this blog post is one more idea that might work and hopefully make sense. Take for example the bottom table:

The table above shows weights than needs to be used for different levels in strength for squat and bench press to hit certain max reps. For example, if I improve my squat from 100 to 150 and to 200kg (1RM), my 10RM should (theoretically) improve from 75 to 112.5 to 150 kg. Theoretically. Similar calculations for bench press (just lower 1RM).

Taking individual variation out of question, what is striking is that we use same the generic table for (1) different exercises and (2) different strength levels or across lifting career.

It is common to believe (I guess Charles Poliquin wrote first about it, or at least I’ve read it from him first) that as one’s strength improves (e.g. from 100kg to 200kg 1RM) numbers of reps that could be performed at certain %1RM drops over time (e.g. beginner can lift 75% for 10 reps, while advanced lifter might do it for 7-8 reps). I have spoke with Mike Tuchscherer regarding this issues and he basically said it is vice versa for him (Note to Mike: please correct me if I misinterpreted you here). Anyone willing to share his data on this issue please chime in on the forum. According to some of Mike’s tables, he is able to perform more reps on bench press then on squat at the same %1RM.

Also, it is common to see corrections in percentage used for lower body lifts in introductory cycles which are usually done with higher reps (e.g. 10 to 12). On the following table is Dan Baker’s pre-season progression for Broncos 2006 general preparatory period: 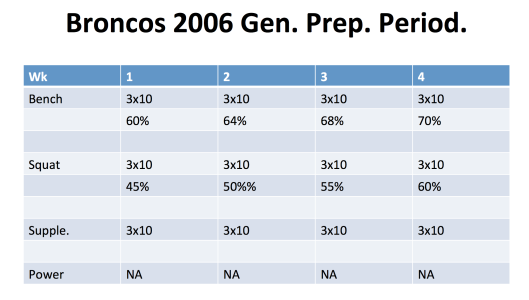 This is pretty logical move, taking into account coming from a lay-off period and doing sets across (same weight for all working sets and same reps). One just cannot expect athlete to be able to complete same reps at same %1RM for multiple sets in squat and bench and induce same level of exertion and fatigue.

What I was interested into was the why behind these two concepts.

The solution is simple – how much bodyweight are you lifting in the bench press? Basically only your arms, which accounts to 10-12% of BW. With squats, one is lifting everything except feet and lower legs (which account to 12-15% of BW).

If we apply the same logic to squat, but we use 85% of bodyweight lifted for someone weighting 100kg we get the following corrections: 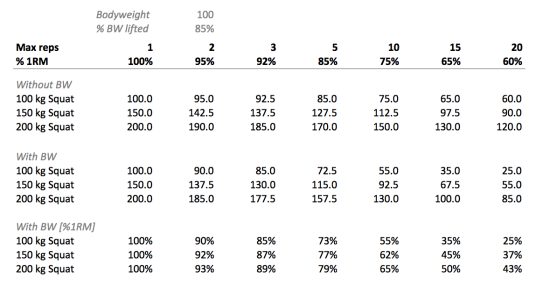 If we plot the difference between using generic rep max table and corrected approach for 150kg squat we get the following graph:

As we can see the difference becomes bigger as we move toward high rep zone. This explains why generic percentages need to be corrected for  lower body movements done for higher reps.

Apparently, this is alongside Mike Tuchscherer’s experience – as one get stronger, he tend to do MORE reps at certain %1RM (assuming his BW don’t change much).

To conclude – it seams that taking into account bodyweight with lower body lifts increases the precision of (generic) rep max table and explain some practical experiences by lifters. This need further proof because this is just thought experiment.

Members of Complementary Training can find and download the Excel workbook below.