How to Create Individualized Exercise Profile in Strength Training Part 5

How to Create Individualized Exercise Profile in Strength Training
Part 5: Do We Need This Complexity?

Why do we need this complexity with Velocity-Based approach?

What’s the point behind using START and STOP velocities to prescribe strength training instead of using percentages and reps (or rep ranges) and even RPE system? Is the complexity worth it? What do we gain?

Well, this is definitely advanced method in prescribing the load and it should be saved for more experienced lifters and probably for only main lifts in the session. Besides instant feedback (which can allow some form of competition between the athletes in the weight room by using velocity/power instead of just weight) it allows taking into account different rates of progressions and day-to-day variability in readiness. And yes, this can be also taken into account with mentioned load and reps ranges and/or RPE system, but it is more objective and it will make the lifter use hardest effort (CAT), which can, according to some studies, improve the strength/power gain.

So, the most complex way of prescribing using velocity-based approach involves  instructing the lifter to find a weight (one can use the above table with relative or absolute weights to make it easier) that is around prescribed starting velocity. Once this is achieved, one performs reps until STOP velocity is achieved. So basically, stop velocity gives you quality indicator and one continues performing sets with a found weight as long as his reps are above stop velocity.

There are couple of questions emerging. First one is how much to rest between the set? How will this affect the velocities. To be honest I don’t know and I don’t have the data for it. All I can say is that my educated guess will be that more rest will allow for less drop in the initial rep velocity, and hence more reps being done before one hits the stop velocity.

Second one is how much sets should be done. Stop velocity gives us one quality control regarding rep(s), but we might end up doing 20 sets of 1 just short of stop velocity. Hence, we need another quality estimator when it comes to number of sets. We can allow certain drop in number of reps between them before we quit, or we can calculate ‘average set velocity’, which can take velocities of all reps into account. Another way would be to allow certain drop in the initial/starting velocity. 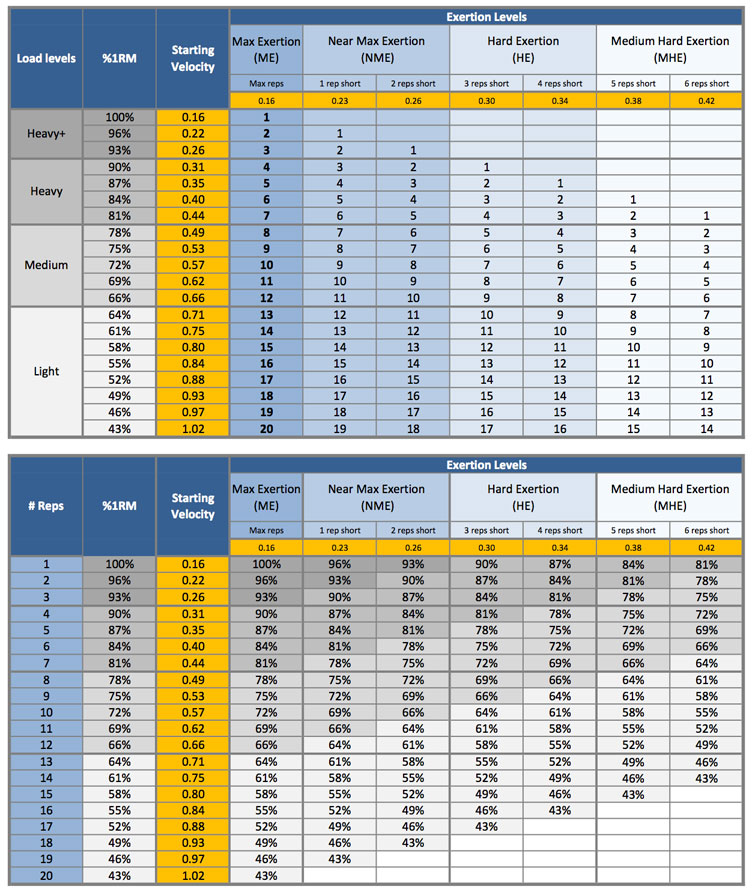 For example, I can prescribe sets with start velocity of 0.40 and end velocity of 0.30 in the pause bench press (from the table above you can see that to be using ~84% 1RM and performing 3 reps, of potential 6; use the first table for this). The first sets might look like this:

The next option might be until we reach N reps drop in a set. In first set our athlete managed to do 3 reps. We might say continue performing until you hit only 1 rep (that’s 2 sets drop). The rep drop could be ‘periodized’ depending on the emphasis of the phase – in some we might want to limit total stress/volume and prescribe zero drop, and in some we might use two or more. Mike Tuchscherer uses similar approaches in his system, and for an overview you can read THIS.

Third option might be to prescribe allowed drop in the velocity of the first rep. In our example above the first rep was 0.4 m/s. In the last set that velocity dropped to 0.34 m/s, which is 15% drop. We can use that as a way to regulate volume/number of sets. For example, we can prescribe 5-10% drop in the initial velocity.

To make this more complex than it already is, what should we do if we like performing waves, pyramids, drop sets, etc? This makes it a lot more complicated. For example, once the initial velocity starts dropping, and we are able to perform less number of reps in the ‘velocity’ zone, we could reduce the weight used and stay within the velocity zone. This can allow more sets to be done and hence higher stress.

One thing we can use if we like performing different set/reps schemes within a workout (as opposed to plateau method) is to prescribe stop velocity only. For example, I might prescribe the following:

Same as with regulation of total volume, measuring velocity gives us OBJECTIVE feedback and it is up to us to use it wisely. There is no best way to do it. One can combine percentages with velocities, only using start/stop velocities, only using stop velocity and so forth. Velocity based approach might be more a tool in your toolbox than a complete lifting system. If you ask me what is the exact velocity zone one should use, I would say I don’t know and I am not sure if something like that exists – it might depend on the individual and the objective. But if you ask me if using velocity allows more precision and more objective feedback that can allow more fine-tuning than traditional percent based approach, I would say definitive YES! It also appears that velocity, especially MVT is more stable over time, regardless if your 1RM load improves or deteriorate. This opens up a lot of practical applications in both prediction and prescription.

If you have been paying attention closely to the horizontal and vertical orange columns, you might see that there is similarity between the two.

I put them in the same table to explore the similarity.

What this mean (or might mean) is that velocity associated with a given n-RM (e.g. 5RM, 10RM) is very similar to n-th rep before failure (regardless of the load used), at least in my case. Coincidence (sampling error) or something more? I don’t know. Another idea for research

If you think about it, it does seem logical if Velocity/Exertion profile (or rule) is true (this is yet to be researched). When your lift first repetition of 3RM (93% 1RM in my case, and 110kg) you achieve velocity of ~0.26 m/s. This is also your 3rd rep before failure. And since 3rd rep before failure is the same regardless of the load use (if Velocity/Exertion concept is true), then the two should be equal. If you look at my table they are.

It sounds fascinating if this is true – that lifting your 8th rep with 10RM load (3rd rep before failure, using 72%) will produce similar/same velocity as lifting your 3RM (to be more precise your first rep using 3RM load, or 93%).  Take a look at the table/graph below. 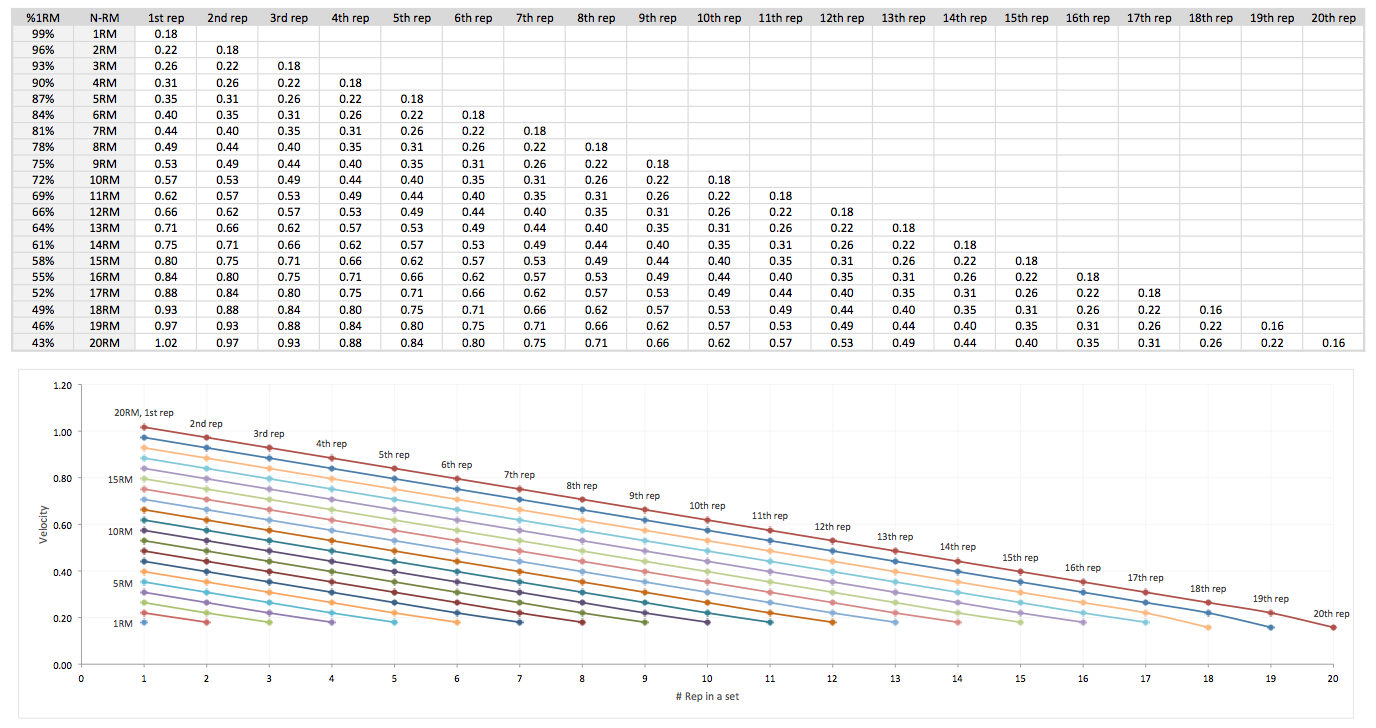 The funny thing is that this idea crossed my mind after I did all other parts. If Velocity/Exertion profile holds true, then this should hold true as well. There will be some ‘noise’ and that could include a difference in intent/effort between the reps, shorter/longer pause at the bottom (or bounce), change in technique, change in depth, measurement/technological error and so forth. But this doesn’t mean this hypothesis is false, it might be just noisy.

This, along with some other ideas, can be the topic of the future studies. I am not sure anyone did a study on this relationship and why does it happen (if it does). I think velocity-based approach can be really fruitful area of research and could be really well applied in real life settings. We still made a lot of assumptions that need to be tested in real life and longitudinally. Also the benefit of using this approach as opposed or as a supplement to the traditional percent based (or novel RPE based) should also be proven in practice and real life settings.

I will do my best to explore it more. I am more than thankful to late Rob Shugg from Kinetic Performance company and now Evan Lawton for helping me out and lending me one GymAware unit, which I consider the best LPT on the market. I am also thankful to Ivan and Vlada from the gym Teretana in New Belgrade (part of Belgrade) for helping me out with the data collection and serving the guinea pig role. 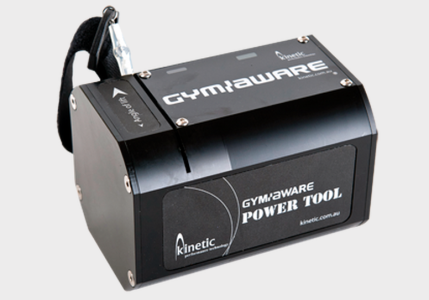 I am also open for potential collaboration on the topic, either with real world athletes (mostly powerlifters, strongman and power dependent athletes) and researchers. Anyone interested please be free and contact me on the email.