Is a COD Deficit Really a Deficit? (Part 1)

Is a COD Deficit really a deficit? – Part 1: Theoretical Approach

New idea for measurement, the logic behind, and the improvement of ”Standard model” written by Nimphius et al (2016)

Before going down the rabbit hole I highly recommend you reading the article from Sophia Nimphius and her colleagues (2016): Change of direction deficit: A more isolated measure of change of direction performance than total 505 time. It represents a base of my idea written below. Further down I named their model a “Standard model”. IMPORTANT NOTE: If you are not interested in a construct and details, just skip to the “Simple instructions and equation” part.

What is a COD deficit and why should we bother with validity?

Change of direction (COD) can be many things. Often, we describe it as a “mechanical” part of agility, but it can also appear as its standalone athletic ability. For our purpose it will represent 180° change of direction after a linear sprint.

In a similar manner, a COD deficit alone can have multiple definitions. Nimphius et al (2016) defined the COD deficit as a practical measure to isolate COD ability independent of sprint speed. The formula below is showing how COD deficit is being calculated. Basically, it’s a time difference between 10-meter time (standing start) and 505 test time.

COD deficit could also be a bilateral deficit where left leg turn is faster than the right one. But I’ll stick to the upper definition as it’s more relevant to the present text. I also won’t write about application of COD deficit in practice as it is planned for the Part 2 of COD deficit series. But for the sake of Part 1 let’s say knowing our players’ COD deficit is useful. That means we’ll measure it and make further intra/inter player comparisons. However, the idea of knowing your athletes’ COD deficit is certainly interesting but we as S&C coaches must ensure that our test is really measuring COD ability and not something else.

And this is called validity. Nimphius et. al (2016) already excluded some of “wanna be” COD tests due to a lack of validity. Those tests (e. g. L-run, T-test, proagility shuttle…) either last too long (metabolic concern) or use non-sagittal plane (roughly speaking) movements prior to COD action which is often not the case within game type situations. Don’t get me wrong, it’s nothing wrong with those tests but they are not a relevant measure of pure COD ability.

Standard model has already increased validity of measuring COD ability by introducing COD deficit point of view. Which, in my opinion is making this model the best we have right now for determining COD ability of an athlete. But let’s see if we can fine tune it… Without increasing complexity of field test execution, of course. Firstly, let’s take a look at both models (standard and improved one), which are designated in Figures 1 and 2. You’ll see that it’s all about mimicking the phases, divided into 5-meter sections. Note: Velocities are not real and are made up for better understanding. 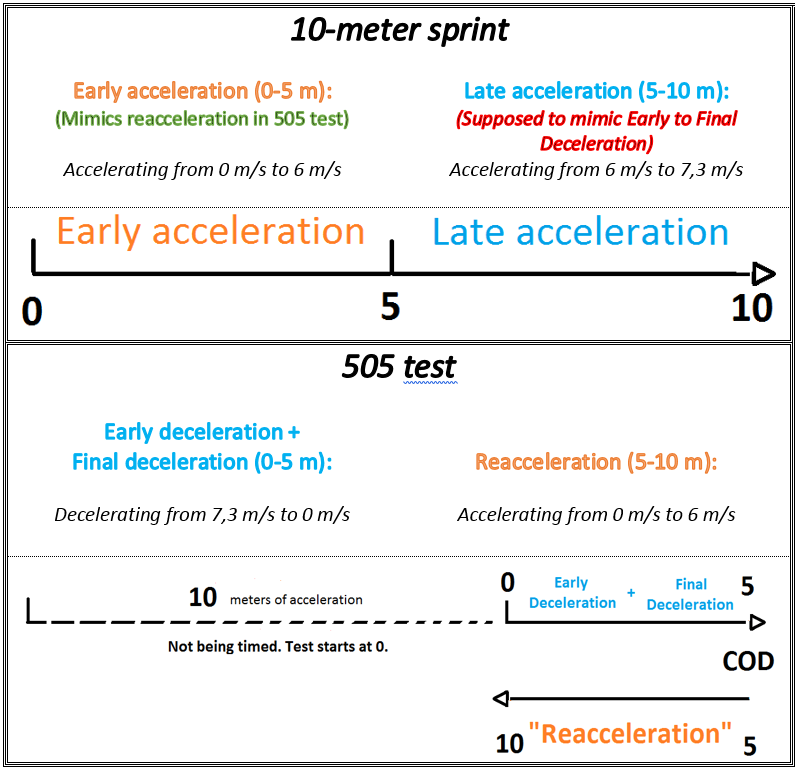 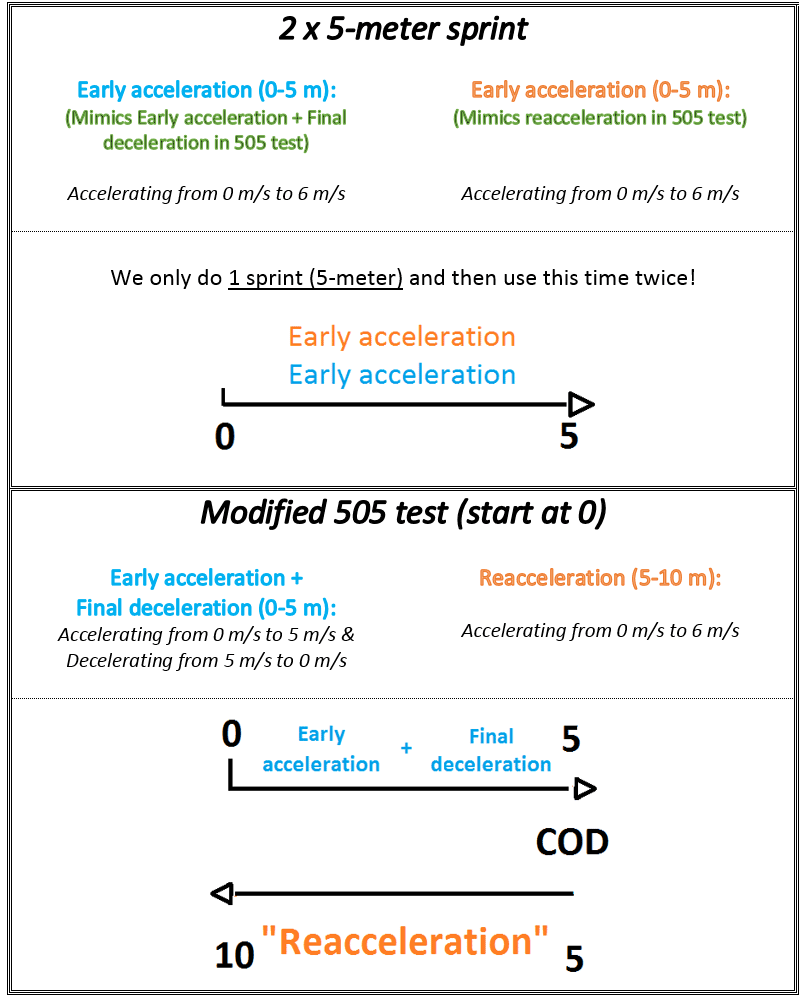 If we really want to ISOLATE COD ABILITY from noise (e. g. linear sprint), the execution of both tests (505 and linear sprint) must have as many common phases (and their distances) as possible except the characteristics which distinguish COD from linear sprint. The main characteristic here is the FINAL DECELERATION. The other, less distinct to sprint, is REACCELERATION. This one is similar to the acceleration, which is involved in the linear sprint test.

Secondly, let’s take a closer look into 5-meter phases (Table 1). At the same time, I’ll try to prove why the improved model is more accurate in determining COD deficit than the standard one. Remember, each of two phases from linear sprint test has to mimic its own phase in 505 test. This way we can minimize the influence of sprint ability in 505 test.

Table 1. Comparison of both models regarding to the 0-5 m and 5-10 m phases, respectively.

As we see in Table 1 the improved model succeeds in mimicking both phases whereas the standard model’s first phase of 505 mimicking is questionable.

Comparison of linear sprint and 505

The first part of this phase is the same in both tests. An athlete needs to accelerate from standing start. The difference comes into play in the second part of this phase where in linear sprint test an athlete continues to accelerate but in 505 test he starts to decelerate. So, everything is the same, except the COD part (deceleration), which is great. In standard model we must connect late acceleration (linear sprint) with early + final deceleration (505) which is at least questionable if not a bit misused and so making that model less accurate.

Classical 505 test as presented within Standard model is still one of the most used “COD” tests, so I will briefly touch on using it as a part of COD deficit equation. Mladen made an important note, that first 10 meters of such 505 test should be timed. It’s because athletes are “pacing” these first 10 meters as they often fear of getting too fast into COD action (doubting their deceleration abilities). So, if the initial sprint is not performed with maximal intent, we can’t say it’ll mimic this phase in linear sprint test and we can’t compare it. Roughly speaking, the first 10-meter time in 505 test should be maximally 102% (and not more) of first 10-meter time in linear sprint test. E.g. athlete with 2,100 sec time in 10-meter linear sprint test should run the first 10 meters in 505 with at least 2,163 sec if not better. If we increase “toleration zone” (from 102% to 105%), we risk to diminish validity of COD deficit result.

For the 3rd model, we must perform 2 tests. Remember, logic is the same. They are constructed to mimic each other as much as possible (except COD phase) to extract COD ability (via equation written in the next chapter).

Total 505 test:
We do the classical 505 test and time it right from the start. Therefore, athletes sprint for 15 meters, change direction for 180° and run back for 5 meters. We need 2 split times and final time. First split time is at 10 meters. We use it to compare it with 10-meter split time from the upper test for preliminary reasons. 102% rule, as written above. Second split time is at 15 meters (COD point) and we need it for comparison with total 15-meter linear sprint time from the upper test. And in the end we need total 505 test time (whole 20 meters (15+5)) to compare it with summation of total (15 meters) and first 5-meter time of linear sprint test (15+5=20). 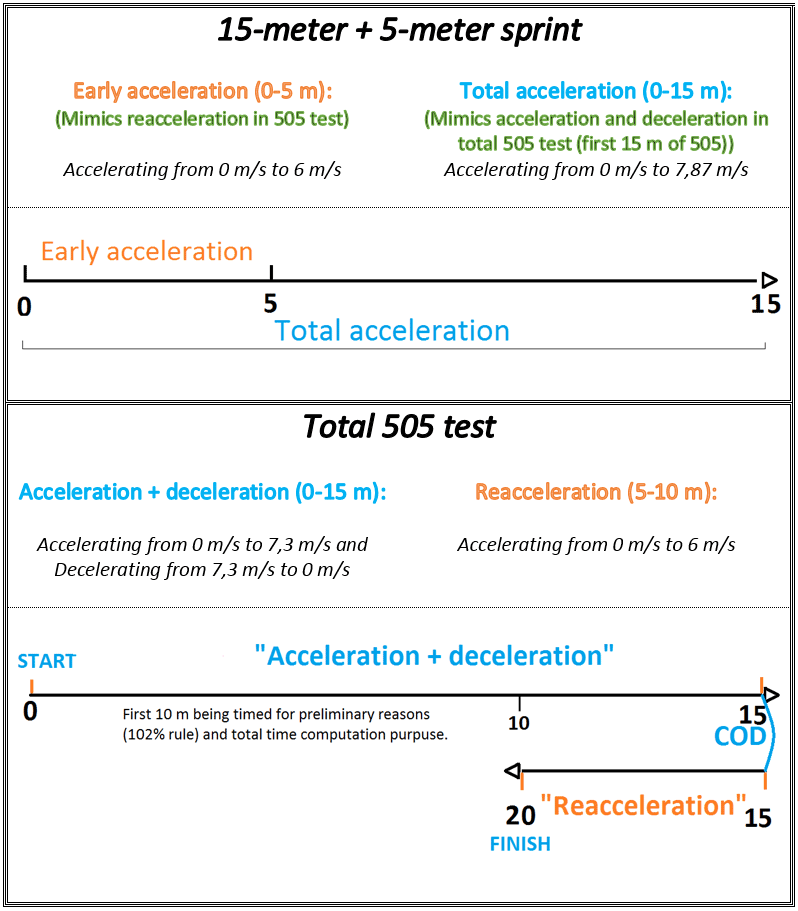 As much this model seems a bit complicated in theory, it’s very simplistic in its nature and EASY TO USE on field. All you need to do is 1 5-meter sprint and a modified 505 test as designated in Figure 2. Remember the COD deficit equation from above? Improved model’s equation is almost the same, just remember to duplicate 5-meter sprint time in order to get the same distance as in 505 test.

Conclusion and explaining the title (Is COD deficit really a deficit?)

About the purpose of this article: All of these “COD” tests are equally complicated to conduct so why not use the best one? With “best” I mean the one that adds more validity and hence more accurately targets athletes with possible COD issues.

Is COD deficit really a deficit? With improved model, maybe we’ll find out that deficit is not really a deficit as our athletes may be faster in 505 test that in duplicated 5-meter test. And maybe we won’t. So, it’s up to you, fellow S&C coaches to test it and report your findings.

Again, currently this is just a theoretical approach appearing to be near the best on field solution we could have for measuring general COD ability. I encourage you to test the improved model and maybe consider doing a Master/PhD thesis on this topic (validation).

Part 2 is coming soon, and it will cover practical side on how to conduct these two tests (5-meter sprint and modified 505) with the equipment you as a coach have access to. Be it a Freelap, timing gates or just a smartphone. If there is an interest and we’ll be lucky enough to still catch a nice sunny day, I’ll make a YouTube tutorial on the tests’ set-ups and performance. Since exact protocol still lies in my head waiting for the 2nd part to be written, please get in contact if you are eager to try this testing protocol with your athletes.

Miha Drobnič is a young S&C coach with MSc degree (kinematics of team-handball jump shot performance in elite athletes) in PE and has a deep insight in biomechanics. Being a co-founder of SuperTrening, Celje, Slovenia, which is one of the best equipped gyms in the area, he’s improving S&C field with hacks and ideas in making training, testing and evaluation of athletes easier. He is bridging the gap between the popular sport science devices and obtained results, which are often not so easy to interpret.
Amongst other, his current passion is developing an algorithm for more accurate isometric RFD measurements (therefore getting more meaningful results) and improving sprint start measuring models, regardless of the equipment available (possibly creating a standard for the future in both cases).
With his colleagues Domen and Robert, he has a vision for SuperTrening to become one of the greatest S&C facilities worldwide in terms of educating coaches and helping athletes reach their full potential.

Welcome to Complementary Training Community! › Forums › Is a COD Deficit really a deficit?