Few years ago we had a pleasure of using MiniMax GPS devices (two of them) which we got for three months testing by courtesy of Catapult. I was amazed by the simplicity of it’s use and great software that comes with it – Sprint. 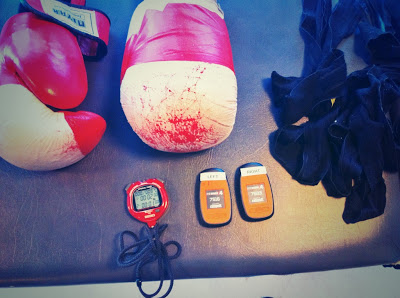 I have been playing with normal features and uses of Catapult GPS, but my wild (or weird?) spirit won’t let me alone so I wanted to experiment a bit with the units and software while we have them and try something unorthodox to GPS devices.

Actually, the GPS devices by Catapult are equipped with accelerometers (among other great sensors) which are used to get Player Load statistic. Player Load is used to estimate non-running based loads using change in acceleration (three axes). It is very usable in quantifying changes of direction, hits, feints, jumps, etc. So I decided to put the devices in indoor mode and use Player Load feature to try to quantify boxing load.

Disclaimer: Accumulated Player Load also depends on something that is called ‘dwell time’ (someone correct me if I am wrong and if this is only applied to efforts analysis) and various filters, that are used to smooth out curves and get rid of errors (like knocking the unit, or dropping it). I have decrease ‘dwell time’ for Player Load to 0,2s compared to usual 1,0s. This is used because units are meant to be wore in a ‘bra’ between shoulder blades to represent whole-body movement. Playing with these parameters might affect the analysis. This is important since the units are not meant to be used for hitting the heavy bag. It would be also more valid to have couple more units that could be wore on ankles, head gear and between shoulder blades to get the full body movement (or head pounding in sparring). Maybe next time. 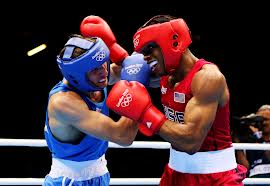 Quantifying external work in boxing was always been difficult, so the coaches relied on notational analysis, HR data (internal work), bLA (internal work) and RPE (subjective indicator). Using small accelerometers one could quantify load. This was I tried to do (as a beta self-experiment)

So I have put two devices (named LEFT and RIGHT) on my wrists and put a bandage over: 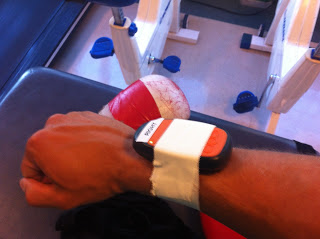 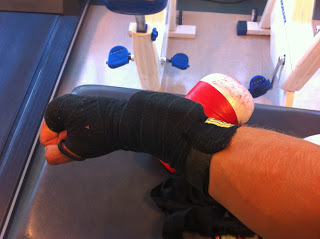 I decided to do 9 ‘rounds’ of 2minute duration and 1 minute rest. I have done the following activities just to see the possible differences:

I have put 14oz glove for heavy bag work. First heavy bag round was light contact, 4-6 hits, nothing hard – just warming up. Second round were 1-2 very hard strikes with a nice reset and pause in between. Third round I have tried to throw hard punches in combinations and just move around like in a real sparring (at least as my shape allowed me).

Here is the picture of Player Load and HR for different rounds for LEFT arm. 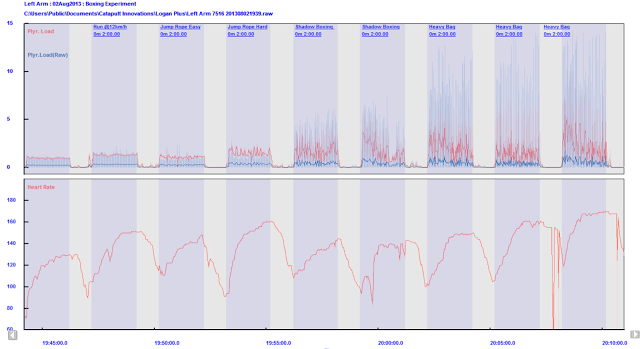 On this one you can see one heavy bag period in higher zoom: 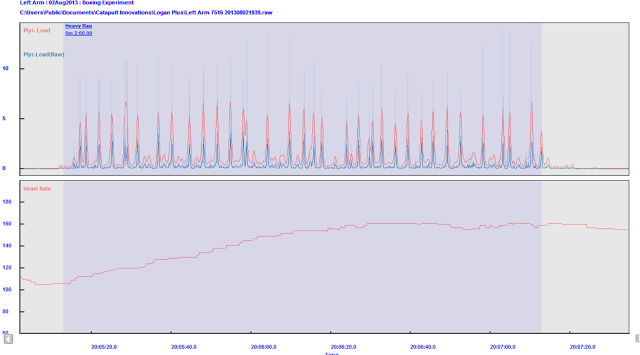 As you have guessed correctly each spike is a hit to the heavy bag. 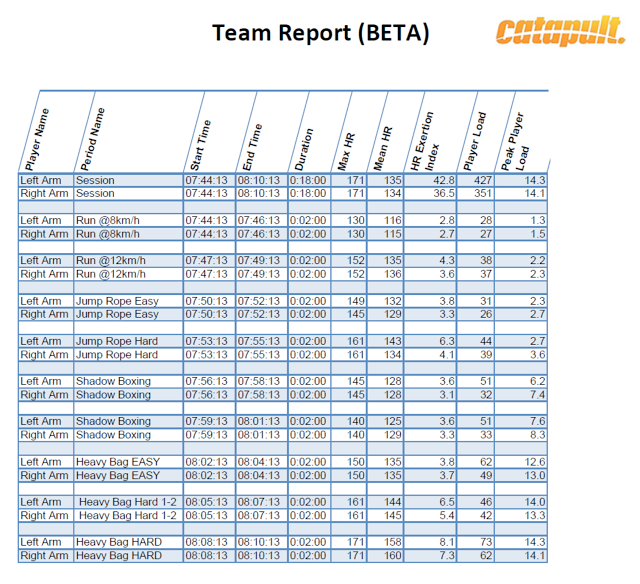 This is also an example of CRT (Customized Team Report) provided by Sprint software. I have used this Excel to graph some data further.

I have summarized load for LEFT and RIGHT to get TOTAL and I did some simple descriptive statistics.

On the following picture you can see relationship between Mean HR and Player load for different rounds. Please make sure that correlation might be wrong because I have put running and jump rope as rounds and that might affect the relationship. 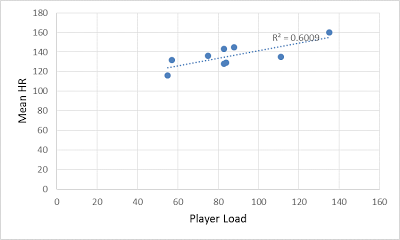 Same as in the picture above there is relationship (but lower) between Player Load and HR Exertion Index (something like TRIMP score). Again each dot represent one 2min round. 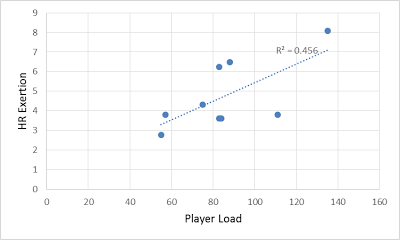 On the following pictures we can see different rounds and the HRmax, Mean HR and Player Load

There are couple of interesting insights. For Player Load, Jump Ropes get a bit lower position compared to HR mainly because the arms are almost stationary to the side of the body. Same thing for Running at 12 km/h. Again Player Load in this example represent the movement of the hands.

Compare to HR data, Heavy Bag 1-2 (hard punches in 1-2 with longer reset and rest in between) get lower score in Player Load for couple of reasons: the short re-set time decrease the score, or because of dwell time and filters hard hits are not taken into account. As all the researchers admit – we need more data. 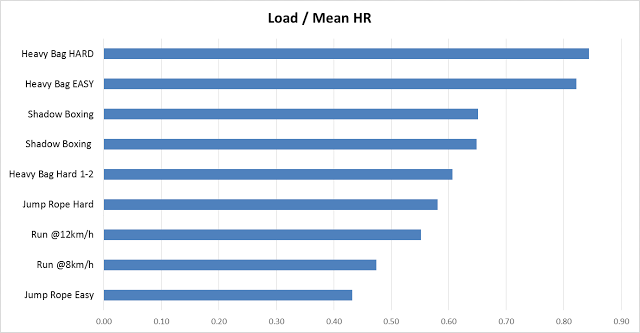 The idea for this type of analysis comes from cycling world (see blog entry by Joe Friel on this). By dividing Player Load with Mean HR we get some idea of efficiency and cost (short term; between activities comparison) or how the athletes are adapting/improving (long term, time series; within activity comparison).

Since the accelerometers are on hands, the activities that create lot more arm movement per internal load (penalty; mean HR) get better score.  We can use this between activities comparison to give us some insights into the differences in external work and internal penalty for that work. We might be able to compare individuals and see who might be more efficient (if mean HR are expressed at %HRmax) as a boxer (if we compare sparring or heavy bag data).

In the case we keep tracking extrenal/internal data for one activity, we could see how the athlete is adapting (as Joe Friel did) and when is he starting to plateau (or start showing some possible drop due overtraining or detraining). This might aid in the design of the training block. Again more research is needed.

I hope that this article gave Boxing, MMA, Karate, KickBox, Tae-Kwon Do coaches and researchers some ideas that they might try expanding upon, start using or start experimenting.