The intent of this presentation is to take the viewer through a step by step process regarding the design and implementation for training the advanced level hockey player. As Karl Popper states: “science starts and ends with problems.”

This presentation champions the importance of micro-panning, building an efficient filter for error elimination, and the use of heuristics in designing programs for high level hockey players. 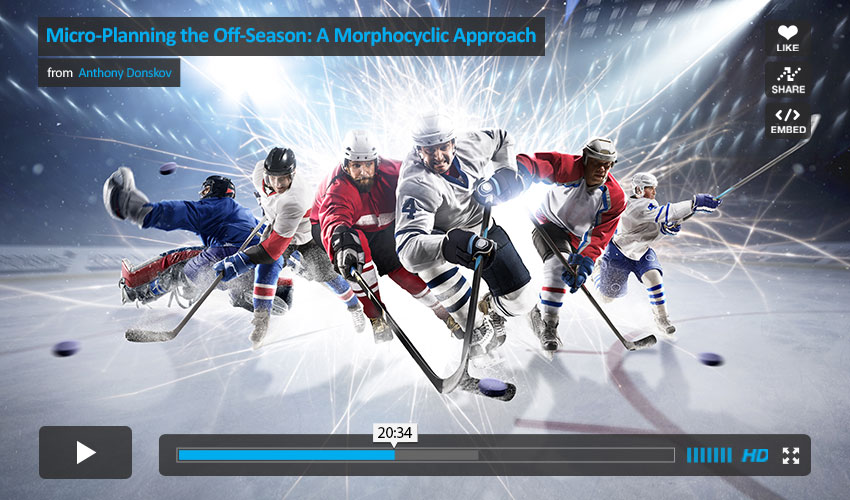 Anthony Donskov is the founder of Donskov Strength and Conditioning, Inc. (www.donskovsc.com) located in Columbus, Ohio where he serves as the Director of Sports Performance.  He currently oversees all facets of physical preparation including assessment, program design, testing, and continuing education.  Donskov earned a Masters Degree in Exercise Science from Cal U of PA and his BSc at Miami (OH) University.  He is currently perusing a Ph.D. in Kinesiology at the University of Western, Ontario, Canada.  Anthony served as an assistant strength coach or the USA Women’s National Ice Hockey Team (2010-2014) and has participated as a guest coach for several National Hockey League development camps.  In 2016, Donskov published a book titled: “Physical Preparation for Ice Hockey:  Biological Principles and Practical Solutions.”

Donskov is a head instructor/director of off-ice training at Donskov Hockey Development.  DHD (www.donskovhockey.com) is a family-run hockey school with a renowned reputation for developing youth athletes.  Anthony played two years of minor professional hockey (2001-2003) for the Lubbock Cotton Kings of the Central Hockey League.  He was named the 2003 Central Hockey League’s “Man of the Year” for his leadership on the ice and in the community.  Donskov played his collegiate hockey at Miami (OH) University (1997-2001) where he served as an assistant captain his senior year.  Anthony is certified through the National Strength and Conditioning Association (CSCS) and the National Academy of Sports Medicine (PES).  He resides in Columbus, Ohio with his dog Cossack.