Optimal Force-Velocity Profile for Sprinting: Is It All Bollocks? – Part 2

Optimal Force-Velocity Profile for Sprinting: Is It All Bollocks? – Part 2

In the previous part I have introduced two models to map out velocity-time relationship in the short sprints. These models “simplify” the more complex (assumed) COM velocity trace when using the radar/laser gun, by providing “step-average” velocity. In this part I will focus on the characteristics of the mono-exponential model (Furusawa, Hill, and Parkinson 1927; Clark et al. 2017; P. Samozino et al. 2016a; Jovanović and Vescovi 2022).

As demonstrated in the previous part, the mono-exponential model better fits to our theoretical understanding and constraints of the short sprints, and also provides intuitive parameters to understand. In addition to this, mono-exponential model is mathematically “elegant”, and it can be integrated and differentiated to provide solution for modeling different types of short sprint data.

For example, radar/laser gun provides velocity time series. As such, one can use Equation 1 as model definition. Here the MSS represents the maximum sprinting speed and TAU represents relative acceleration. Mathematically, TAU represents the ratio of MSS to initial acceleration (MAC; maximal acceleration) (Equation 2). TAU can also be interpreted as the time required to reach a sprinting velocity equal to 63% of MSS. I personally favor the use of MSS and MAC, particularly since TAU seems to be around value of 1 s across various sports and athlete levels (Clark and Ryan 2022). This led some researchers to conclude that the acceleration and velocity performance limits are related and proportional (Clark and Ryan 2022). This is a topic for another article, but it is a direct counter-point to the concept of optimal FVP. I will come back to this later in this article series.

If we differentiate Equation 1, we will get equation for acceleration (Equation 3). Elegantly, once we have estimated MSS and TAU parameters, mono-exponential equation allows us to predict kinematic and kinetic variables with ease.

Although radar/laser gun is considered the gold standard for estimating sprint profile (and also gives us the raw velocity trace that can be even more insightful than simple profile – see part one of this article series), we do not always have access to such technologies. More common alternative is using timing gates. With timing gates we do not get such a rich data set as with radar/laser gun, but we can still estimate MSS and TAU parameters. Integrating Equation 1 we get Equation 4, which we can use as model definition for the timing gates data.

Although one can use Equation 4, preferable model definition is Equation 5, since with timing gates, distance is predictor and the time is the outcome. It thus makes more statistical sense to model it as such.

If you are interested in how MSS and TAU are estimated using non-linear regression implemented in the {shorts} package, I suggest checking Jovanović and Vescovi (2022) and Jovanović (2022).

All in all, mono-exponential model is mathematically very simple and elegant and aligned with our theoretical model of short sprints: (1) sprint starts at $ t=0 $s, and (2) velocity reaches maximum without deceleration. There are few caveats with this, but it is beyond the scope of this article series (and it is the scope of my PhD thesis; you can read more about it in Jovanović and Vescovi (2022) and Jovanovic (2022)).

Once we have estimated MSS and TAU, be it from radar/laser gun velocity-time series, or from timing dates time-distance series, we can do all sort of wonderful things, like estimating kinematic and kinetic characteristics (again, step averaged – see previous part).

In the following examples we will assume mono-exponential model to be generative model (or data generating process; DGP). We will assume true MSS and TAU parameters, and use those to generate the data. We also do this when we estimate MSS and TAU from observed performance, but in that case we have additional noise, like time rounding, measurement error, performance variability, and so forth.

For the sake of exploration, we will utilize two athletes: Athlete A and Athlete B, for which we know the true values of MSS and TAU (Table 1).

Please note that the athletes in Table 1 have the same peak net relative power ($ P_{max} $, in W/kg), calculated using Equation 6. 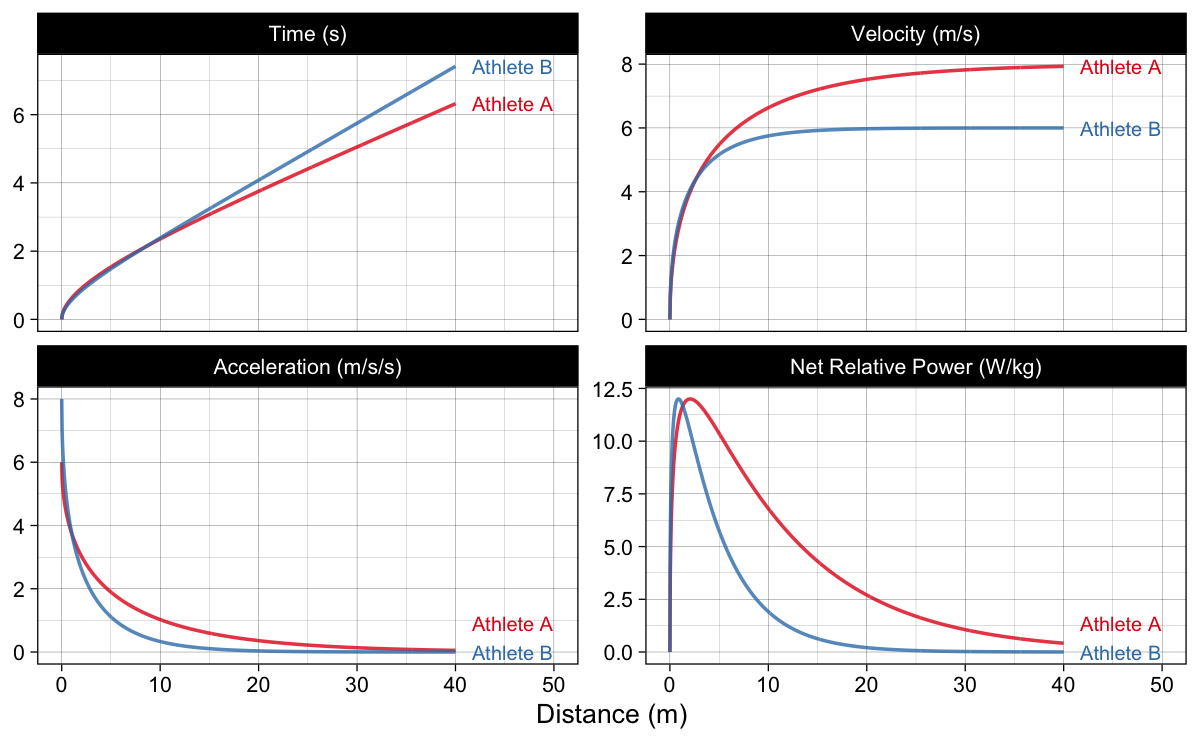 Figure 1: Kinematics using two hypothetical athletes. Please note that their Peak Net Relative Power (PMAX) is the same. One athlete is better “accelerator”, and the other has higher maximum sprinting speed. 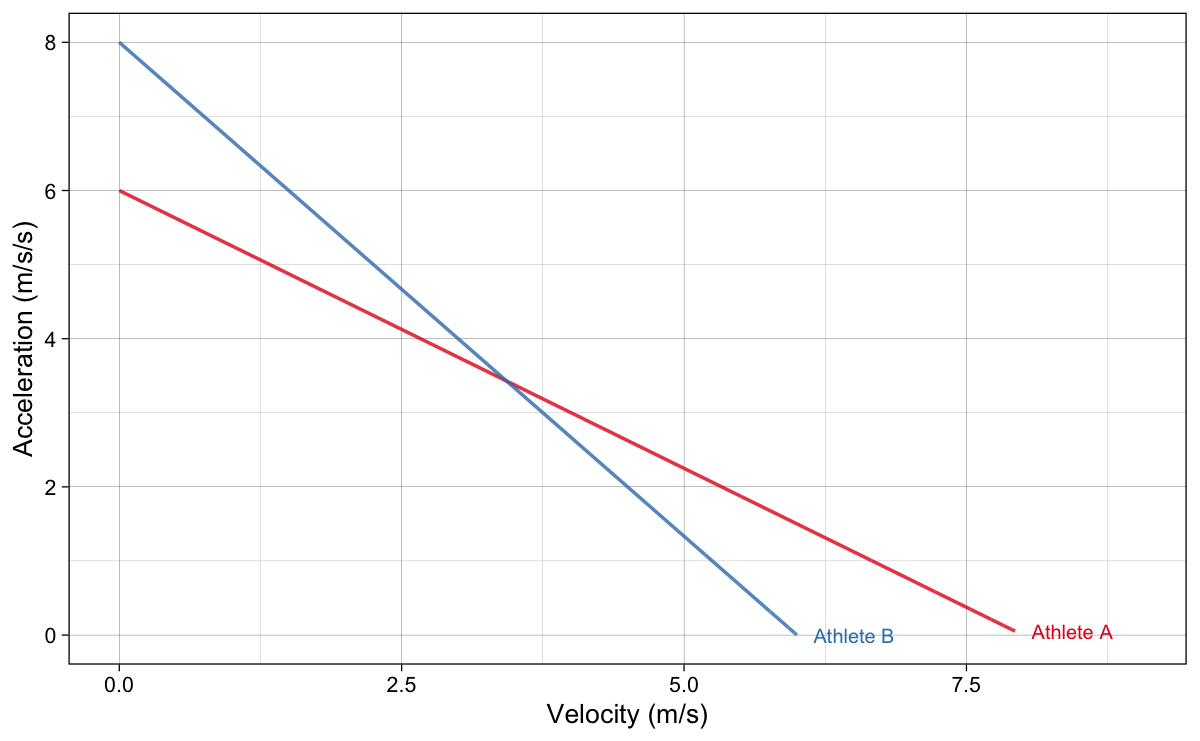 Please note that MSS is equal to the velocity value where the AVP crosses the x-axis, while MAC is equal to the acceleration value where the AVP crosses the y-axis. Slope of the curve can be expressed as Equation 7. It is interesting to note that the slope is also equal to negative TAU (Equation 8). Slope is interpreted as the decrease in acceleration (in $ ms^{-2} $) for every 1 $ ms^{-1} $ increase in velocity.

To explore kinetics and Force-Velocity Profile (FVP), we will use two different athletes: Athlete C and Athlete D, which have the same sprint characteristics, but different body weight and body height (Table 2)
This can be done across time or across distance, which can be more intuitive. Before we dig into the topic of optimal FVP, let us explore this further.

Welcome to Complementary Training Community! › Forums › Optimal Force-Velocity Profile for Sprinting: Is it all bollocks? – Part 2

This topic contains 1 reply, has 2 voices, and was last updated by