1RM stands for “1 repetition maximum”, or the highest weight that can be lifted under technical constraints of an exercise. For example, your 1RM in the parallel back squat is 150kg. If you try to lift more, you either fail, or you modify the technical execution (i.e. not going as deep, bouncing, etc). This is why the maximums need to be defined under technical constraints of a given exercise (tempo, depth and so forth). In other words, 1RM is maximal weight that one can lift without technical failure.

Having established exercise 1RMs is of the utmost importance for programming and performing percent-based programs. Pretty much everything revolves around this performance metric. The overall process of the “traditional” strength training (percent based) revolves around the following phases:

In this chapter I am going to cover phase 1: “Test or establish 1RM”. The other two phases will be covered in the next chapters.

Before dwelling about methods to establish 1RM, I need to remind you about Three Training Maximums Model, which are very related to the concept of 1RM. 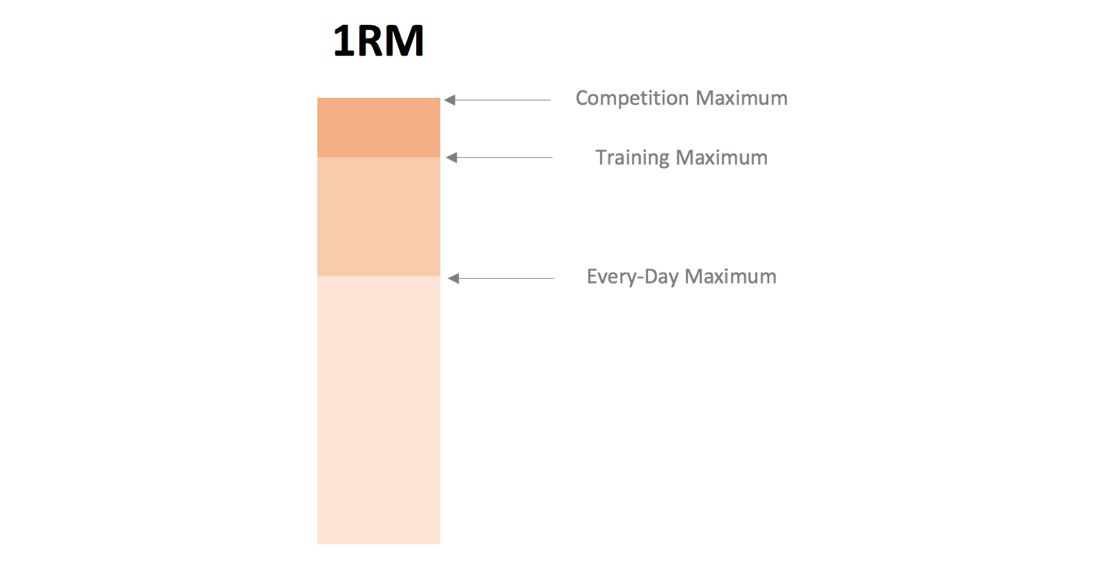 Competition Maximum (CM) is a level of performance achieved under a major arousal of the competition. For some athletes this arousal might be too much, so the CM can be lower than Training Maximum. But generally, CM is the highest level of performance, in this case 1RM.

Training Maximum (TM) is a level of performance that can be achieved in training conditions. It still needs some arousal, but not as much as in competition. This is the level of performance when you put your favorite death metal track, ask for assistance and cheering from your lifting partners, ask for hot chicks to watch and slap yourself few times. It is “balls to wall” as it can be achieved in training conditions.

Every Day Maximum (EDM) is a level of performance that you can achieve without any major arousal, music or hot girls in the gym. Something you can lift by just walking to the gym, and listening to Mozzart. Hence the name “every day maximum”.

It can be argued that there might be more “maximums”, but three components of this model are enough to get the message across, and that message is that there are multiple 1RMs. The question is – which one we are measuring and which one should we use to program the training?

According to the Push-Pull Model, most of the training time should be spent in “pulling” the EDM (i.e. raise the floor) versus “pushing” the Competition/Training maximum (i.e. “push the ceiling”). Having said this, I believe that EDM should be used to program the strength training. The question that naturally follows, is that if EDM is used to program the training, how should we approach testing or estimating EDM? Few authors (such as Jim Wendler) suggest using 80-90% of your Training Maximum (or “reported” maximum) to base your training cycle. This is very useful rule of thumb (heuristic), since most of the reported training maximums are over-bloated. Hence, it is better to be safe than sorry, and base your trying cycle using conservative 1RM (in this case 80-90% of TM, which is pretty much similar if not equal to EDM).

If you plan performing 1RM testing you want to use to prescribe training, I suggest your testing should be performed in a “calm” environment without pounding your chest like a gorilla. Otherwise, you better deduct 10-20% just to be safe. As will be explained soon, there might not be the need to re-test 1RM, but rather use fixed increments in weight. But more on that later on.

One of the main characteristics of Agile Periodization is avoidance of segregation between testing and training, and the effort to embed testing into training as much as possible. I will explain how to estimate 1RM from training, without actually testing it in the next few pages.

To summarize the things said so far: there are three 1RMs: Competition Maximum, Training Maximum and Every Day Maximum. The objective of the training is to “pull” EDM up, rather than “push” CM/TM up and try to “force” the progression and adaptation. Use your EDM to prescribe training and try to estimate EDM rather than TM. In the case you are not sure what is your EDM, deduct 10-20% from your TM.

Having covered the important distinctions in 1RMs, there are multiple ways to establish it:

True 1RM test is about “finding” the weight you can successfully list for 1 repetition, and it represents “gold standard” in estimating the “strength levels” in non-laboratory environment (and we are not interested in those environments anyway). 1RM testing is reliable and safe method, although not very time-efficient, especially if done for multiple exercises.

There are numerous protocols for 1RM testing, and the goal is to find your 1RM without causing too much fatigue with too many sets. The simple protocol might be the following:

As explained above, the key is to find 1RM by increasing and decreasing weights of the single attempts, but not exceeding 5-7 total tries. If multiple 1RMs are performed (i.e. for back squat and bench press) then longer rest period is advised (e.g. 5-10min). Here is the hypothetical example of a 1RM test for the bench press:

The example above shows you the typical 1RM testing. We managed to find 1RM using 5 sets (excluding two warm-ups). Another constraint might be giving time limit (after warm-up sets) rather than limiting to 5-7 sets. For example, “Lads, you have 20 minutes to find your 1RM. Timer starts…. NOW!”. And accept the highest technically sound rep as 1RM. It is up to athletes to select weight and rest periods. This approach might work better with athletes already familiar with 1RMs, but not so with beginners (or soccer players) who need more constraints and guidance in 1RM testing.

The key is not finding the perfect protocol, but rather sticking to the same protocol over time.

Another method to assess 1RM is using reps to failure technique. Rather than trying to find 1RM, we want to find 2-5RM (maximum weight that can be lifted for 2-5 reps ideally) and then use either conversion table or formulas to establish 1RM.

The protocol is much more simpler and quicker than 1RM.

For example, athlete performed maximum 5 reps with 150kg in the back squat. There are numerous formulas to establish 1RM from weight used and max number of reps and the simplest one is by Epley, popularized by Jim Wendler in his 5/3/1 books and articles. So here it is:

So if we plug in the 150kg and 5 reps that our athlete achieved, we get:

So according to Epley formula, 1RM of our athlete will be around 175kg. Another option would be to use re-conversion table, also based on Epley formula.

Using the example above, we find reconversion factor at 5 reps, which is 1.167 and we multiply that with 140kg used, which yields:

Using 1RM = (Weight x Reps x 0.0333) + Weight is easier than memorizing the whole table. We will return to this table when discussing phase two, especially when discussing exhaustion level expressed as reps in reserve (RIR).

During the last prescribed set (denoted as a PLUS set), athlete is trying to perform as much reps as possible. Usually these should be capped at around 10 reps. Using this “embedded” testing, one can estimate 1RMs (or changes in the same) during the workout. More on this when we cover phase 3.

One can also create individualized rep max tables, but that is feasible only when working with individual strength athletes, rather than team sport players. It comes to “satisficing” idea – something that is not perfect, but very usable, or good enough.

Using velocity to estimate 1RM has been a novel technique that still needs validation. To perform this method, one needs LPT (linear position transducer) such as GymAware. The LPT device connects to a barbell via retractable cable and measures velocity of movements. If we plot velocity of the reps versus load we get straight line that we can use to estimate 1RM.

There is one thing that needs to be known and it tends to differ between exercises more than between individuals: v1RM, or velocity at 1RM. For bench press v1RM is around 0.15m/s and for the back squat v1RM is around 0.3m/s. Once you know these velocities for an individual (and you can measure them when performing true 1RM test), one can estimate 1RM from submax lifts (assuming they are all performed with maximal concentric velocity) using simple linear regression.

The reliability of this method is still being researched and it is also a topic of my PhD. Estimating 1RM using Load-Velocity profile is only one potential use of Velocity Based Training (VBT) (you can read more about it in 1). The novel use of VBT is using velocity to prescribe training, rather than using %1RM and number of reps. For example, one might prescribe finding and lifting a weight with initial velocity of 0.5m/s and stopping the set once velocity reaches 0.4m/s. This could be very useful when performing main exercises (e.g. squat, bench press, deadlift) with individual strength athletes, but not very useful for team sport athletes.

Another interesting use, as mentioned above, it to use warm-up sets as “embedded” testing to estimate daily 1RM. All of this, of course, assumes maximal concentric velocity during reps. Due changes in exercise technique (i.e. depth, bounce, pause) during sets, the estimates might be completely off – so this method of 1RM estimation should be reserved only for experienced lifters with “stable” technique and for exercises that have well constrained start and stop position. Those include, but are not limited to: deadlift, hex bar squat, bench press, bench pull, box squat.

The forth method advise against direct testing 1RM and represents embedded way of estimating it using iterations (which is aligned with Agile Periodization). Why do we need 1RM in the first place? As explained in the beginning of this chapter, we need 1RM to prescribe workloads using “traditional” percent based program. But there are other, alternative methods:

This topic contains 2 replies, has 2 voices, and was last updated by