I am continuing the previous part where I discussed the analogy of the “puzzles”. In this piece I will cover two concepts that needs to be taken into account when planning: strengths~weaknesses and individual~collective complementary pairs. I also cover “probabilistic planning” model and the idea and use of heuristics.

The concept of strength and weaknesses is a bit abstract, but it can guide our decision making when planning out the micro-cycle. It is most frequently related to team tactics and game plan (strategy), but it can be applied to other training components/buckets (technical, physical, mental, etc) as well.

One can look at strength/weaknesses as trade-off, but they can be seen as separate entities (i.e. their sum is not always the same, or zero). Each mini-block have different emphasis in this strengths/weaknesses continuum. This can be seen as a simple diagram (quadrant). 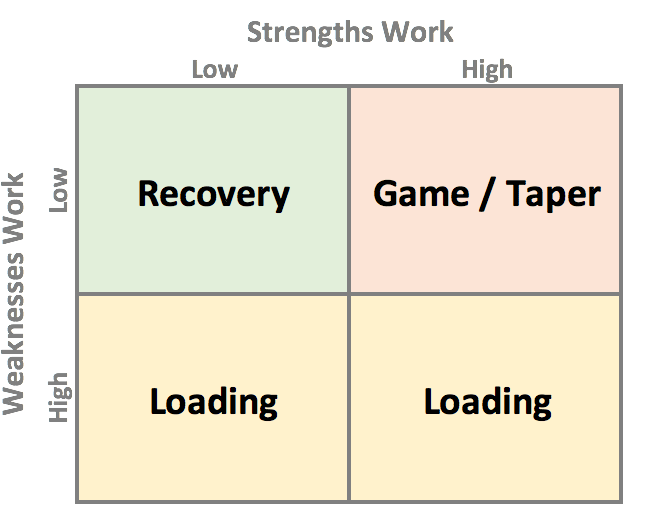 During the recovery mini-block the athletes are not very receptive for any type of work, so both work on strengths and weaknesses is low.

Taper mini-block and game are when we are working mostly on strengths and reducing the work on weaknesses since we want to build up the confidence in player and play on our strength. This is the time where we emphasis preparation for the upcoming game and minimize mistakes correction from the last game.

Loading mini-block is great time to work where we can really work hard on both strength and weaknesses: address the weaknesses from the previous match and try to correct them for the upcoming opponent.

When we put the “puzzles” in a simple week plan, we can get the following picture:

Figure 11. Strengths and Weaknesses work in a simple micro-cycle

Different game phases (e.g. defense, attack) might get different emphasis on strengths/weaknesses continuum/quadrant. For example, some coaches prefer to stick to their team “intrinsic” attaching game plan (i.e. work on strengths), and prepare the defense for the upcoming opponent (i.e. fix the defense weaknesses based on the upcoming opponent attacking play style). It is again important to emphasis that these are abstract concepts that can be applied on multiple levels and components differently, and thus represents only a model/”jig” that the coach can use to help his planning decision making.

The concept of strengths/weaknesses can be extend to longer time frames as well. For example, in early parts of the preparatory period we might emphasize work on the weaknesses of the team, and in the later parts we might spend more time working on strengths. This distinction is not as clear cut in reality – coach needs to “probe” the team (see Complex quadrant in Cynefin Framework 1) and learn about the team and individual players (especially if that is his first season with the new team). He/She also needs to deliver MVP (minimum viable performance) to friendly games and rise the confidence of the board and players. This is of course not possible if he/she works only on weaknesses of the team.

Hence, work on strengths and weaknesses is intertwined inside a given micro-cycle (i.e. shorter and more intense waves), but it can also show different tendencies over the longer time frame (i.e. longer and less intense waves).