Use Every Day Maximums (EDM)

It should be clear by now that for planning of the strength training cycle, we are using 1RMs as something that helps us with prescription, and not something to argue about until cows come home. It is a concept of “satisficing” that applies here – “something that is good enough to get the job done”. This is indeed philosophy of pragmatism.
Besides, we are using multiple 1RMs for assistance exercises, that are estimated from 1RMs of the main lifts. Hence, they are not very precise, but they are meaningful in prescribing the training.

What is important to remember, is that it is better to underestimate 1RM a lot, than overestimate 1RM a bit. It is better to be conservative and start light, since through iterations and short planning cycles and quick feedback, we are going to ‘converge’ to ‘true’ 1RM quickly. And by ‘true’, I refer to EDM (every day maximum).
It is my opinion that we need to use EDM in planning strength training cycle. So if we did training max estimate, some authors suggest stripping off 10-15% of it and using that as EDM, which is good heuristic. If we use ‘estimation through iteration’, then we are starting with conservative estimate anyway.

Push vs Pull concept is very important in understanding program design. But, before we dig into those, let’s assume we have three levels of 1RM, as well as three levels of training volume or stress. 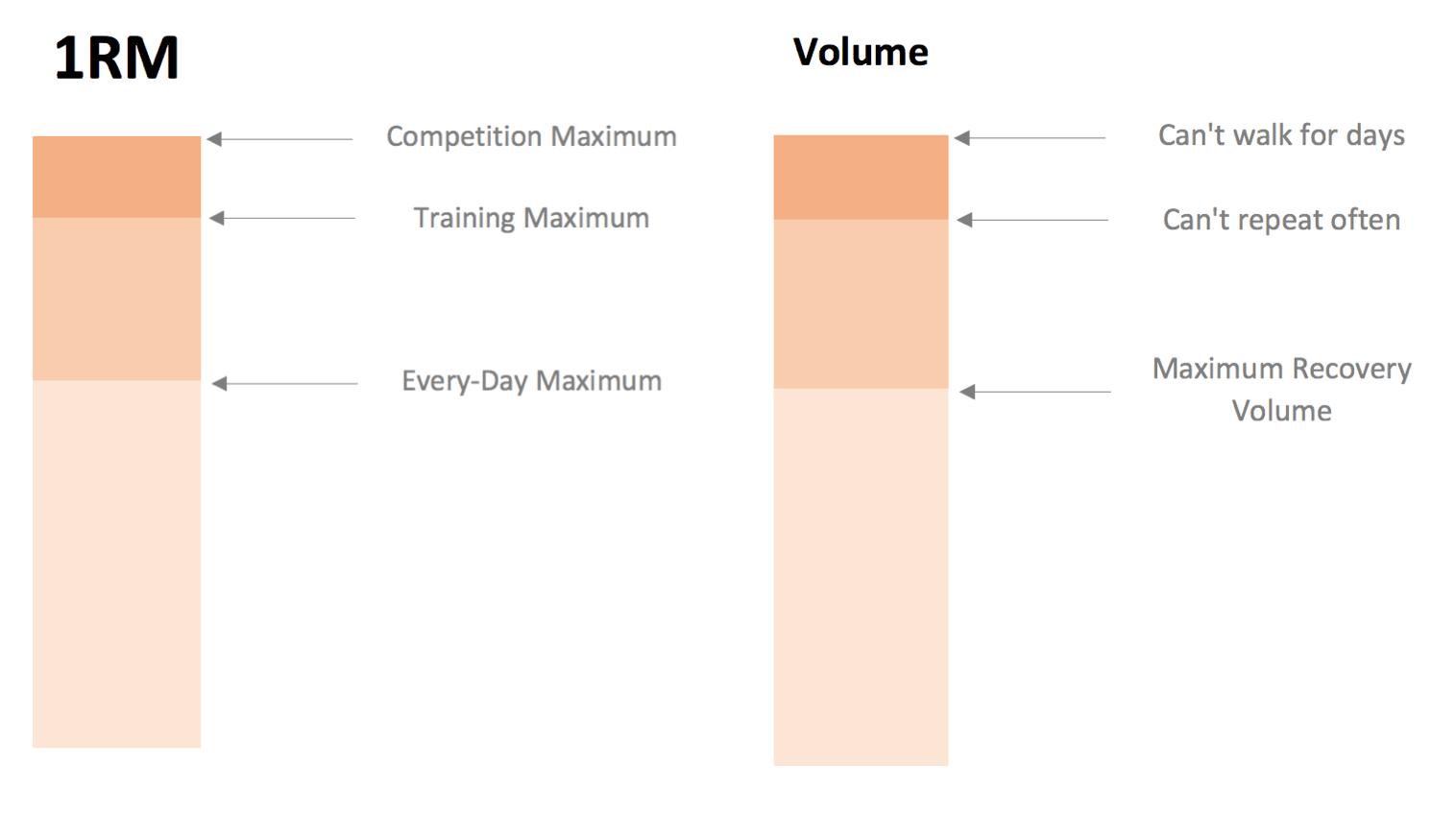 This is, of course, simplification, but it will get the message across. Let’s take 1RM changes across weeks (and here, we assume ‘predictability here’): 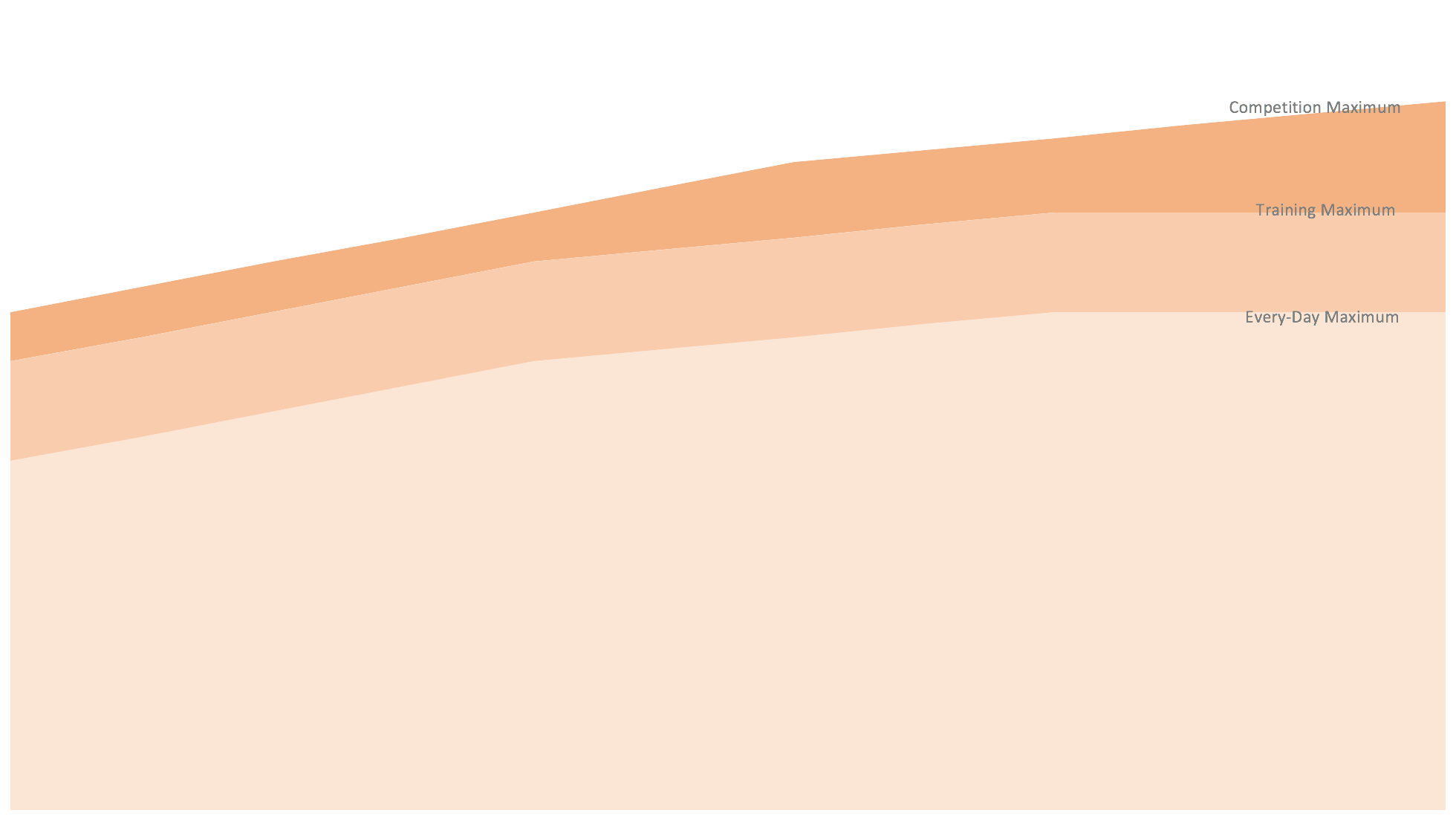 These represent adaptation curves – or, in other words, they depict absolute changes in 1RMs across weeks, as well as relative difference between Competition Maximum, Training Maximum and EDM.

What we can do next, is to depict progression in training on top of the above adaptation curves: 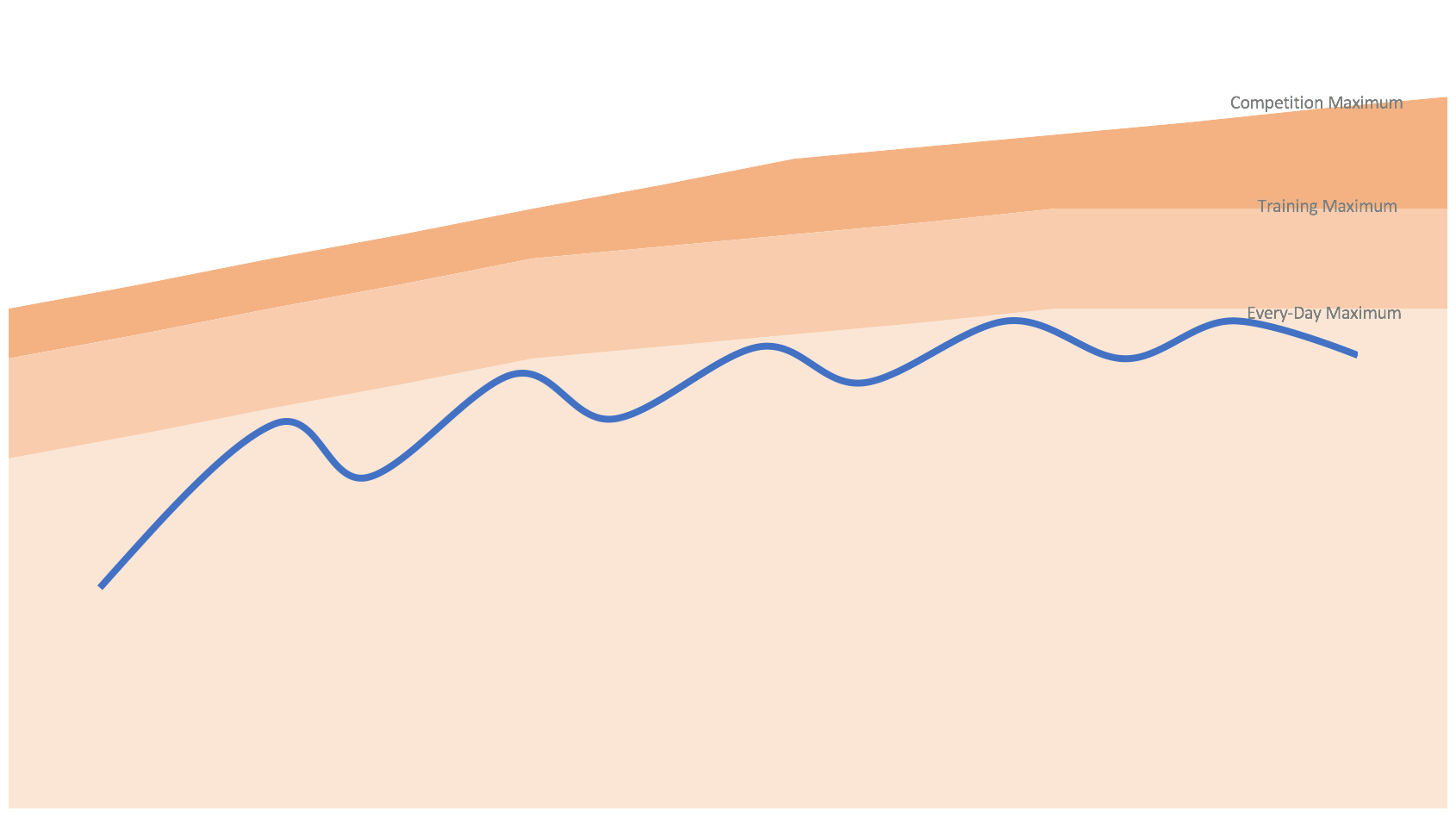 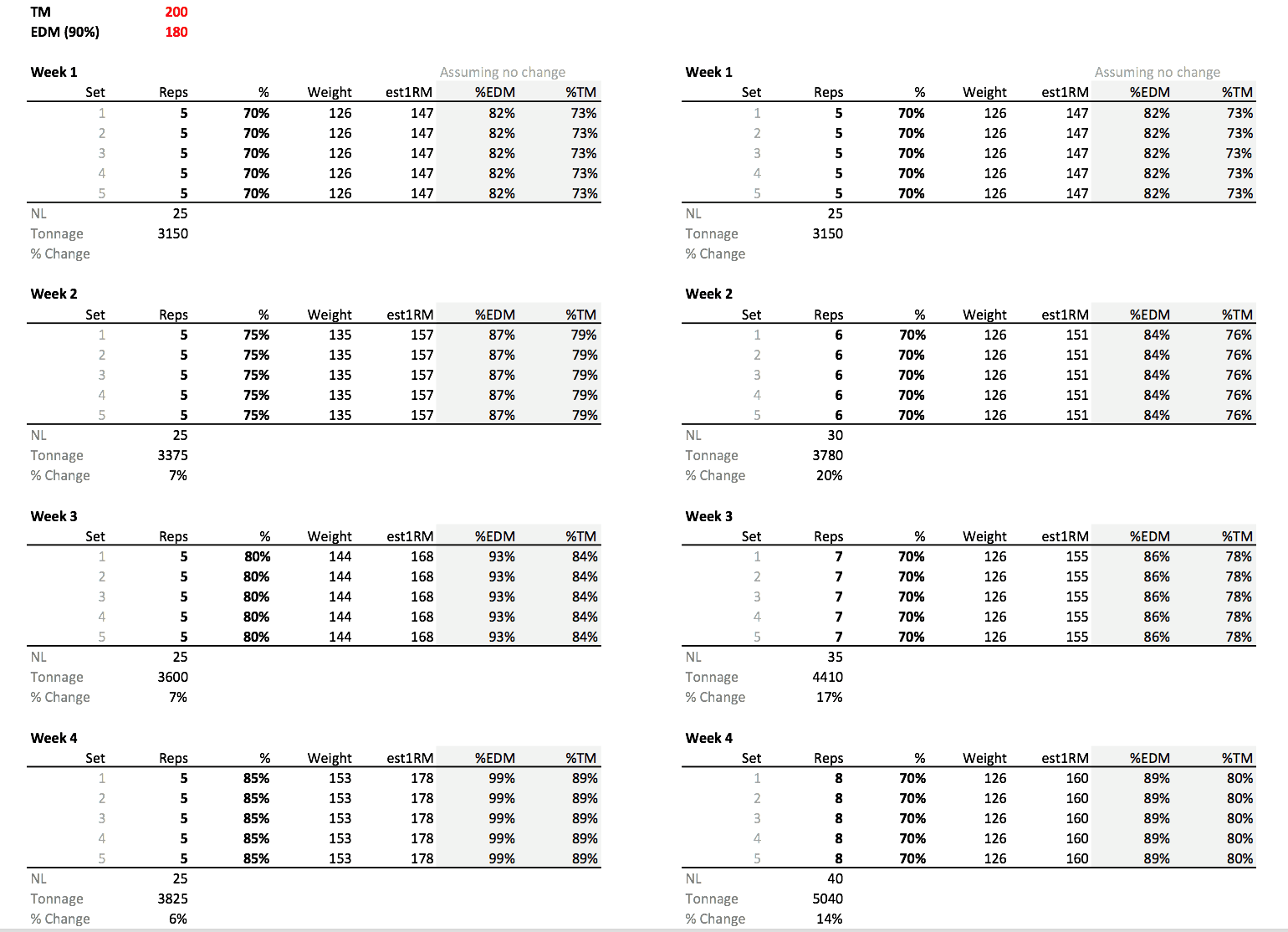 Figure 4. Estimating 1RM from training itself

The rest of the table follows this same analysis for the rest of the week and, as can be seen, only in the week 4 our estimated 1RM is approaching EDM. The analysis assumes that TM and EDM stay the same across the weeks, which, of course, is not true, but simplifies the analysis.

This analysis could be done by using the volume as well (e.g. using tonnage), but it is much harder to pinpoint to the levels in Figure 4, although the concept is the same.
Now imagine we use a program with much more ‘aggressive’ progression: 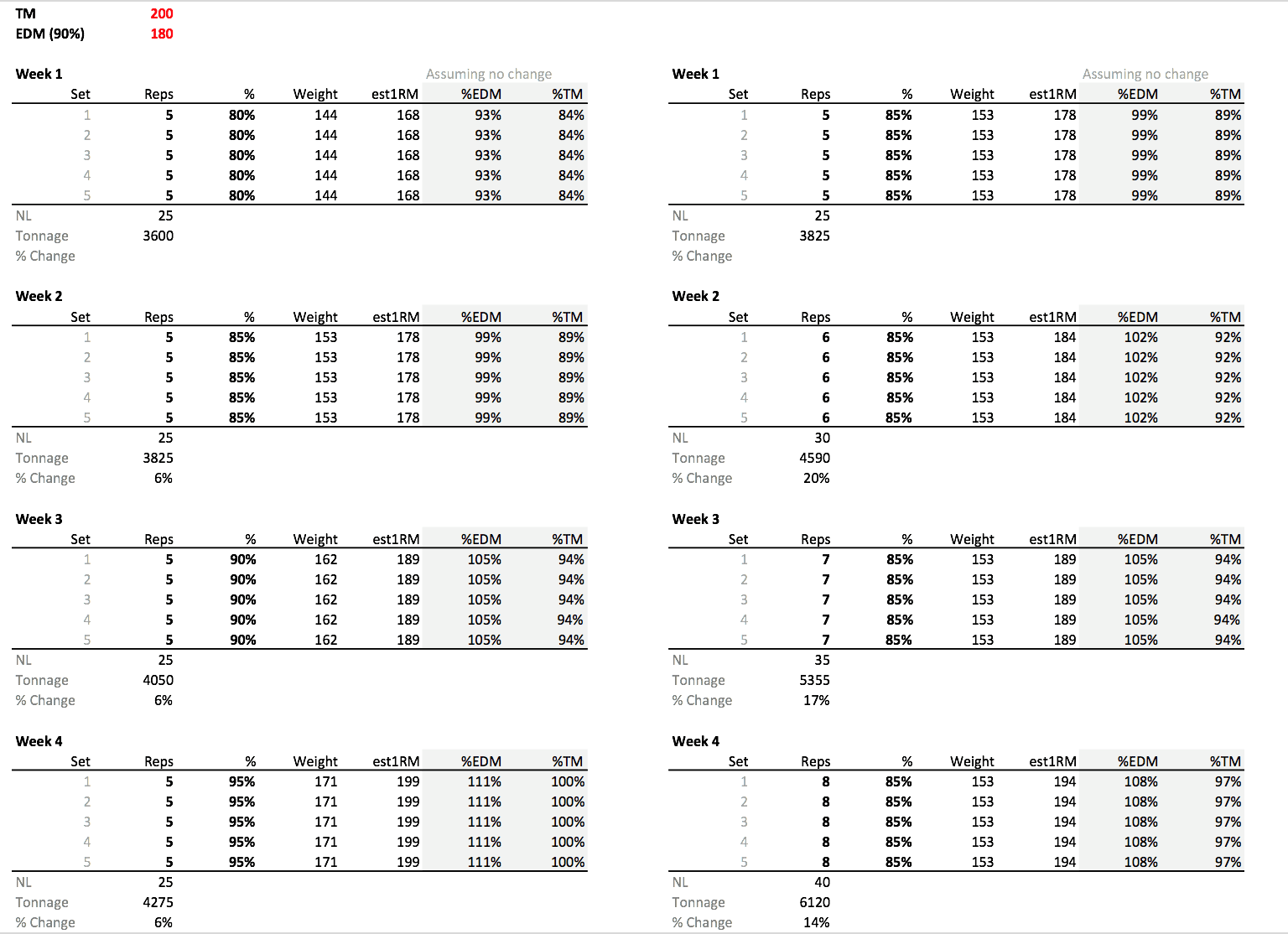 You can see that we are really trying to ‘push’ it, since our estimated 1RM in the week 3 and the week 4 is already higher than our EDM.
This concept can be applied to training volume as well, not only to estimated 1RM (which is only one hardest set). One can really push the tonnage with conservative % 1RM and achieve the similar scenario.

These two complementary pairs are not independent of each other. In the above examples, we assume TM and EDM stay the same across the weeks (or we assumed their change is known in advance, as in figure 5). But certain progressions might induce different rates of change (adaptation), and different rates of change (adaptation) might afford different progressions. Hence, the two are highly interdependent.

Progression and adaptation, as well as Push and Pull, are concepts that are universally true for any training component, not solely for strength training. But anyway, I believe introducing them here might be more understandable.

Both approaches have utility in strength training programming. Push approach in strength training programming assumes strict progressions that are usually very close to, or surpass EDM and Maximum Recovery Volume (a training volume that allows you to repeat it very often). For this reason, these types of programs are quite short and they all have ‘unloading ‘ phase after, to allow the athlete to recover. Some of these programs push the athlete into the state of over-reaching (if you visualize the adaptation curves, they will be going down in this case), after which athlete might super-compensates more than if more ‘conservative’ program is used. The major point here is that ‘push’ programs are short they have the unloading phase afterwards, and they cannot be repeated frequently.

The pull programs ‘slow cooks’ the athlete. They are very ‘repeatable’ and they adjust based on the rate of change, or start much more lightly and conservatively, that allows the big buffer and room for progression over time. The pull programs can also be ‘too easy’ and therefore might not provide enough of stimuli. For that reason, the pull programs need to achieve a ‘minimal effective dose’ (e.g. satisficing) which is enough to pull the adaptation up. The only problem is that we do not know which level is this and how it changes from day to day. So, the best we can do when facing this uncertainty, is use heuristics of “consistency beat loading”, as well as use shorter cycles with more frequent feedback to tell us if we are on the right track.

When it comes to relative changes between CM, TM and EDM, the push approach creates bigger gap between TM and EDM. Other words, athlete’s EDM might stay on the similar level and his CM/TM might rise up, creating the gap between the two. The EDM might even drop, so after the push cycle, EDM might be worse than when it started and needs to be rebuilt. This is good to be performed as a pre-comp cycle in strength-sports (where one wants to push the CM/TM up for the competition), but not very usable in team sports, where athletes are ‘strength generalists’ and not specialists. In the pull approach, we are slowly raising EDM, rather than trying to force the CM/TM. Anyway, both approaches are needed for certain scenarios in varying degrees. 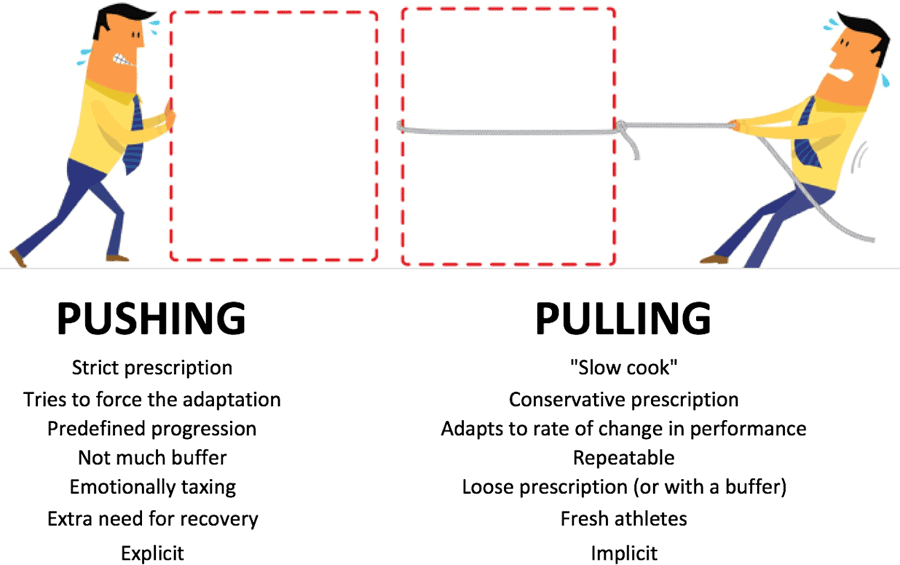 This concept might remind you of Dan John’s concept of two benches. Yes, it is exactly that:

It’s a simple concept. Like weights, benches have multiple uses. If you’re waiting to get to work sitting on a bus bench, you don’t just hope, you demand that the bus be on time. If it’s even a little late, it could ruin your day at work.

Park benches are built the exact same way, but when you sit in a park, you don’t expect or worry if Toby the squirrel comes by or not. You sit back and enjoy the process.

Bus bench workouts: You’re expecting results – on time! (Like you’re hoping the bus will be.)
Park bench workouts: Are an opportunity to explore and enjoy where you are in training.

I agree with Dan John that most of your workouts or training programs should be of Park Bench type, while once in a while, for short period of time, you perform Bus Bench training programs.

I believe that in team sport this difference is even bigger – most, if not all, of your strength programs should be pull programs. Occasionally, once the opportunity emerges, we can use push programs. This is usually when the athlete is out of play, or injured and we are given such situation that push programs could be used. Otherwise, at least when it comes to strength training for team sport athletes, we should ‘slowly cook’ them.

Another complementary pair that goes with Push and Pull, is develop vs express…

This topic contains 6 replies, has 3 voices, and was last updated by