In running-based team sports (e.g. soccer, handball, basketball, rugby), non-contact hamstring injuries remain one of the major reasons players spend time on the sideline. Losing players for multiple weeks due to the hamstring (or any other non-contact) injury, can cost clubs not only winning games and championship, but can also be a huge financial loss. Estimating likelihood of non-contact hamstring injuries and intervening with appropriate actions on those predictions is the “holy grail” of the applied sport science.

The aim of the current paper is twofold. First aim is to estimate predictive performance of multiple non-contact hamstring injury prediction models, by using a day-to-day collected training load data. Second aim is to follow up on the data preparation method outlined by the author in the previous paper,1 with predictive modelling on the real data set. Data set used in the current paper was given to the author, for the purpose of analysis by a sport organization that prefers to remain anonymous. Name of the athletes, days, training load metrics and any other data are made anonymous by the author. The author cannot claim validity of the data set used in the current paper, due to the fact that author has not been involved in the data collection, cleaning and storing of the data. Having said this, the results of the current paper should be viewed highly skeptically and with high level of concern. The purpose of the current paper is thus educational and speculative, with special emphasis on presenting a potential approach in predictive modelling of day-to-day training load data, with the aim of predicting non-contact hamstring injuries.

This study was conducted during the preparatory and competition periods of Season 1 and Season 2, in anonymous sports club for N=52 athletes, over 600 days in total (Season 1: N=45 for 307 days and Season 2: N=45 for 293 days, where N=38 athletes were present in both seasons) (see Figure 1).

Figure 1. Characteristics of Season 1 and Season 2 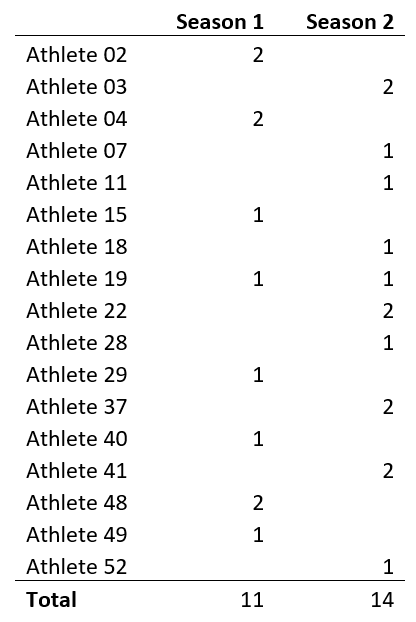 This study involved a day-to-day collection of training load and non-contact hamstring injury data (collected over Season 1 and Season 2 competition seasons including matches); (b) the modeling of training load with injury, with the aim of predicting occurrence of non-contact hamstring injury. In order to estimate the predictive performance of multiple classification machine learning models, a collected data was split into two partitions: (a) training data set and (b) testing data set 2. Training data set was used to train the models, while testing data set was used to estimate predictive performance on unseen data. Although I suggested splitting the data into training and testing data sets by using seasons 2 (e.g. Season 1 as training data set, and Season 2 as testing data set), due to the small number of injury occurrences, the data was split by using athletes instead. Data from both seasons for athletes “Athlete 02”, “Athlete 03”, “Athlete 40”, and “Athlete 52” was used as testing data set. Splitting the data by using this method, rather than seasons, has achieved multiple goals: (1) more injury occurrences are used to train the models, (2) potentially different loading patterns from two seasons are taken into account, and (3) models are evaluated on the unseen athletes, which represent ecologically valid way to evaluate the model.

For the purposes of this study, an injury was defined as any non-contact, soft-tissue hamstring injury sustained by an athlete, during a training session or match, that prevented the player from completing the entire training session or match. Other types and locations of injuries were collected over duration of this study, but were not taken into analysis and were assumed to have no effect on the likelihood of suffering non-contact hamstring injury. Since the author was not involved in injury data collection, the validity of the injury data used in the current study cannot be claimed.

Data collected was organized in day-athlete instances (one row of day data for each athlete), and the injury occurrence was tagged on a given day as “Injured” versus “Non.Injured” for all other days (see Table 2). 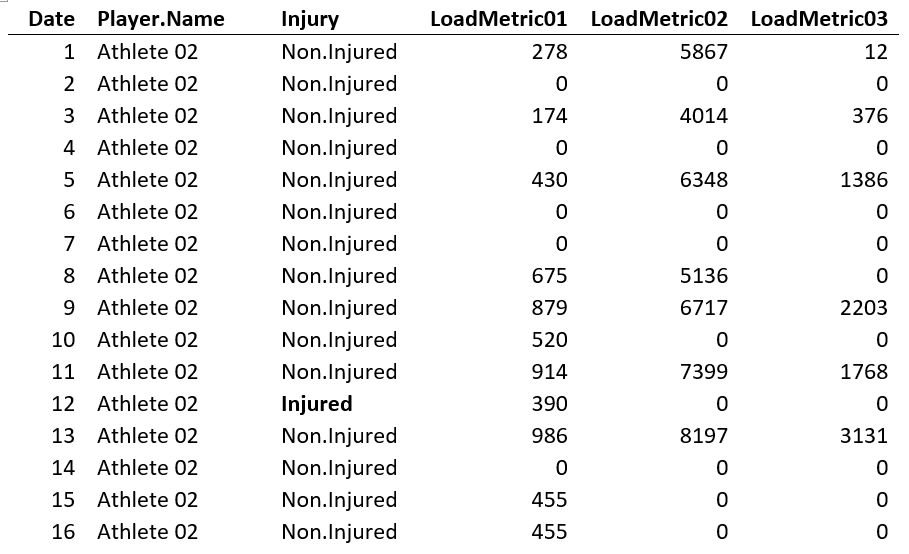 In order to be used in predictive model, new features have been engineered. Data preparation for injury prediction utilized in this study is outlined in the paper by the author, 1 with a few additions listed below. Every engineered feature was rounded to the closest two decimals.

Rolling Max and Rolling Mean
Two additional features have been calculated for Acute, Chronic, ACWR and ACWD features and they included last 7 days rolling maximum and rolling mean.
After the above explained feature engineering procedures, each daily training load metric (LoadMetric01, LoadMetric02 and LoadMetric03) has got an extra 12 engineered features, totaling in 36 features (where the original daily training load metrics were removed).

Lag Features
In order to help in modeling effects of training load preceding injury occurrence (i.e. creating a memory in the data set), an additional feature engineering has been applied and it involved creating the additional three lag variables for each of the previously engineered 36 features. This step involved creating 0, 7, 14 and 21 days lag variables, totaling in 144 engineered features (see Table 3). In theory, this helps in modelling delayed training load effect on injury likelihood (i.e. training load spike that occurred 2 weeks ago, might affect injury likelihood 2 weeks later). 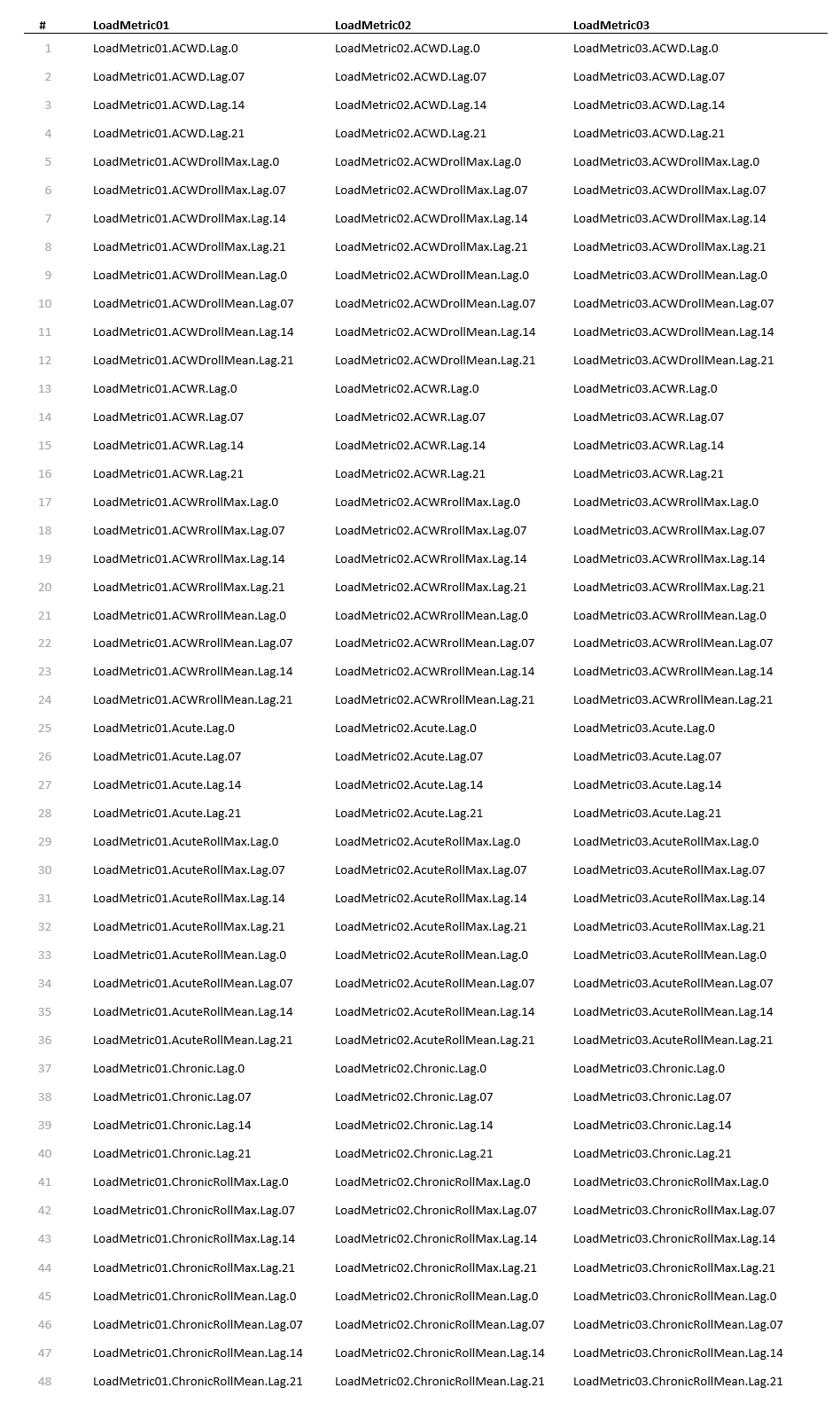 Injury Lead feature
Non-contact hamstring injury occurrence was tagged only once on the day when it occurred (see Table 2, Injury column). To create early warning sign, as well as to increase number of injury occurrences in the data set, and help predictive models by creating a potential overlap between the preceding training loads (using the above explained Lag features) and injury occurrence, the three target features have been created by using 7, 14 and 21 injury lead days (see Table 4). 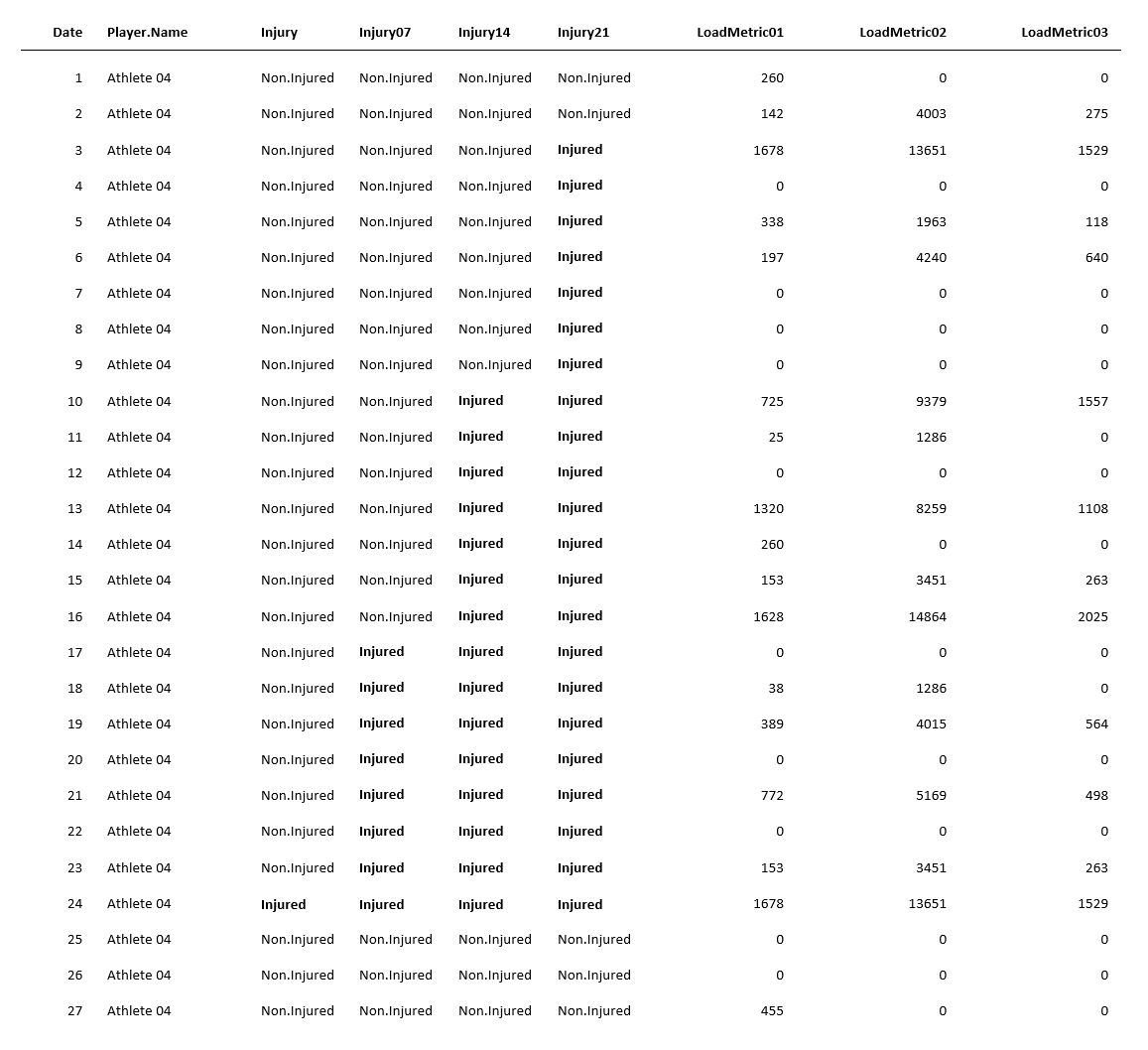 These three features (Injury07, Injury14 and Injury21) represent target variables in the predictive models. With the data organized this way, machine learning models estimate the likelihood of getting non-contact hamstring injury in 7 or less, 14 or less, and 21 or less days. Performance of each machine learning model will be reported for each injury target variable.

The most valid method to perform cross-validation would be using “leave-one-injured-athlete-out” (LOIAO) (see Figure 3). LOIAO cross-validation involves leaving one injured athlete (who suffered at least one injury in the training data set) and training the model on the rest of the data. AUC as a measure of predictive performance is calculated for the left-out athlete. The process is repeated for all injured athletes in the training data set, and the final model tuning parameter was selected based on the highest averaged cross-validated AUC metric.

Unfortunately, LOIAO cross-validation, although ecologically the most valid method to evaluate predictive performance for the problem at hand (since we are interested in how model predicts on new unseen athletes), was not utilized in the current paper. The main issue with LOIAO cross-validation is very small number of injury occurrences (since we are predicting on only one athlete) and, thus, unreliable estimation of AUC. For the purposes of the current paper, repeated cross-validation with 3 folds and 10 repeats was utilized.

Predicting “Injured” versus “Non.Injured” instances, represent classification problem in machine learning. For the purposes of this study, AUC metric was used to estimate predictive performance of the machine learning models 7 13. AUC is expressed in arbitrary units, where 1 is perfect prediction and 0.5 is equal to random guess. 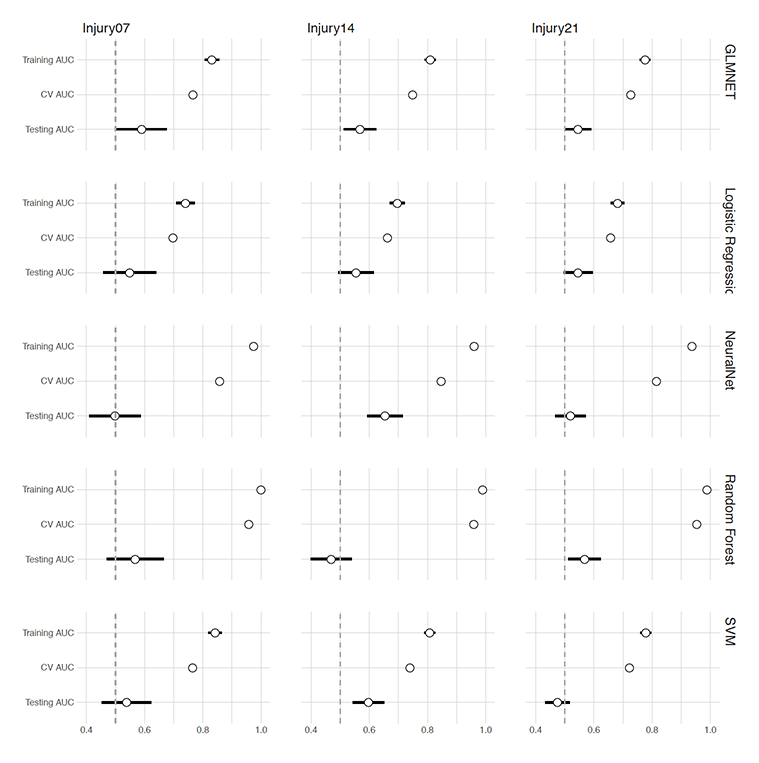 From all of the models, Random Forest had the perfect prediction on training data set for all three target variables (Injury07, Injury14, and Injury 21), but it suffered from overfit 7, as can be seen through the poor performance on testing data set. Overall, all models showed poor predictive performance on the testing data set (less than 0.65 AUC, where 0.5 AUC is a ran-dom guess, and 1 AUC is perfect prediction). All models, ROC, and predictions can be found in Supplementary Material.

Model performance on training data set can be optimistic and suffer from overfit, or, in other words, model can confuse noise for the signal 7. To control for making overfit errors, cross-validation and hold-out (testing) data set are utilized. Figure 5 depicts Random Forest predictions for Injury14 target variable on training data set. 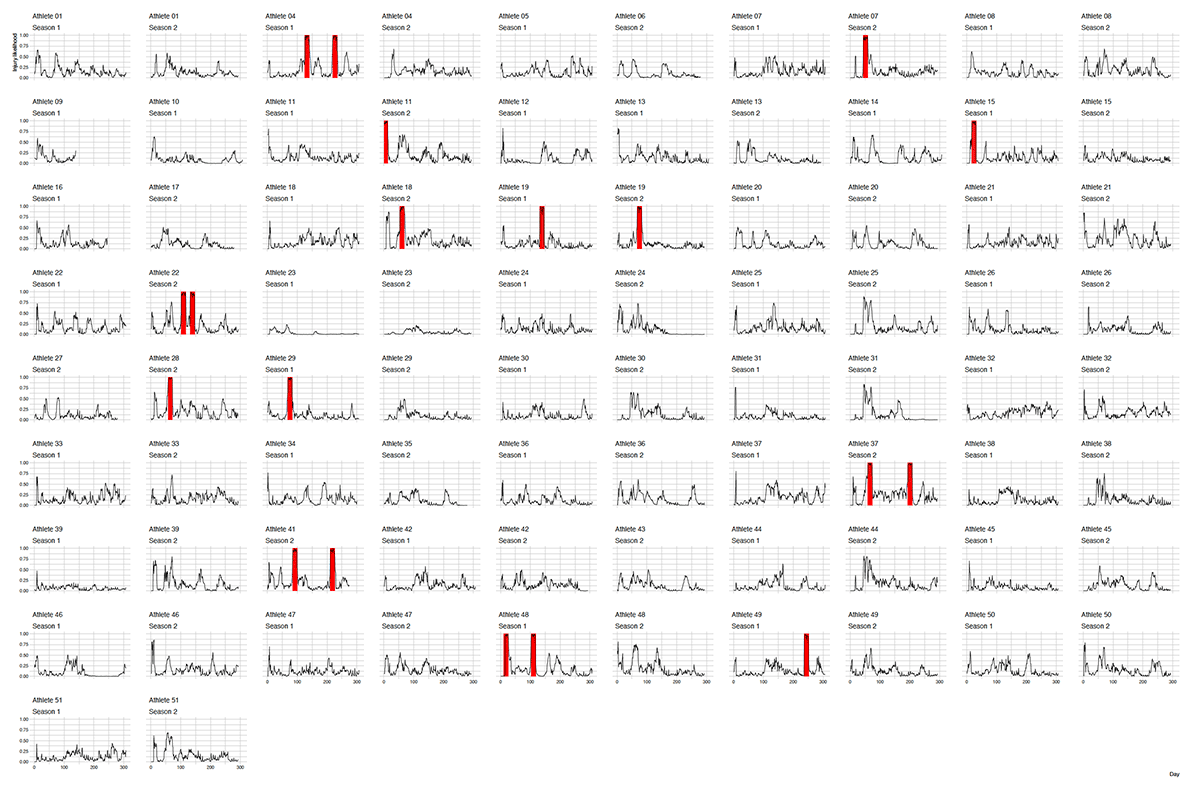 From simple visual inspection of the graph, it can be seen that prediction is perfect, because the model predicts very high likelihood of injuries in the red bars (red bars represent the actual injury occurrence, with 14 days injury lead). Figure 6 depicts ROC curve for the discussed training data set Random Forest model performance for Injury14 target variable. 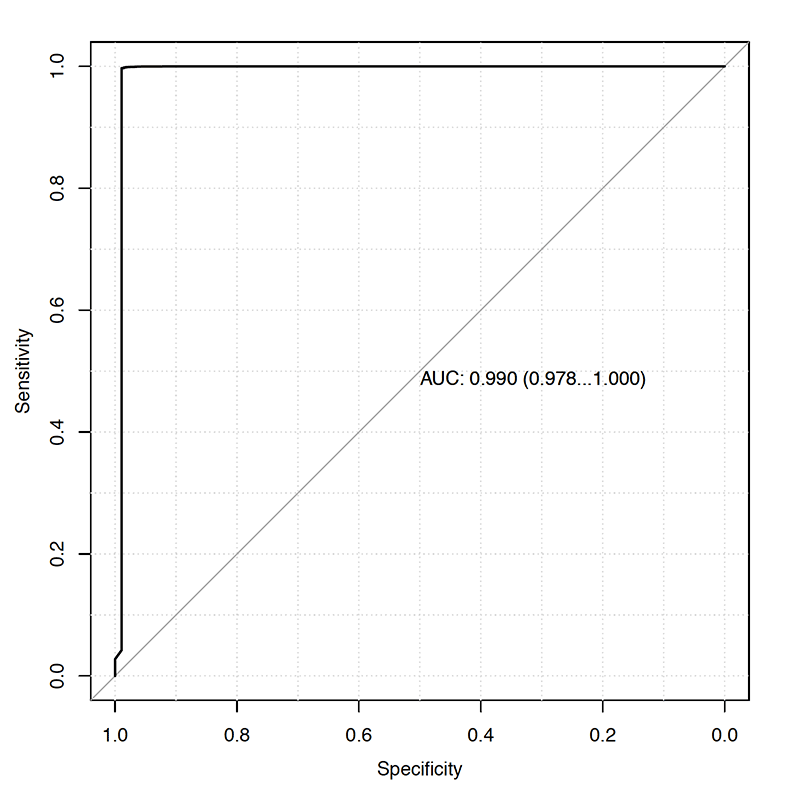 From Figure 5 and Figure 6, one can conclude that non-contact hamstring injuries can be perfectly predicted. But when this very same model is evaluated on testing data set (unseen by the model), the predictions (Figure 7) and ROC curve (Figure 8) look much different, ac-tually worse than a random guess (0.47 AUC). 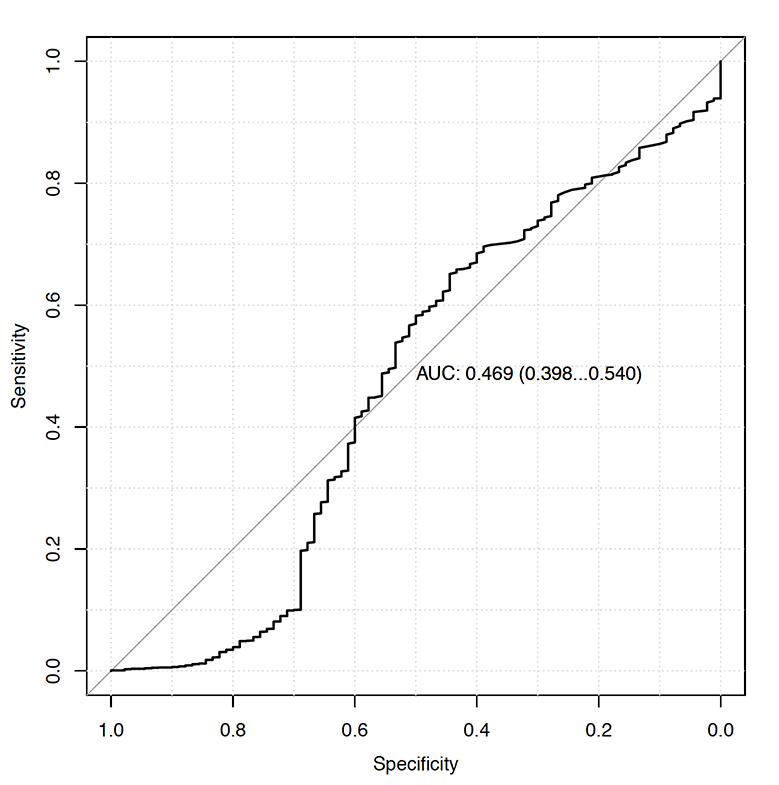 In the current study, by assuming validity of the data analyzed, it can be concluded that the non-contact hamstring injuries could not be predicted by using training load data with features engineered, as described previously. To paraphrase Nassim Taleb, author of Black Swan 14 and Antifragile 15 books: “It is far easier to figure out if something is fragile, then to predict the occurrence of an event that may harm it”. Practitioners should hence spend more time and effort in building more robust athletes, than trying to predict injury occurrences 2.

Enlisting all limitations and assumptions (known and unknown) can probably be a paper itself. Collecting more data for a longer period of time (i.e. the whole league for 5-10 years), might bring some insightful information and it could be a fruitful strategy to employ. In machine learning, there is a heuristic “More data beats better algorithms” 16. Even with such an enterprise, numerous modeling assumptions will be present, and practitioners should look at model predictions as only one source of information or evidence to direct their practices. Other sources of actionable insights should be simple rules of thumb or heuristics (such as those proposed by the author 2, coaching intuition, and using multi-model approach 17. Even if injury prediction models show more promising predictive performance in the future, they don’t sort out intervention and causal problems 2:

Predicting future events is hard, but what is even harder, is acting on these predictions. One potential solution is to look at model predictions as only one source of insights (e.g. “what training load history has to tell us?”) that needs to be put into the correct context (together with intuition and heuristics as other sources of actionable insights), acted upon it with a grain of salt, and frequently re-built with the latest data and intervention information. Together with Nassim Taleb quote, this current paper is best finished with the quote by Abraham Lincoln: “The best way to predict the future is to create it”.

Current paper and accompanying code are under MIT license

Permission is hereby granted, free of charge, to any person obtaining a copy of this software and associated documentation files (the “Software”), to deal in the Software without re-striction, including without limitation the rights to use, copy, modify, merge, publish, dis-tribute, sublicense, and/or sell copies of the Software, and to permit persons to whom the Software is furnished to do so, subject to the following conditions:

The above copyright notice and this permission notice shall be included in
all copies or substantial portions of the Software.

THE SOFTWARE IS PROVIDED “AS IS”, WITHOUT WARRANTY OF ANY KIND, EXPRESS OR IMPLIED, INCLUDING BUT NOT LIMITED TO THE WARRANTIES OF MERCHANTABILITY, FITNESS FOR A PARTICULAR PURPOSE AND NON-INFRINGEMENT.
IN NO EVENT SHALL THE AUTHORS OR COPYRIGHT HOLDERS BE LIABLE FOR ANY CLAIM, DAMAGES OR OTHER LIABILITY, WHETHER IN AN AC-TION OF CONTRACT, TORT OR OTHERWISE, ARISING FROM, OUT OF OR IN CONNECTION WITH THE SOFTWARE OR THE USE OR OTHER DEALINGS IN
THE SOFTWARE.

For citations please use the following:

This topic contains 7 replies, has 2 voices, and was last updated by