Problems of the Periodization of Training in Mixed Sports – Part 2

The point being taken by the preceding discussion (see Part 1) is that the mixed sports DOES NOT demand for EXTREME levels of strength/power and endurance.

From a physical preparation standpoint, the two main goals (if we exclude injury prevention) in mixed sports are:

For these reasons most mixed sports fall in the group of alactic-aerobic sports. Alactic-Anaerobic energy system (ATP/CP) is used to fuel short and powerful activity bursts, while the Aerobic system is used to replenish ATP/CP and to fuel lower intensity activity.

From time to time, there are instances where

During these periods, Anaerobic-Lactic (Glycolytic) Energy system is utilized to a greater degree, thus there is some need for developing this energy system too, especially because those situations can decide the winner or the loser. There is a lot of cross and longitudinal researches that tries to figure out the relationship between RSA, SE, Aerobic Power (VO2max, vVO2max), Aerobic Capacity (vLT), on filed performance (distance covered, distance covered at higher intensities, number of sprints) etc, but without concise answers.

Most if not all training wisdom comes from non-mixed sports (strength/power, endurance) or should I call them Traditional Olympic sports, like track and field, swimming, rowing, and cycling. In those sports competition calendar is well defined with couple of peaks (in terms of sport result) per year (1-3, but even more in modern strength/power sports). The duration of the preparatory period to competition period is in favor of preparatory period. 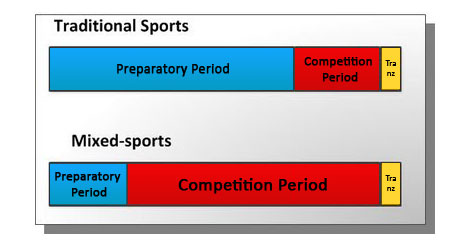 Contrary to this Traditional Model, in mixed-sports (team sports, sport games) the competition calendar is getting longer and longer with less and less time for preparatory period. The need of the competition period can demand highly prepared players ready to play-injury free at the high level of play for prolonged period of time. In most cases there is no need to peak except for play-offs and international competitions. The goal is meta-stable level of performance over the whole competition period, rather than large peaks and valleys which are normal when peaking (see Joel Friel’s 7 Basic Training Assumptions, especially #7). My head coach Marko Nikolić usually says that we want players performing at 85% over the whole season, rather than them performing at 90+% (peak shape) now and then. The key here is: stable high level of performance and injury-free for a long competition period.

So, how can one utilize training wisdom from traditional sports and apply them blindly to mixed-sports? Square peg + round hole = bad things.