Problems of the Periodization of Training in Mixed Sports (Part 5)

Posted by Mladen Jovanovic on 20/05/2011 in Membership Content, Planning Strategies

Model of the competition microcycle

On the following picture there is a model of competition microcycle (Sunday, and Wed-Sun model, although there are a couple of models) 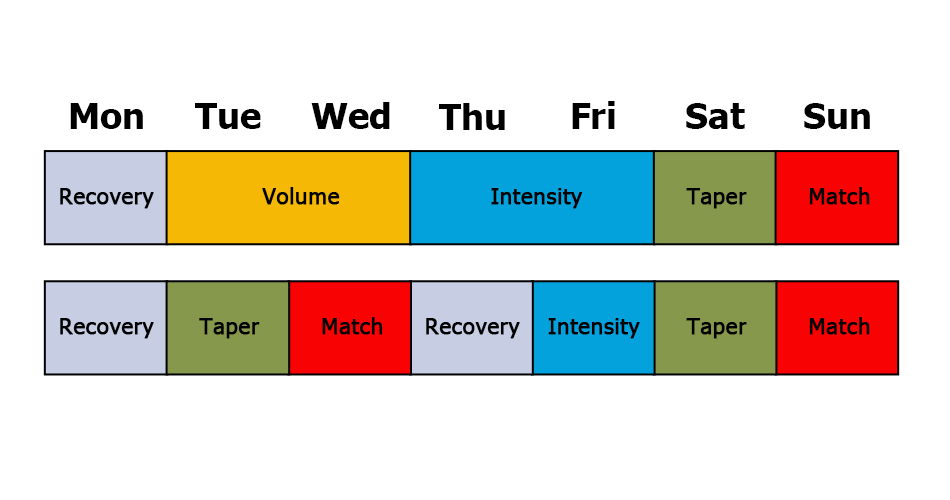 One thing that is rather obvious is block organization of the competition microcycle. I call this macro~micro, where the micro elements have similarity with macro elements (like atom and galaxy, microcycle and macrocycle).

Besides macro~micro concept, competition microcycle can have weaknesses~strengths organization, where in the first part one works on weaknesses showed in the previous games (make sure to keep to your general plan and not to jump bandwagons after every game), and work on strengths and lifting confidence of the team before the next match. Another concept can also be variable~stable where one is breaking up the performance and work on it in the early part of the microcycle, and later provides stability of the performance (which also increases confidence). There is also general~specific concept, where you get more and more specific as the match closes by (field, conditions, equipment, time of day, specific game-like drills, etc) .

Also note that the recovery part of the microcycle can be extended to 1-3 days, while the taper and intensity parts somehow blend together. Anyway, we are left with a small amount of time (1-2 day) to work on our physical preparedness.  Depending on the PI  (Peaking Index) and the number of days between games and travel factors this time period in which we can utilize development loads can even be shorter and the load utilized even smaller. Time crunched we are.

First off, maintenance (lower priority of development) of maximum strength (MxS) is of highest importance, since if the strength levels fall, the power will fall, power endurance will fall and injury risk will be higher. Thus, we need to find time for 1-2 (depending on PI, days between games and travel) strength training sessions. The key point here is to keep the intensity high (doesn’t need to be done to failure though, but in terms of percentage and weight used) and volume low. Also, another key thing to remember is that keep doing the exercises you have introduced in the preparatory period – don’t make drastic changes (weight, number of sets, exercises) because you might induce soreness and heavy legs. I made this mistake couple of times. I will be back on this concept.

Second important thing is speed and power because it has the shortest residual training effects (based on Vladimir Issurin). Thus, you need to keep doing it. Doesn’t need to be general, but you can rather utilize sport specific drills (especially in agility). You can also use this in the taper part of the microcycle in the smallest amount. We also call this training session toning session  where you tone CNS (whatever that would be) with high speed, short duration and long rest drills, or even some strength training (complex training). This session can even be done morning before the game.

And last but not the least comes conditioning. Since we are time crunched and there is plenty of research on it, in my opinion, we should rely more on higher intensity training, both for aerobic power and glycolytic power/capacity and RSA, since it is time efficient and provides good stimuli for maintenance. During the recovery part of the microcycle, we can utilize more low intensity prolonged type of activities (water running, bike, non-specific and no-pounding activities).

Now the question is how to organize this, both in terms of (1) microcycle organization and over the (2) whole competition period.

For the microcycle organization we can utilize Tudor Bompa’s principle of energy system rotation, where each training day is stressing certain energy system. For example, one day we will do speed, power, agility and strength since it stresses ATP/CP mechanism. Other day we will stress aerobic/lactic system. This is not written in stone and I have seen successful programs doing strength and conditioning in the same day, same session, everything. I guess it depends on your situation, constraints, and context.   I highly suggest checking the following books: Block Periodization, Periodization in Rugby and Total Training for Coaching Team Sports since they cover microcycle organization.