When I was at the training camp (pre-season) with FK RAD we had a new head coach who was very pedantic and systematic. I really loved his style of coaching and I think I learned a lot from him. He showed me the best posible solutions of combining small-sided games (SSG), technique/running polygons with the aim of developing aerobic capacity/power along with overall coaching philosophy.

My role, at the moment was warm-up, cool-down, individual work with players and strength training. I was not involved in planning/programming like with ex head coach Marko Nikolić, thus I accepted this new apprentice role and I tried to learn as much as I can. My task was to help players and team to be physically prepared for the demands of competitions and training.

Back then I had lots of time so I wrote this useful blog entry.

In our first meeting, the new head coach clearly stated that to form cohesive group of players, one need the enemy, someone that repels players into cohesive unit. This strategy was also used in communistic counties where government inventedthe enemy of the country so does the citizens would be more cohesive. In this case, head coach is the enemy. We, assistance coaches and other stuff member should be good cops in this relationship with the players.

Before we started the training camp we did laboratory testing to find out:

Although the optimal test for each parameter was slightly different, the testers we hired decided to pick up the following test since the vVO2max and vVT were the most important parameters to be found. 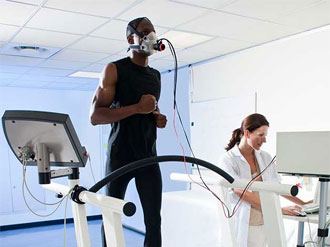 The protocol consisted of treadmill running at 0 or 1 degrees, starting from 10kmh-1 and increasing the speed every minute for 1kmh-1 until exhaustion or VO2max platoue.

I have checked the results in the literature and what I found is that they are test-dependent. For example, in the study by Bragada et al.they showed that 3,000m male runners have around 70 mLkg-1min–1, 19,8 kmh-1 vVO2max  and 17,7 kmh-1  V4 (or velocity at 4mmol lactates which should correlate to ventilator threshold). Are my guys super-efficient, or something else? The protocol in this study consisted of incremental protocol similar to the one we did, but the speed increased every two minutes compare to our one minute.

In the study by Gaeini el al.they utilized the same protocol as we did and the results were close enough to ours (58 mLkg-1min-1 VO2max and 19,8 kmh-1 vVO2max  ), but the subjects were professional endurance runners. I can’t get the vLT from the abstract, but I wonder if it was close to 16-17 kmh-1. I wonder how come these professional endurance runners have almost the same result as mine out of shape soccer players in the off-season?

I mean, WTF? Are my guys super-efficient or there is some sort of error?  I have checked some data from Dan Baker’s articles and the vVO2max of his rugby players are around 4,4 to 4,8 ms-1 (or 15,84 to 17,28 kmh-1). He recommended couple of tests to determine vVO2max

1.      5-6min running test, where the goals is to cover the greatest distance

Thus I decided to screw the laboratory testing since the results are so dependent on the testing protocol. Next time I will listen to Dan Baker’s advice and do only field tests. My picks are:

1.      Yo-Yo Intermittent Recovery Test Level 1 (to see if they are game ready, since it doesn’t tell you the vVO2max. Check here for more info)

3.      5min run in shuttle arrangement as a another way to determine vVO2max

If I ever decide to do treadmill run, I will do the protocol similar to Montreal Track Running test where speed increases for 1kmh-1 every 2 minutes.

In my starting years as physical preparation coach in soccer I have put great emphasis on extensive tempo running as a form of conditioning. Recently, I started to utilize Billat 15/15 and 30/30 intervals for maximum power development (improvement in vVO2max along with some improvements in vLT). At the moment I am wondering what adaptation is pursued with extensive tempo?

Late Charlie Francis utilized extensive tempo as a form of active recovery for his sprinters and work capacity development (whatever that may be actually). Another claim that is circulating around the internet is that extensive tempo causes capilarization of the fast twitch fibers, and thus better heating and nerve impulse transmission. I am not so sure whether we have empiric proof of this claim.

Anyway, extensive tempo consists of running certain distance (100s, 200s even 300s) below 75% of top speed (for that distance) with relaxation and walking between runs for about 40secs. Extensive tempo is usually done on the soccer field, where the length is run and width walked. Thus you run 100m for about 18 sec (5,5ms-1 or 20kmh-1) and walk 50m for 40sec. If you run 200s you run them for about 38 sec. The HRs are usually in the zones of 140-160bpm, but that depends on the implementation of 100s, 200s and 300s. I am wondering what type of central~peripheral adaptation is this type of workout causing. Take a look at the picture below for better visualization.

If we compare extensive tempo with aerobic power intervals, which are done at speeds around 15 – 18 kmh-1 with rest 1:1 (Billat utilize 15:15 and 30:30, while original track workouts may consists of 3-5 min runs with equal or slightly shorter active rest) we can see a lot of differences: speed is faster, work-to-rest ratio is around 1:2 and the rest is almost passive (walking).

2.      From the peripheral adaptation standpoint, work intervals recruit fast twitch fibers (since the speed is well above vLT) that spent CP and glycogen and build up LA and other “waste” products, yet during the recovery  slow twitch fibers “learn” to utilize (oxidize) those products and bring the homeostasis back to normal (or close to normal). Thus, this might look like an extreme fartlek workout around the vLT (see the New Interval Training) aimed at improving lactate shuttle and lactate removal, myoglobin content, maybe even CP contest (which might help in increasing the alactic threshold, a concept by late Charlie Francis). I am not sure if the total volume is enough to cause huge capilarization of the fast twitch fibers or increase of mitochondria (aerobic enzymes) in the fast twitch fibers, but I might be wrong. There might be improvements in the buffer system as well.

3.      From the central standpoint, the HR doesn’t increase all that much along with VO2 due intermittent nature of the extensive tempo. Thus, it is questionable how much extensive tempo improves central factors (cardiac output, stroke volume, etc) because the amount of time you spend at VO2max is zero to none (depends of course how much 200s and 300s you have). One factor that might be improved is the lag time or the ability of the CNS/ANS to mobilize physiological systems for homeostasis maintenance as fast as possible. For this reason, extensive tempo might be interesting for HIIT sports.

4.      Taking peripheral~central factors into account, extensive tempo might be useful for improving recovery capacity between short bursts of power, because it improves lag time of physiological systems, along with improving lactate shuttle mechanism, CP recovery and myoglobin contents without killing the athlete and fatiguing fast twitch fibers like real aerobic power and glycolytic power intervals (need a proof for this, not the gut feeling).

5.      The more 200s and 300s you include, the more tempo starts to become aerobic power interval training (due 1:1 work to rest ratio) or even glycolytic capacity workout. Thus, this might present decent transition to those types of workouts.

It would be nice to do a study where one would compare central~peripheral effects, along with performance effects (vLT, vVO2max, VO2max and efficiency) of extensive tempo, threshold runs, aerobic power intervals, glycolytic power/capacity intervals and RSA training. Until then coaches are left with a gut feeling.

My current recommendations, especially for team sports (soccer, rugby) for inclusion of extensive tempo in the endurance component during the preparatory period are the following:

Please check the Problems of the periodization of training in mixed sports for more info.

Since the extensive tempo workout comes from the sprint world (where it serves active recovery purpose and some aerobic workout) it might be difficult to implement it into training of other athletes (square peg + round hole) without deciding what adaptation is seek and how to incorporate it into the whole training system.

If someone is willing to provide more info on the adaptations of the extensive tempo please leave a comment or contact me via email.