I am back from vacation to Zakynthos and I am pretty much recharged. The rest of the season is about to begin and what we did last week in terms of physical preparation was testing of the players and creating player profiles (strength~weaknesses based on team rankings). The newest video by Joel Jamieson was really helpful in this regard (I will do a full review soon) since one of the presentations by Joel goes into the topic of creating athlete profiles based on the test scores.

Based on rankings (percentiles instead of Z-score since it is more easier to explain both to players and coaches and most of the time data is not normal), each player has spider diagram when we can clearly and quickly see their standing within the rest of the team, along with aerobic-anaerobic profile.  Also, each position has four composite scores (index scores) that include different tests with different weighting factors: speed, explosive power, endurance and strength. This way we can compare players on the same position to the physical demands of the same.   All of this can be found in great presentation by Joel Jamieson.

I am not going to describe our testing battery in great detail, but I will cover some interesting insights.

When it comes to speed tests, we did 30m run with 10m split, which gives us 10m time, 30m time and 20m fly time. For the agility testing we decided to do 505 Agility test (click HERE and HERE for more info). You can see how it is done in the following video.

Basically, what 505 gives us is the ability to change direction from high speed run. 505 Agility test did not correlate with 10m (r=0,16), 30m (r=0,17) which means we are measuring distinct motor quality.

The trick with this test is to take full speed approach in the 10m. I wonder would the scores be any different if the run-up was sub-maximal, thus making the COD quicker. On the flip side, submaximal run-up may yield longer times to COD line, but more tough COD.

I will try to find a reliability study for 505, but we are pretty sure the run-up must be controlled with achieving at least 90% of 10m sprint speed which might protects us from pacing of the athletes. If anyone has info on this or experience with this test please contact me or leave a comment.

The guys who sprinted the last lap during MAS test achieved closer HRpeak scores – compared to guys who slowed down at the end (as showed with higher SD of HRpeak as well). Thus, pacing is making conclusion on what is HRmax difficult and I suggest that to be really certain one need to use test specifically designed to elicit HRmax in running. Although 98% was pretty close.

One thing with 30-15IFT and with all other test that have discrete increments is that this might affect sensitivity and reliability of the tests (Martin Buchheit reported ICC r =0,96 which is high reliability. Check the study HERE). For example, we used as the score the stage (speed) at which the player quit/was disqualified (where Martin uses the last fully completed stage, which is basically our method minus 0,5km/h).

Without having the strict protocol about this it might affect reliability of the tests and thus its sensitivity to evaluate training effects. I know Martin Buchheit reported high reliability, but I would love to see longitudinal study reporting ES and percent change compared to CV of the test, since I think lower sensitivity can artificially improve reliability score (do I need a reference for this, anyone?).

Still, if I would design a test  I would love it to start at higher speed, have more stages at certain speed (instead of only one) and provide a way to deal with the situation mentioned (maybe timing of the quitting?).

Up to this point I find 30-15IFT the best test for creating individualize groups for intermittent conditioning.

Since writing on that bench study  I wanted to play with Power Tool / GymAware with my own training. So, I decided to give it a shot.

After couple of weeks of doing nothing, my lifts detrained a little bit, especially the bench press. I tested them using 1RM test with pause on the bottom of the lift and aiming to have perfect form.

My BW was 91.x kg in the morning, but during the testing was 93.3kg. I managed to do 100kg bench press (please don’t laugh – it was with 2 sec hold on the chest and no helper-spotter… don’t ask what happened when I tried 105kg), squat 155kg and pull-up with 45kg attached (which makes it 140kg total with BW). Everything was strict form with no psyching up, yelling and acting like a gorilla. Not too bad except the bench press.

So, I am starting a training program where my aim is to improve my VJ, counter movement jump with 20kg and 40kg (mean power to the bar – which means that I don’t take into account system weight, or in other words BW – I went with this with Dan Baker over the email) and bench throw with 40kg. I didn’t do any specific/dedicated testing for them, so I will collect the data from the week #1.

I have attached the week 1-2 program I created in Excel.  I basically used Joe Kenn template from Tier System and his percent based cycles for some of the lifts. 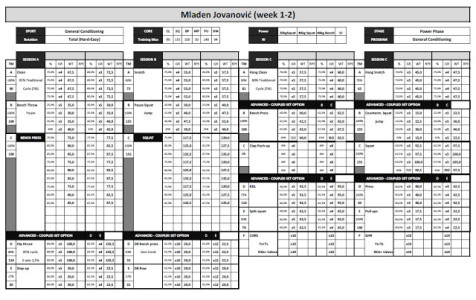 On the following video  you can see me performing bench throw with 40kg using Power Tool and newest version of GymAware iPhone app. It is AWESOME! I can take a real time video, then the app inserts power reading. This way I can see real time correlation of technique and power reading and then make correction, etc, etc.  Everything is so intuitive and quick and I am more than happy that we have Power Tool.

So, my power output (P40kg) is 354W which is 3,79 W/kg. I will see how is this going to improve over the weeks, along with 1RMs in bench, squat, pull-ups, VJ, and squat jump with 20 and 40kgs. Also, I will be doing running conditioning along the way. Will report back how this goes.