Anterior cruciate ligament (ACL) injuries of the knee represent a serious concern in sports, not only because of time loss from sport but also because of the long-term health consequences, including a substantially increased risk of knee osteoarthritis and impaired lower limb function 23 as well as a re-injury rate of between 5-30% depending on the pre-injury competitive level played, and the goals of the athlete post-injury 12 18. Following injury, return to sport (RTS) is generally permitted as soon as six to twelve months following surgery depending on the graft used in surgical cases 28 (or even sooner in the cases of non-operative management) and the desired level of risk 5. However, some authors suggest that return to sport might even be delayed until up to 2 years after surgery for the lowest chance of reinjury 16, which can be problematic given the often capricious nature of professional sport.

Case Study – How I Rehab an Athlete Post ACL?

For simplification, I generally loosely plan rehab into five distinct stages. The timeframes I’ve quoted are indicative to the ones I would use for a stock-standard ACL reconstruction post-surgery: 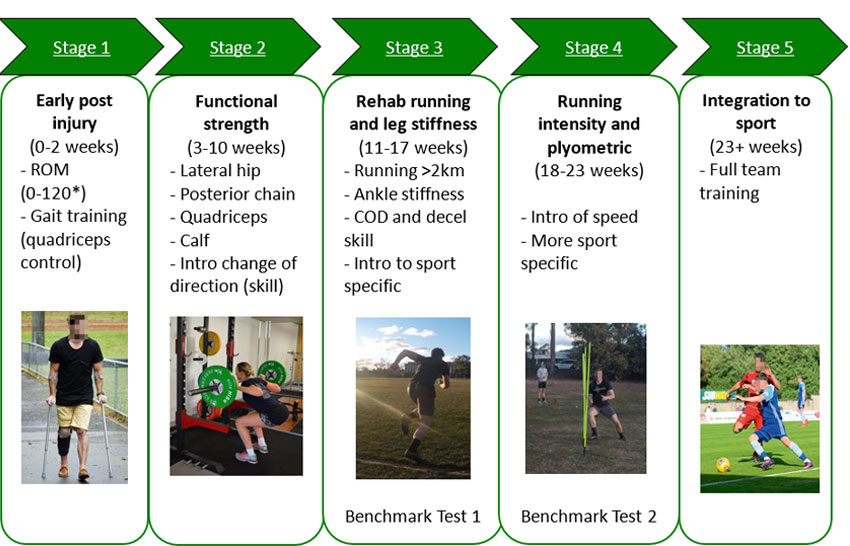 The goal of this phase is on restoration of range of movement, particularly normal walking and knee extension. The former is a vastly underrated quantity as the ability to walk with normal physiological extension of the knee implies good range of movement and quads activation. Once an athlete can achieve these two things, I will generally start active lower body rehab in the gym. Often there is some residual swelling during this phase and as long as the athlete can actively bend the knee past 120deg I’m not too concerned.

Due to Your High Interest, We Have Extended the Spring Sale

Hurry Up and Join Us While the Promo Offer Lasts!

Tim McGrath has extensive sports physiotherapy experience. He holds a PhD from the Research Institute of Sports & Exercise (UCRISE) at the University of Canberra on the topic of ACL rehabilitation of the knee. He is the current Physiotherapy and Medical Services Co-Ordinator at St George-Illawarra Dragons in the National Rugby League Competition (NRL), and since 2004 has previously worked with other high level sporting teams, including the Port Adelaide Football Club in the AFL (2015-2017), Brumbies Super Rugby Team (2006-2011), Sale Sharks Rugby Football Club United Kingdom (2006), and Canberra Raiders NRL Team (2004-2006). He has also toured with the Australian Men’s Rugby Sevens Team in the HSBC World Series (2013-2014). Tim has also enjoyed brief stints with other high level sporting teams such as the Tongan National Rugby Team and the Australian Rugby Union. He also consults to the ACT Comets and ACT Meteors Cricket Teams in Australia.

In addition to his undergraduate Physiotherapy degree and PhD, Tim has completed a post-graduate Master’s Degree in Sports Physiotherapy and Musculoskeletal Physiotherapy. He has also completed a Graduate Diploma in Extended-Scope Physiotherapy and is currently completing a Graduate Diploma in Data Science. He is Head of the Athlete Research Lab housed within Elite Rehab (www.ersportsphysio.com.au) and developed PITCH READY®️ which uses meta-data for return to sport decision making in athletes recovering from a knee or lower limb injury (www.pitch-ready.com). He has lectured extensively in sports physiotherapy courses for the Australian Physiotherapy Association as well as to other health professions and has authored publications in peer-reviewed journals (see research page of Elite rehab website). Tim has also previously consulted to the Canberra Hospital Emergency Department as an Extended-Scope Physiotherapist and to Occupational Rehabilitation Companies as a senior consultant.

This topic contains 3 replies, has 2 voices, and was last updated by