I decided to try out frequent training (upper/lower 6x/week) with using higher volume (lots of sets) of low reps with submax intensity and effort to explode on every rep as fast as possible. HERE is the Excel file with all the data and program outline.  If someone wants to perform certain analysis be my guest – Complementary Training members can find ‘pulled data’ HERE which I actually used for analysis for this blog entry.

Basically the program was doing Workout A (squat) and Workout B (bench press) every other day for 6 days a week for 4 weeks (although due skipping days it lasted a bit longer). On each day I did Olympic lifts (snatch on a squat day and clean on a bench day), but I haven’t taken those into workload account, since it was basically technique work but with a lot of sets (8-10).

I have tracked morning HRV and HRrest every day (or most days – hell, this is real life, if you track a lot of data it gets tedious).

Here is the setup of workout A (squat) and B (bench press). I have used 110kg 1RM for bench and 160kg 1RM for squat to estimate loads to be used on a given day (please check Excel file). 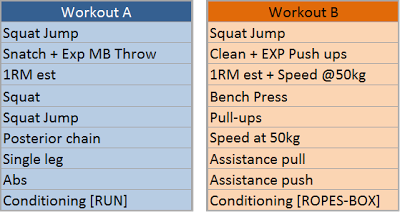 So I warmed up, tested peak velocity and mean power in 20kg countermovement jump (CMJ20kg) averaged over 5 reps on both days. This was my performance indicator.

On Workout A I also repeated CMJ20kg and calculated %decrement for both peak velocity and mean power to estimate fatigue.

On a bench day I also tracked best mean velocity with 50kg (pause bench press) before and after training to establish fatigue. In most cases this improved showing facilitation instead of fatigue (DISCLAIMER: what I have noticed is that usually the peak/max scores in a set are not that affected as are averages over couple of reps, usually 3 – thus it might be wiser to track multiple jumps/attempts with this goal since tired athletes might maintain power-force with one attempt, but over multiple it tends to drop, so that might be more sensitive to fatigue).

In the warm-up sets for squat and bench press I estimated daily 1RM using regression analysis of mean velocity of the lift. This was pretty unique approach and one of goals of this self-experiment.  For squat those were 3 reps with 70, 90 and 110kg (pause squat) and for bench press it was 50, 70 and 90kg for 3 reps (pause bench). Then I estimate 1RM using regression analysis: 0,3m/s for squat and 0,1m/s for bench press. I will expand more on this feature since I believe this is the first time someone documented this over a cycle.

I wanted to see any relationship with CMJ20kg performance decrement and this (between and within set decrement) as they did in THIS great study. Besides this study was the main motivator for this self-experiment.

High frequency lifting was fun for the first week. The second week was hell. Then I started skipping workouts and even had huge drop in estimated 1RM in squat and hence a lot higher corrected %1RM used that caused even more strain (hence the importance of auto-regulatory approach) and knee pain the days later. I learned the importance of starting VERY easy (not with higher volume as I did) and providing higher variability in load parameters in the week and between weeks (which I luckily did). Anyway, as a result of it both of my 1RMs improved along with my Olympic lifting technique and weights (haven’t tested these yet, but I can ‘feel it’ ).

One thing that I noticed is that HRV measurement needs to be kept very strict. I did it while standing after waking up and going to the toilet. Sometimes different modes of ‘going to the toilet’ yielded different readings (small toilet vs. big toilet) since I did before/after. Also, drinking a glass of water might yield different score, as well as walking to the kitchen. So, really stick to one routine. I would say: wake up, walk to toilet, pee, measure HRV, continue with the rest of your life. 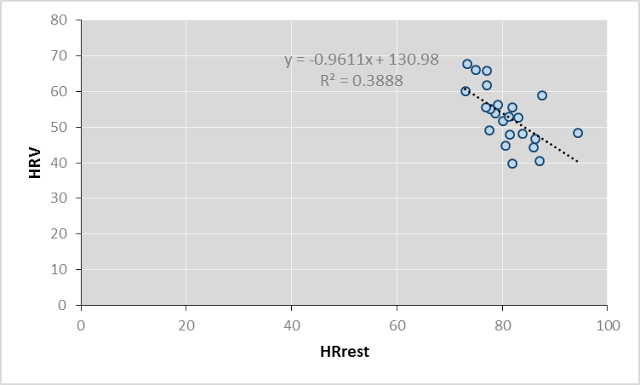