Some Great Findings and Ideas From Velocity-Based Strength Training

Posted by Mladen Jovanovic on 07/08/2013 in Membership Content, Strength Training

Some Great Findings and Ideas From Velocity-Based Strength Training

I have been thinking more and more about velocity-based lifting recently as a method of prescribing load and volume for an individual. I have wrote couple of blog posts and article on this topic that you might want to read first:

The mentioned links should cover the bases. What I want to do now is to discuss possible applications and some interesting findings.

I have re-reading great paper by Izquierdo et al. Effect of loading on unintentional lifting velocity declines during single sets of repetitions to failure during upper and lower extremity muscle actions and I came to couple ideas.

What the researchers did is to perform Bench Press and Parallel Squat exercises to failure with 60%, 65%, 70% and 75% of 1RM, while trying to perform each rep as fast as possible. 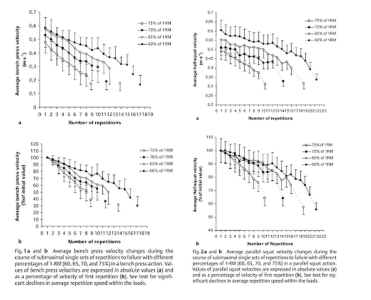 These graphs are very interesting and I will get back to them, but first I want to convey some of my ‘insights’ using velocity measurement in the gym over the last year and something.

Here is the load-velocity table for my ATG pause back squat and pause bench press I did somewhere in February this year. This is based on the first rep for each load which is usually the fastest. 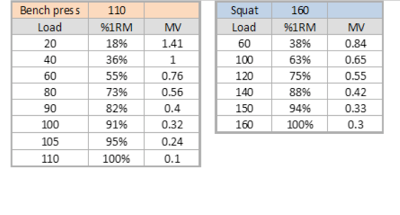 I we visualize %1RM used in bench press and squat and mean velocity reached, we get the following graph:

What is immediately apparent is that the slope of the curve for bench press is steeper. We can calculate those and we get -1.46 for bench press and -0.89 for squat. In plain language, one tend to lose more speed with increasing loads in bench press than in squat.

Another apparent feature is that velocity at 1RM (we are going to call it MVT – minimal velocity threshold) is lower for the bench press (~0.1 m/s) than for squat (~0.3m/s). We can talk all that why this might be the case – but at the end of day it is not really important. What is important is to remember that there is different MVT for every exercise and that they differ from individual to individual (not much thought).

What might be interesting to find out is weather MVT changes when some improves his 1RM? According to study by González-Badillo and  Sánchez-Medina (Movement Velocity as a Measure of Loading Intensity in Resistance Training) it is not changing over time, at least for bench press 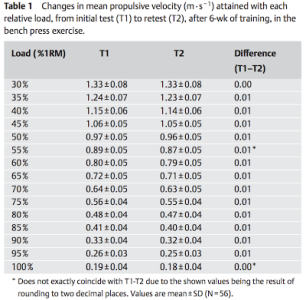 This is important for couple of reasons – we can use velocity to prescribe intensity. Even more important is that 1RM might vary from day to day due readiness or normal variability, thus using %1RM might be misleading and not taking into account improvements or decrements in strength. Using velocity might solve this issues, along with being auto-regulatory in nature.  Long story short, instead of prescribing 5 reps with 80% 1RM, one might prescribe 5 reps with 0.5m/s starting speed. What is also interesting is that providing immediate feedback might increase motivation, competition, stability of performance and higher improvements – based on the studies by Randell et al. (study1, study2), at least for jump squats – but I believe that this might be true for non-ballistic exercises as well.

Ok – this is what happens to the velocity of the first (best) rep across loads. But what happens to velocity when we repeat sub-max sets to failure? That is also what the study by Izquierdo et al ought to find out.

What we can see from the graphs (see at the beginning of this article) is that the velocity across reps is falling down quicker in the bench press than in squat. I will get back to this soon and why is this important.