Posted by Mladen Jovanovic on 12/09/2012 in Non-Membership Content
Weird title, right? Well, maybe. Without sounding New Age, and without making you guys think I am finally losing it, I think they are connected in a certain way. When it comes to this topic, people were mostly relying to the case studies and the word of mouth, but lately science is catching up – and it seems that traditional wisdom was mostly right.There is a huge discussion on the topic of fasting lately and it is going mainstream more and more. I am soon expecting to see “experts” on this emerging in my area claiming that we were wrong all the time and that breakfast was source of all evil. But I digress. The first time I’ve heard about (intermittent) fasting done in an organized and scientific way was by Brad Pilon and Martin Berkhan . These two guys were among the first to write about it and utilize it on themselves and their clients. I highly suggest checking their work, along with other links that will follow.

Another interesting video I saw was on TED regarding cancer and how to ‘prevent it’ and ‘cure it’. It deals with reducing capilarization (anti-angiogenesis) of the tissue.

I connected these two, since the BBC documentary claimed that IGF-1 (insulin like growth factor) was (among most) responsible factor(s) for health issues and aging. And in the BBC documentary they claim that protein was the biggest factor increasing IGF-1. And IGF-1 is also factor in angiogenesis. The thing is that eating a lot of protein and having higher IGF-1 was also a goal of looking good and performing well.

Now, I ask are these two (actually three) goals in direct conflict? I depicted these issues in the Venn diagram: 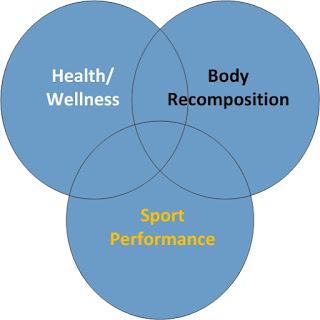 People tend to equate improvement in health and losing weight (body recomposition). Lyle McDonald has warned against this for years. If you are very obese, losing weight will definitely improve your health not matter how you do it (eating paleo style, or eating at McDonalds with reduced amount). When it comes to below normal ranges  (below 8% in men) in body fat, extreme results need extreme measures and different  training/diet combos have emerged (zig-zag, Lyle Ultimate diet 2.0, LeanGains, etc). But having this extreme body fat will not yield any further health improvements and may actually decrease the health and your social life and relationships (fourth circle anyone?). For sure it will decrease you performance (Martin Berkhan might argue, but having 5% body fat and working out 3x per week for an hour or two in the gym is not my definition of a pro athlete)

Same thing with performance circle. You gain strength for example, you increase bone mass, you improve hormone levels, you improve both health and body composition. But as you race for better performance you might end up screwing both your health and body composition. There is a fine (but blurry line). The professional athletes are the best proof of this.

Pursuing extreme health and longevity, you might end up looking like a zombie and being “frail” (due decrease muscle mass and power due aging).

The point of this discussion is that this Venn diagram defines both context and goals. Solutions to those goals might share common means up to certain point and then they split to extremes and demand extreme approaches.  Depending what you want to achieve you chose different tools and approaches.

One of the best self-experimentations on different (intermittent) fasting protocols was done by John Berardi HERE. He experienced a lot of problems from going fasting once a week to twice a week – his mood was worse, motivation to train was down the drain and performance as well.

Going back to fasting. I think there is something to it. I will share a personal story.   In high school there was one period where my mind was restless, with ruminating thoughts and probably obsessive-compulsive disorder (I was “obsessed” with symmetries of objects). Back then I stumbled on a book on Ayurveda and I tried a fast period they prescribe. Basically you don’t eat for couple of days, only drinking water and/or tea. This is the same protocol Michael Mosley did first in the BBC Documentary.

During that period I was going to school and that caused problems. I almost fainted on the day three and my concentration was… non existant. That’s why I suggest doing this when you are free, probably in nature or temple, or whatever.

Anyway, after this fast most of the mentioned problems were GONE! I suppose going on ketones (check Lyle’s great book on the topic) makes your brain circuitsreset. Sounds New Age, but more and more research is coming out when it comes to fasting and depression and any mental issues.

I think every now and then (maybe every 3-4 month) one should do this to calm himself in the hectic world. Going out somewhere in the nature, being alone or in a calm company, being relaxed and reflecting might be a cure for some.  In the BBC Documentary a doc recommended to Michael to repeat this procedure every now an then as well.

So, maybe all those religious ideas on fasting and cleansing are not so wrong after all. Your body/mind needs a break to repair itself. The question is how to utilize these ideas having Venn diagram above in consideration? How to do it in the modern world, when you have performance goals for example?

Well,  Michael Mosley found a solution that suits him, his goals and context. He continued doing 5:2, where he fasts (actually eat a lot less food) for two days after 5 days of normal eating. Another strategy might be Brad Pilons where you completely fast once a week. John Berardi did this with success. A lot of religious practices suggest this as well.  The only problem I see is how to (should you in the first place?) do it with full time athletes and where to put it in the week structure.

Having said this, I guess doing 5:2 or 6:1 might be interesting idea, with occasional 3-4 days full fast. Again, check the Venn diagram and try to identify your position.

No worry, I will be back on the monitoring issues very soon.