Soccer Performance Masterclass was a live experience with real case applications from the top level in Soccer.

In this masterclass, Efthymios Kyprianou attempted to demonstrate real-life scenarios in a weekly plan. In the first video, he presented the theory and research regarding speed in soccer, and how we can differentiate the speed into neuromuscular and metabolic components.

After the theoretical part and in the second video, he showed two training sessions demonstrated by an NEA SALAMINA FC women’s team: a Strength session (neuromuscular demands) and an Endurance/Speed session (metabolic demands).

The speed masterclass was part of the Soccer Performance Masterclass hosted by PIS Fitness on February 7th, 2022, a 1 Day specialized webinar, designed to provide trainers, coaches, and team managers with advanced knowledge of soccer-specific training and performance optimization. 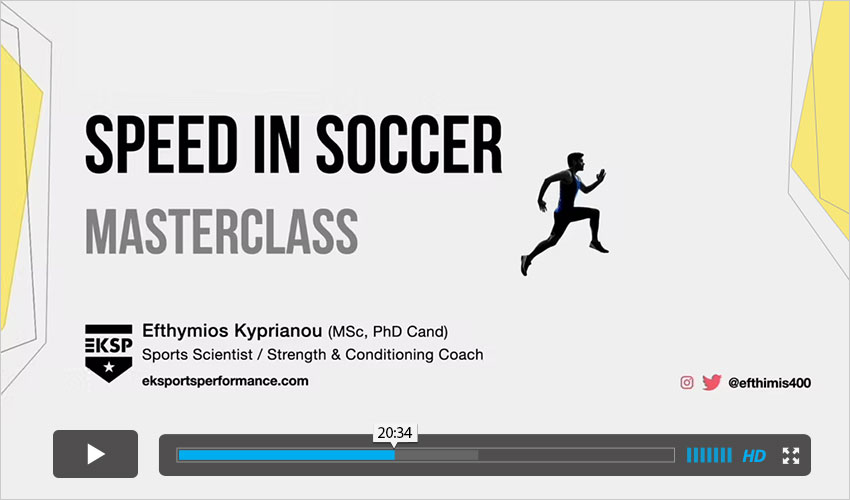 Efthymios Kyprianou holds a Sports Science degree from the Aristotle University of Thessaloniki and an MSc in Sports Coaching & Management from Kingston University, London. He is currently a Ph.D. Candidate at John Moores Liverpool University. Efthymios also holds a UEFA A coaching diploma. He is a professional Sport Scientist and Strength & Conditioning Coach, mainly focusing on team sports. Efthymios is the author of the eBook “Balancing Physical & Tactical Load in Soccer: A Holistic Approach” which describes a novel approach to the physical preparation for soccer players. He has been working for years with major clubs and teams, such as the OFI FC, Aspire Academy, Qatar Football Association, Cyprus National Soccer Team, AEL FC, Apollon Limassol FC, and Apollon Ladies FC. His research area emphasizes testing and monitoring soccer players in relation to maximizing their performance.