Soccer is one of the most popular sports globally, and as such, it has attracted much attention from experts in sports science and S&C coaches in the last two decades. With the rapid growth in every sense, the entire staff for sports science, performance, and performance analytics are currently involved in soccer.

We always ask: what is the most important thing to train and how to train? The answer is complicated, and in this post, we will discuss strength training methods and how to apply them in practice.

Strength is one of the most important motor abilities in almost every sport, including soccer. Why? Without adequate and optimal strength and power, the athlete is not ready to meet today’s elite sports demands.

Strength is the ability to produce force against an external resistance, and this will be the only part of the literature in this post. Strength and power in soccer:

First, we ask the question: can we use different methods, schemes, classical periodization in sport such as soccer?

The answer is yes and no because we have unpredictable circumstances and many things that we cannot influence independently. However, on top of all that, we need to do something.

The preparatory period in soccer – load distribution and how to apply strength and power training?

Scenario 1 – Strength Training during the preparatory period without the training in the off-season period.

Let us take into account that our preparation period is four weeks, as is usual in soccer. In case we have 5-6 weeks, we have more space and more time to realize certain things.

Week 1 – Testing – introductory week. After we have done 1RM maximum tests for specific exercises that we have selected, we design a plan and program for a preparation period of 4 weeks. In the first week, we will introduce our players to strength training by training anatomical adaptation and muscle hypertrophy, which means a larger volume and lower intensity of exercises, or a lower% of the repetitive maximum. Below we will make a muscle hypertrophy program on an individual level for one player of 4 exercises for the lower part and four exercises for the core.
We will take as an example that we do strength training on Tuesday at MD + 3 if our game is on Saturday, Sunday is a day off, on Monday we are recovering, and on Tuesday morning, we are doing strength training. 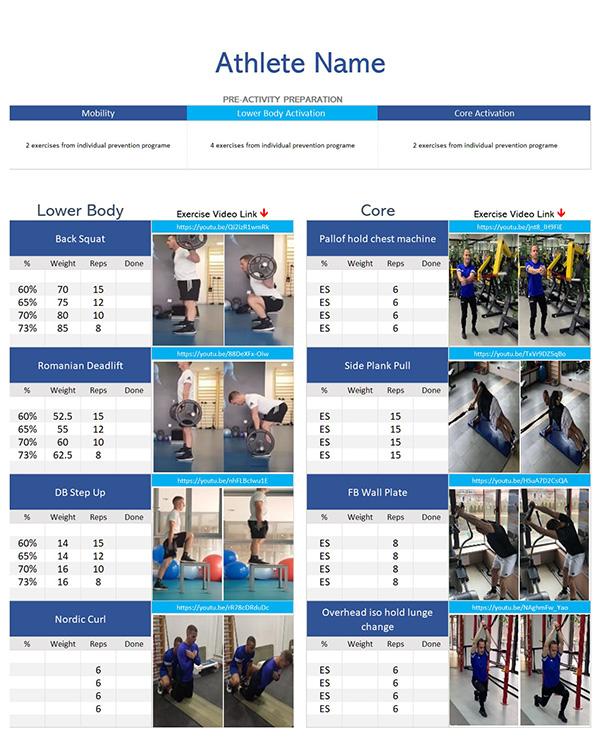 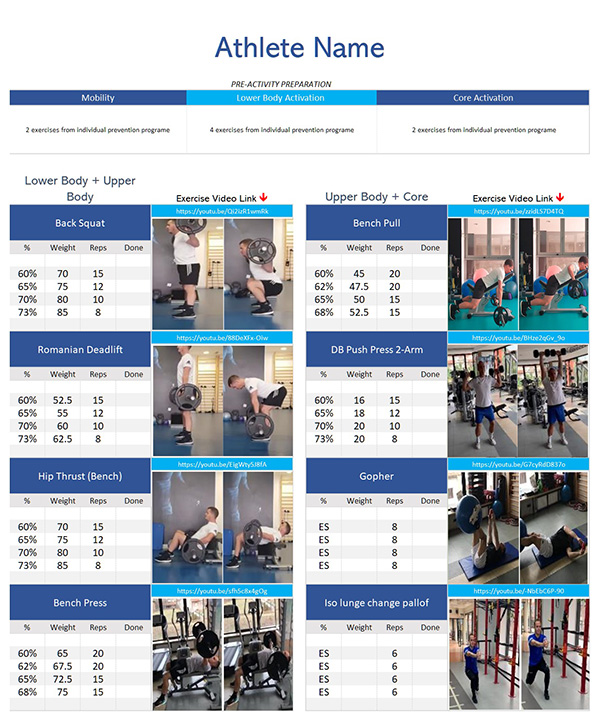 Distribution of training and load during the four weeks of the preparation period, selection of exercises, and muscle contraction type.

When to put in the “real” strength training in the microcycle in soccer, and how much space do we have to do that?

The first thing we need to pay attention to is that soccer players generally do not like to do strength training because their primary tool is the ball.
Should we go for a 1RM load in a back squat exercise or achieve approximately the same load through the single leg or unilateral variants?
Below, you can see a couple of examples on an individual level for a soccer player. 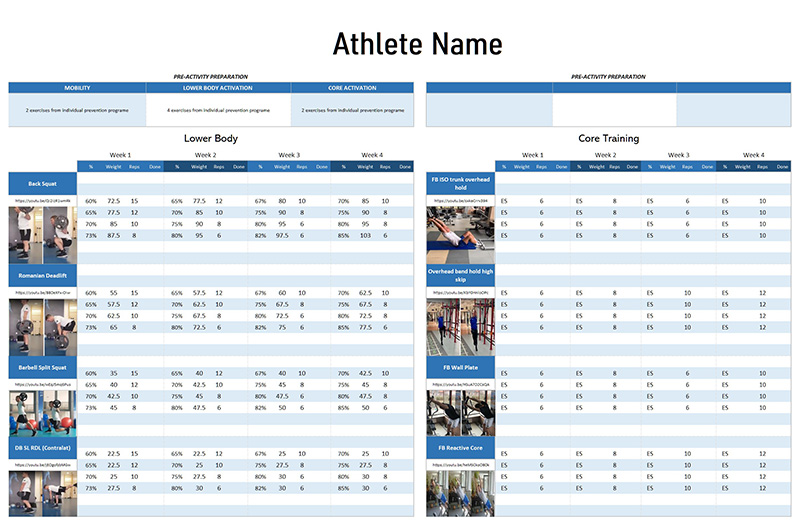 When we look at this, it seems great at first glance, but when we think about it, is it useful, and the question we should always ask ourselves: is this the right way to train strength during the preparation period? Well… The answer can be yes, but it also can be no.

Someone will try this method and may “work” with his athletes, and in many cases, they certainly will not.
When designing strength training, we need to consider a lot of things. One of these and perhaps the most important in the history of our athlete’s training status, that is, how much experience does he give them in working with the load and in what way is it best to do it? The next thing and approach based on which we design strength training, in my opinion, is not to increase 1RM to my player (because I do not get any significant benefits from it) but to protect him from injuries or design strength training based on my player’s injury history.

Soccer is a sport that has many unpredictable situations to which we have to adapt. As such, it is difficult for us to plan anything (in the long term). We can, but those plans will be difficult to achieve. That is why we must have a multifactorial and phenomenological approach and look at things more broadly. 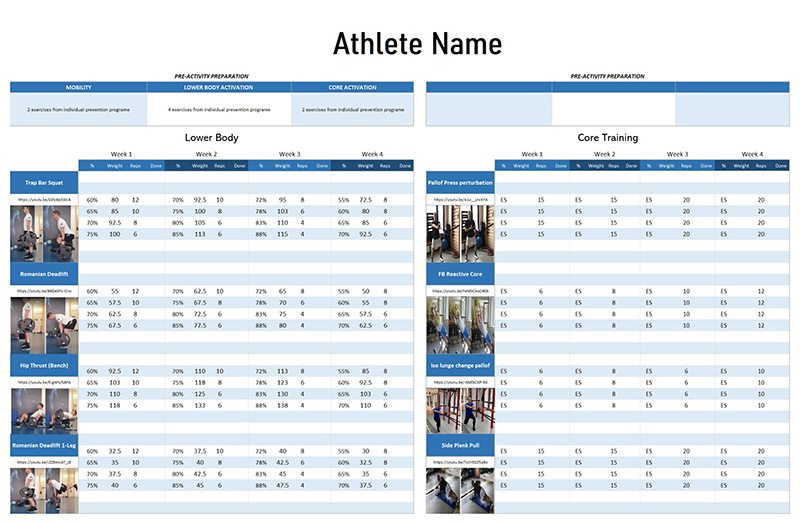 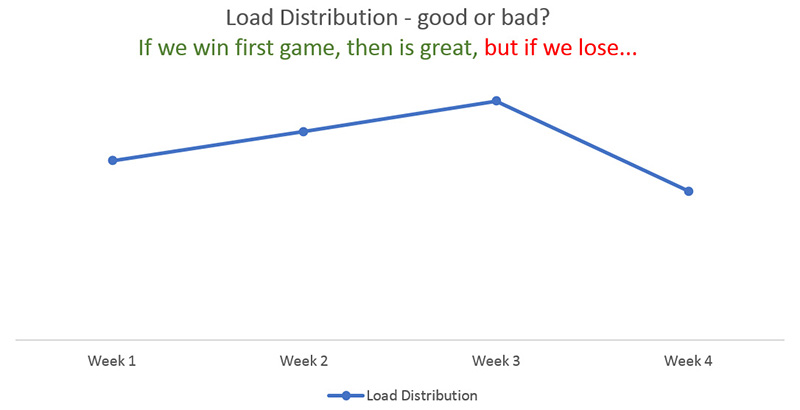 This is a model we usually have and for which we will never know if it is good or not. Why? The answer is that a soccer game is not measured by the percentage of load in strength training but by the number of goals scored in the game and the victory or defeat. If the first game comes after four weeks of the preparation period and we win the first game – the preparation period’s result is excellent, and we should always implement the same strength training methodology? The answer is no for the simple reason that we have to take a vast number of factors that affect it all.

Training templates with three contractions can be given to our athletes depending on what we want to train. In the example, you will find four exercises that are included in the program. Exercises can be selected in several ways:

There are many combinations that we can select depending on the goals that our athlete needs. 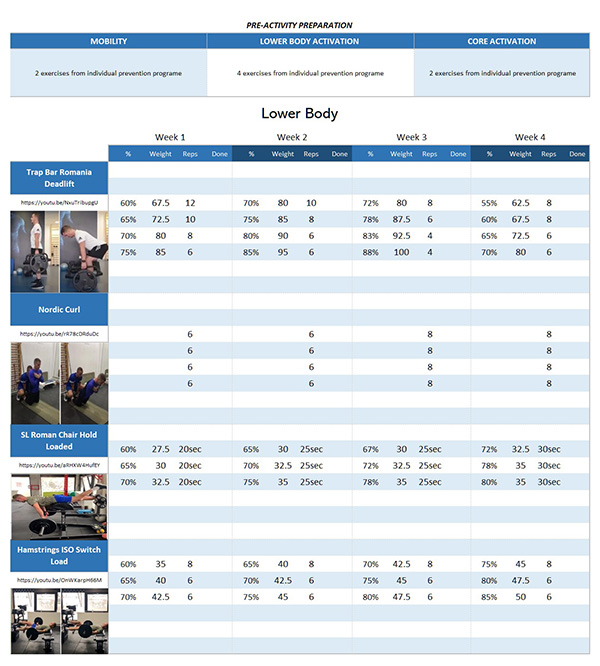 The off-season is the period we use most often to improve strength if we have enough time because, during the season, we have almost no time to dedicate. Let us have an example again where an athlete has a four-week break. We will give him two strength training during the week for the lower part of the body from the first week. Training types can also be divided into push/pull variants and different methods already mentioned above.

An example of bilateral strength training during the off-season period emphasized general exercises in the first training session of the week. 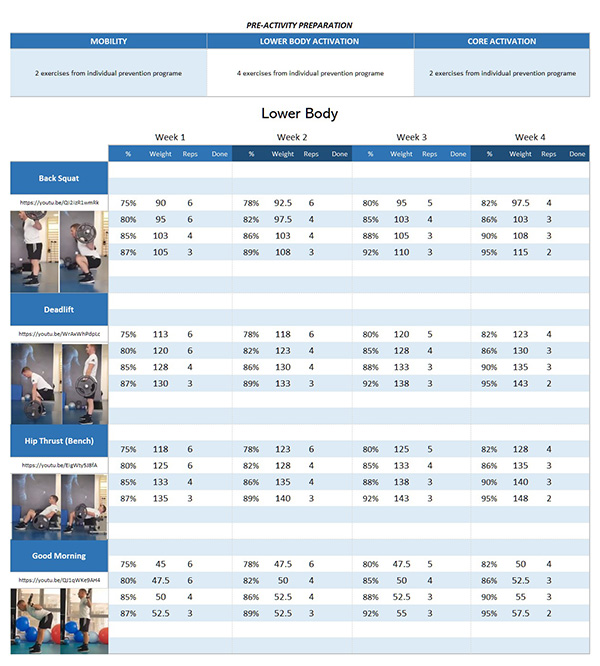 An example of second strength training during one microcycle in the off-season period with a unilateral variant of training, and a less number of repetitions and less volume. The intensity is moderate to high, depending on what the player needs. 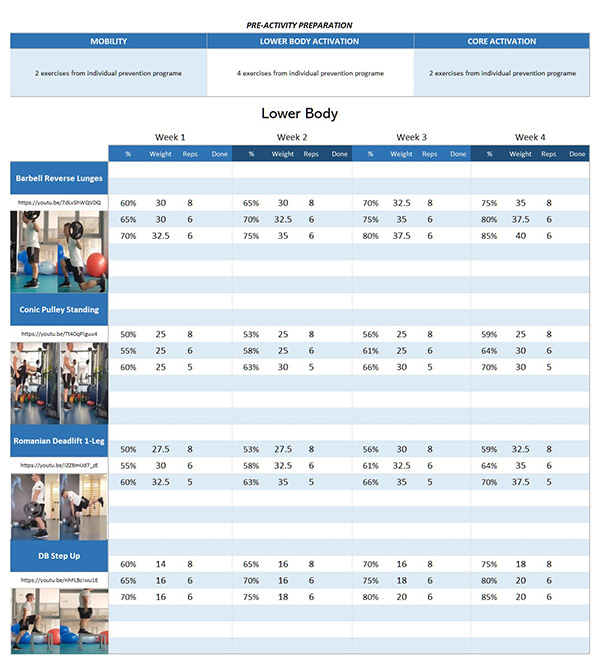 During the week, the second training can be specific if the athlete suffered a hamstring injury during the season and that training can only be adjusted accordingly. Again, depending on when the injury occurred, the athlete’s current condition, the training load is designed based on current capabilities. An example is the following: 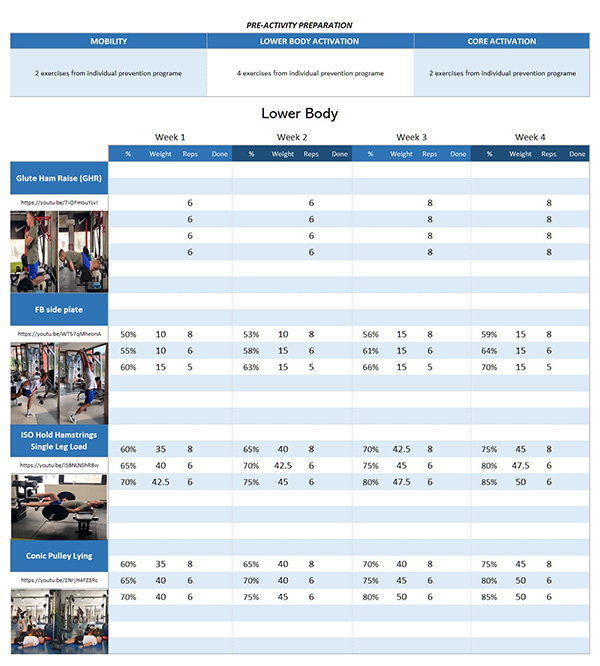 In case we have done a controlled strength training during the off-season period, we can design it in the preparation period in several ways.

After, let’s say, a good off-season program, we can choose different ways to do the preparation period. The first example might be having a 4-week block with an emphasis on power training with less volume and moderate-intensity or percentages of 1RM and deload phase in the last two weeks. 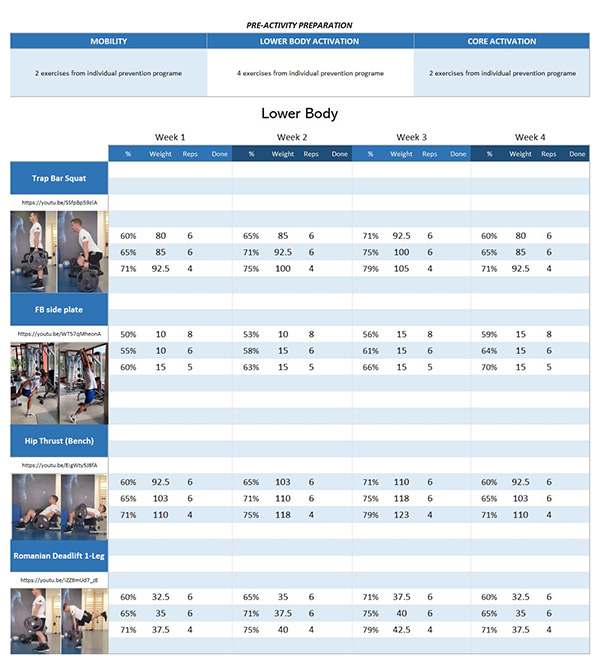 The following example may be different combinations of exercises with isometric, eccentric, and concentric contraction of moderate intensity. Here is one example using Frans Bosch methods combined with Hamstring hold and data with force sensor attached on the ground with a hip belt. We can determine the load in this exercise by testing MVIC on this exercise and determine how much from the maximal isometric force we want to train during strength training. Again, these are just guidelines. 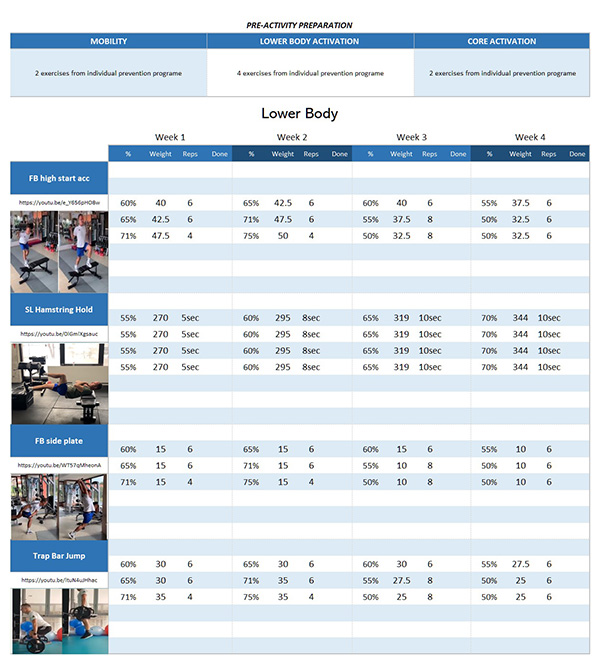 During the in-season period, the number of matches dictates the load that we will and the way how we will carry it out. If we have a tight schedule of Wednesday-Saturday matches, we almost don’t have time to perform strength training with the starting 11 players. When I say strength training, I mean loads over 80% of 1RM. One of the variants, in this case, can be the methods of Frans Bosch. 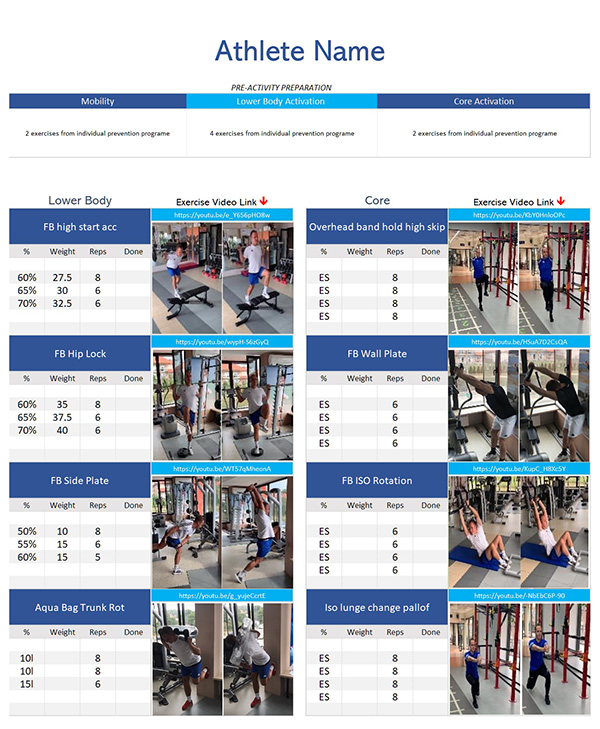 In general, strength training in soccer is always tricky, and we must always observe and take into account many factors based on which we conclude the current load and the microcycle. Different approaches to strength training such as isoinertial training, accentuated eccentric training, tempo training, Frans Bosch methods, isometric training, quasi-isometric, and various other methods that can be used in soccer must be carefully selected and selected at a given time. I cannot answer precisely because it depends on many factors that I consider when designing strength and load training. For example, one of these factors may be the wellness questionnaire. If my athlete slept 3-4 hours the night before strength training for some unknown reason, and I planned training of 85% -95% of 1 RM, is it smart to work “planned” in advance? Of course, you have to make sure he did not lie to you because he just does not like to do strength training.

“Periodization” coaches probably would be, but I do not want to get an almost dead player for the weekend game. So, we need to be flexible, to be prepared to change our approach in a minute, basically, dependable on unpredictable factors.

Below, you can download PDF templates for 4 weeks preparatory period. The first one is 4 weeks planned program, and the second one is a program based on individual sessions with different examples.

Aleksa Bošković is a strength and conditioning coach from Serbia. During his career, he worked in professional soccer clubs from Serbia and China. He holds a Bachelor’s Degree in Sports science from the University of Novi Sad. He is a certified ASCA Level 2 coach and EXOS Performance Specialist.