I am very happy to announce that I am finishing the Strength Training Manual. I decided to publish chapters here on Complementary Training as blog posts for two reasons. First, I want to give members early access to the material. And second, this way I can gain feedback and correct it if needed before publishing it.

I look forward to hearing your thoughts.

Before diving deep into the planning section, it is important to understand the basis of the percent-based approach to strength training, particularly what these percentages are based upon, how to test 1RM and prescribe a training while using it as a reference point, how to compare individuals and other topics. As explained in the previous chapter, we made a rough division of the exercises into grinding and ballistic movements. Most of this chapter will deal with the grinding movements, but applications to ballistic movements will be covered as well in the later section. The reason for this is to avoid confusion – prescribing for ballistic movements is a bit trickier and it is important to digest grinding ones first for easier comprehension. Let’s start by discussing the concept of intensity. 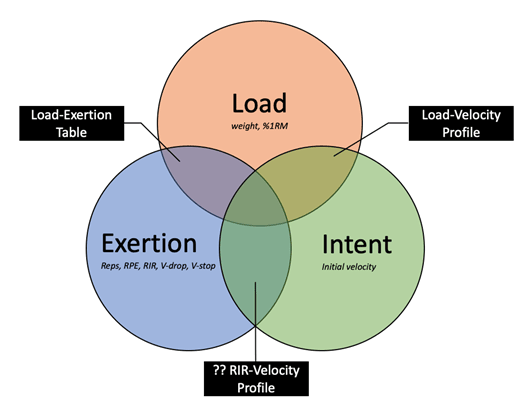 Load – relates to the weight the athlete is lifting in a given exercise expressed either in absolute terms (i.e., kilograms or pound), or in relative terms using the percentage of one’s 1RM (% of 1RM). For example, if an athlete is performing bench press with 100kg (absolute load), and his known 1RM is 110kg, then the load is 90% (relative load). Additional way to describe and prescribe intensity would be using repetition-maximums or RM. For example 12RM load is the weight that can be lifted for 12 reps without technical failure. This type of load prescription combines load with the exertion component and utilized load-exertion relationship or table (see later in the chapter). Novel way to express load is using velocity (i.e., initial rep should have mean concentric velocity of 0.8 m/s), but this type of load description utilizes load-velocity profile (see later in the chapter) and demands special equipment for measurement.

Sometimes athletes’ bodyweight needs to be taken into account (e.g., chins, pull-ups, dips and even squats). For this reason we differ between external load (external weight attached, using barbell or dip belt) and total system load (which is total load that athlete is lifting or overcoming, usually bodyweight plus external load). As you will read later in this chapter, we can use both when prescribing using a percent-based approach.

Intent – relates to an athlete’s will to perform a repetition of a given exercise with maximum possible acceleration and speed, usually in the concentric phase. Effort could be maximal (the synonym would be C.A.T. – compensatory acceleration training) or it could be sub-maximal (lifting with certain tempo). Tempo is usually prescribed using the following nomenclature:

For example, prescribing squat with 1/3/2/X tempo means the following: hold for 1 second at the top, lower down for 3 seconds, hold for 2 seconds at the bottom, and lift as fast as possible (“X”) on the way up. These tend to become a bit confusing in the pulling movements and deadlift, where one starts with the concentric movement first. In this case I suggest writing tempo with a note to avoid confusion.

Table 4.1. Relationship between Reps In Reserve (RIR) and Rate of Perceived Exertion (RPE). This is simplification, since relationship is not linear.

Please note that these are subjective ratings. This means that athletes give these ratings after a given set is finished. Another implementation of these is conceptual which is useful in planning and progression (as will be covered in Chapter 5). I personally prefer to use RIR, because it is conceptually simpler, and I will use it in the load-exertion tables and formulas (see later in this chapter).

Using the previous example, performing 8 reps with 12RM load represents sub-maximal exertion with 4 RIR. RPE is in this case around 6. Performing 12 reps with 12RM represents maximal exertion with 0 RIR and 10 RPE. Lab coats would probably complain how these are non-linear and depend on the relative load (%1RM), body part, exercise, gender, and the alignment of Alpha Centauri A with Proxima Centauri in the closest galaxy to Milky Way. As stated numerous times already, I am not trying to provide precision, but meaning (forum for action). As you will read in the later in this chapter and in Chapter 5, RIR represents an actionable concept for planning progressions in training programs.

Besides RPE and RIR, there is a concept of relative intensity (RI) that express exertion as percent of maximal reps. Using the same example, performing 8 reps with 12RM represents, 8 / 12 or 66% RI. Although some coaches prefer this approach, I am not a big fan, since it is biased to reps being performed (e.g. compare 8 reps with 12RM which is equal to 4RIR and 66% RI to 4 reps with 8RM which is also equal to 4RIR but  50% RI).

Novel ways to estimate exertion involve using velocity-stop and velocity-drop (Jovanovic & Flanagan, 2014). These refer to how much, usually the concentric mean velocity, drops compared to the fastest or initial rep. These are just a fancy way of saying that closer to failure, the slower your movement (assuming maximal intent on every repetition). These concepts will be explained later in this chapter when discussing velocity-based training (VBT).

These three components of intensity are important to be differentiated and I will stick to this terminology from now on.

The more weight is on the barbell, the less reps one can perform. This relationship is expressed with Load-Max Reps relationship. Of course Mr. Lab Coat, this relationship depends on the age, gender, experience, type of exercise, body part and Einstein’s Relativity Theory. But, as opposed to you, dear Mr. Lab Coat, we coaches need to take less than perfect tool in helping us to get oriented and start from somewhere (and we have athletes to coach; we cannot just claim “more research is needed”). If you remember, Mr. Lab Coat, for the most part of our history we used geocentric model of the Solar system (assuming Earth is in the centre and Sun revolves around Earth) which, although factually wrong, allowed sailors and explorers to orient themselves.

This table can be represented with a simple equation:

Does this prediction formula works for everyone and for every exercise? No! But it is simple enough to be useful. Besides, when we make prediction errors, and we do make them, we want to make Type I errors (undershooting; see Chapter 1). More about this later in this chapter.

You can use this table and formula as rough estimates. For example, you can probably do 5 reps with approximately 85% 1RM.However, it must be noted again that some individuals differ drastically. For this reason, use this prediction (and everything else in this manual) as a simple prior that you update (see Bayesian updating in Chapter 1) as you collect more data. If needed, you can also make individualized Load-Max Reps table by performing at least 3 sets to failure with different loads (e.g., 40, 60 and 80% 1RM) and then use linear or polynomial regression (or trying to find individualized parameter, which according to Epley’s formula is equal to 0.0333 for the average athlete). This can be done (or can be estimated from training logs using embedded testing method from the Agile Periodization, which will be explained in Chapter 5) for strength specialists, but most of the time, it is not needed for the strength generalists (nor there is time to do so).

Epley’s table and formula can also be used to predict 1RM. For example, if you lifted 100kg for 6 reps, according to Table 4.2 this represents 83% 1RM. To estimate 1RM, you need to divide 100kg with 0.83, which is equal to 120kg. Faster way, that referring to Table 4.2 is using the following equation:

The beauty of Epley’s equation is in its simplicity. And it is very easy to remember. There are numerous uses of this simple equation, as you will soon see.

Combining load-max reps table with RIR as a metric of proximity to failure (exertion), we get the next very usable table that is helpful in prescribing and analyzing training programs (Table 4.3). This table represent one of the cornerstones of the percent-based approach described in this manual. 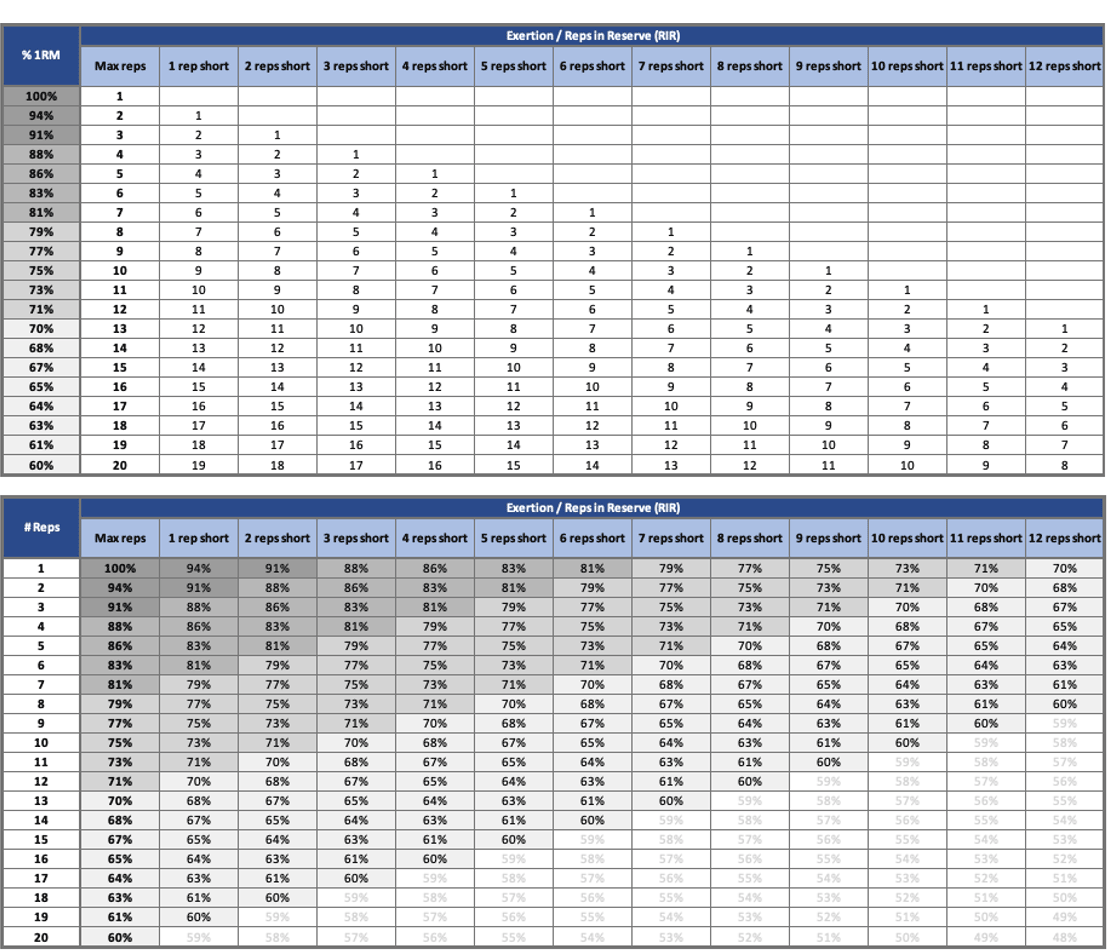 The above two tables (Table 4.3) are identical, they are just organized in a different way to help find either a number of reps that needs to be performed, or percentage that needs to be used. Here are two examples: