Posted by Mladen Jovanovic on 11/06/2011 in Non-Membership Content, Training Theory

In my humble opinion this is THE ROOT PROBLEM of training process and influences everything else down the road (hierarchy). This has bothered me since I started coaching education, and recently with the help of Complementary Nature I managed to solve this issue.

In the training theory everything revolves around MOTOR ABILITIES and MOTOR SKILLS. There are numerous classifications systems, combined abilities/skills, transfers,etc, etc.What I found out using my Squiggle Sense is that this is along the line of the ancient dilemma of Greeks regarding what is the essence of an apple? They came to the dichotomy: substance~form.

Please read more about it here, along with  very interesting dichotomies or squiggles.

The point being take here is that is not either/or proposition, but rather both~and. The apple is both~and substance~form. And by the way, this is not only related to apples mind you, but rather to everything.

Numerous training systems tried to deal with this dichotomy. I will classify them into mechanistic and organic/holistic.

Mechanistic systems were based on the mechanic and linear understanding, where substance (abilities) are identified as separate objects like a bricks and the training process is organized like a wall-building. You have bricks and you build. Mechanic, highly linear. Whole Old School and Matveyeev periodization was based on this mechanistic understanding of the training process. You have general abilities that are developed in GPP (general preparatory period), combined into specific combinations and integrated in the form (technique/skill training) during the SPP (specific preparatory period) and maintained during the competition period. Will all this comes the idea of Sport Form and it’s cyclic nature that is based on the wave-like forms of sporting results.

I always felt that there is something smelly in this approach. I mean, how can you develop endurance or strength or anything else, as a form of general ability that somehow exists in a something (Platonistic world of ideas anyone?) without ever considering the competition exercise and its biodynamic structure? Yet, exactly how mechanistic education of coaches was developed: this is how we develop endurance, this is how we develop strength, this is technical stereotype you need to imprint with drilling, etc, etc. We actually had a faculty exam on this called Antropomotorika, and it is still listened at my Faculty.

Organic/Holistic Systems utilized System Approach to this problem, and recently Complex System Approach. I am aware of two systems utilizing these ideas. First is training systems by late Professor Yuri Verkhoshansky and the second on is constraints-led approach to motor learning by Keith Davids et al. I can also include Central Governor Model by Professor Tim Noakes too.

Basically, professor Yuri identified this same dichotomy of the training process, and he stated that two complementary ways of improving (maximum and~or average) power in competition exercises are:

2. Improving the capacity to use that motor potential (technical/tactical skill – Bernstain’s Motor Control). 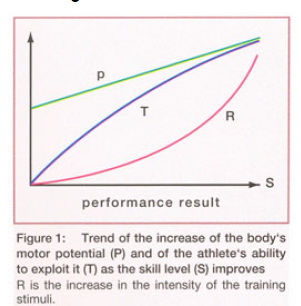 There are no motor abilities per se, but rather different characteristics/qualities of Specialized Morho-functional Structure (substance) that is built of Functional Systems. There are no rigid distinctions of GPP/SPP  and every mean that brings~helps up the reaching of improvements of the power output in the competition exercises or its support (injury prevention, consistency, etc) has a time and place in the training system. Thus, there are not general abilities, general athleticism, yet this doesn’t mean that there are no general  exercises in Yuri’s system. This is not 180 degree turn, but rather a paradigm shift.

Thus, it is erroneous to say that Yuri’s Conjugate Sequence System (Block Training) is about sequential periodization of motor abilities. It is not. It is based on the analysis of Specialized Morpho-Functional Structure (SMFS) and it is about organizing training means and loads based on Adaptive Reconstructioning in SMFS and utilizing Current Adaptation Reserve of the organism.

One more time, please note that this is not 180 degree turn from mechanistic systems, but rather different paradigm. In Yuri’s system, training loads aimed in developing training potential precedes loads aimed at improving capacity to utilize those potential. This is similar to more mechanistic view of GPP and SPP, but it is still different paradigm. Please, note that there are critiques of this approach (for example Bondarchuk, as far as I am familiar, criticized this  sequential approach of  motor potential first then technique, and he utilized more complex approach)

Anyway, this article is not intended to provide deep analysis of Matveyev system and Verkhoshansky system, but rather point out to their conflict. You can find a lot more in SST: Manual For Coaches.

To conclude. Substance~Form is a root problem of training theory~process that was solved over time by  using more mechanical/linear approach or more organic/holistic approach.So next time you hear that traditional approach is linear, it is not linear because of linear progression, but rather because of it mechanic approach to solving substance~form dichotomy utilizing mixed-parallel approach and concept of general motor abilities. Newer systems, identified complementary nature of structure~form and complex nature of their constructs and constraints.

Next time you hear someone that is developing coordination, or endurance or whatever without referencing  actual construct in SMFS (motor potential, Functional Systems) and it’s relation to competition activity, then you know he is utilizing mechanic approach.

Truth is complementary, context dependent and usually in the shades of gray.