Tactical Periodization: Interview With Two of My Colleagues

Tactical Periodization: Interview With Two of My Colleagues

Tactical periodization is currently the hot topic of the most team sports periodization (planning) talks and discussions.  I think it has a lot to offer as the anti-dote to the traditional motor-abilities and physiology-based approach(es) who were dominating (and still are) the team sport coaches educations and practices.

Tactical periodization is, in my opinion, much improved model since it looks at things such as motor learning, decision making, performance stabilization and so forth, but not only on an individual level, but also on a team level which is of crucial importance to team sports (where team is not a sum/average of the individuals).

I am very happy to be sitting very close to Juan Luis Delgado-Bordonau and Jose Alberto Mendez-Villanueva who decided to share their thought on tactical periodization. I am pretty sure you will enjoy their answers. 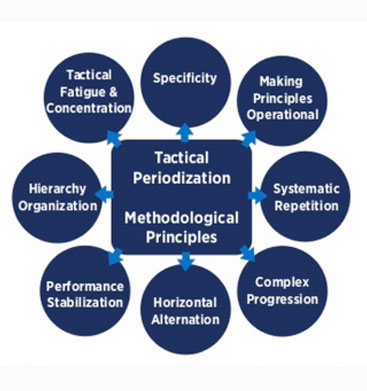 Mladen: Traditional training theory (one that is taught in Academia and comes from traditional Olympic sports) seems to be biased toward motor abilities and peaking, where Tactical periodization tends to focus on perceptual~movement skills and decision making (tactical skills, both individual and team) and performance stabilization. Can you please explain these differences and why we still tend to stick to Traditional approach (in team sports)? What are the benefits of Tactical Periodization approach and why we need this paradigm shift in team sports?
From our perspective, it seems that the proposals about the division of the season do not fit with football competitive demands. According to traditional theories, athletes need to get regularly periods of recovery, from beginning to end of the season. This is due to the need of a football player to be always near to his peak performance, in order to be effective both in practice and especially in games. Thus, this problem it seems to be complex. We question then, when, how and what kind of recovery is need it to suit current football demands?

Thus, we consider the proper use of recovery moments may influence the parameters that are directly linked to the quality of play of the team. One of the challenges in any training program is to optimize training stimulus, where the maximum gain in performance is achieved while training overload is avoided (Rowbottom et al., 1998). We corroborate such a statement, adding that it is especially relevant in football, with the proximity between the competitions. We also think that the Tactical Periodization Model has the potential to assist in this process, but some questions remain unanswered. That is, the precise point at which the training load should be suspended or reduced and the recovery phase privileged (Mujika et al, 1995).

Frade (In Martins, 2003) states that there is a need for the emergence of a new orientation regarding football training methodologies, as the models presented do not fit football requirements. Frade, pioneer in the implementation of the Tactical Periodization Model, defends the imperative need to privilege tactical dimension in detriment of the isolated conditional factors, since only the intentional action is educational (Martins, 2003). Faria (1999) states that exists a direct relationship between the concept of tactical periodization and the game model of the coach (style of play). He considers that it is essential to clearly define firstly the game model adopted before to start the periodization. In this perspective, Carvalhal (2002) presents the need to understand training in football as a “whole”, neglecting the divisions of its components (tactical, technical, conditional, psychological) advocated by previous periodization models. According to the author, these structures do not fit the football complex nature. Carvalhal (2002) also notes that in the Tactical Periodization Model, tactical component acts as a coordinator of the Game Model adopted and its principles in a dynamic planning and periodization process. The remaining components appear overwhelmed to the tactical component, without the need to maximize each of them separately. The recovery is also an integrated element in the training process.
The qualities and capabilities required in a match are indivisible, they never appear separately and therefore they should also be united in training practices.

According to Forteza (2001), Matvéiev have the paternity of a still valid scientific theory about sports training structuring and planning (even with extensive modifications). Several authors (Bompa, 1983; Gambetta, 1990) criticized Matvéiev for defending the use of general loads and high volumes in the basic stages of training as an undeniable factor and which cannot be eliminated as the general contents depend on the specific contents and vice versa. It seems that the criticisms made are some of the big questions that prevail in football training periodization. However, we ask ourselves the following questions:

On this regard, Carvalhal (2002) conceives that in football, training volume should be subordinate to intensity. But when training with high intensity, recovery must always be present between exercises in the sense to maintain the intensity of each of repetition.

On the other hand, the Tactical Periodization questioned this logic to divide the season into general and specific periods included in the traditional models of periodization. Frade (In Viera, 1993), when asked about how to structure a football season, he affirms that he does not divide the season using the traditional approach (macrocycle, mesocycle and microcycle) as he defends the importance to performance without oscillations over the season. He also considers the need to change the logic of the traditional periodization, where quality (specific preparation) only appears after a large amount of quantity (general preparation). In fact, when approaching football training we should consider specificity as a crucial factor. Thus, training should aim to be as specific as possible in order to enhance team and players’ performance during competition. Regarding the preparatory period, Frade (In Vieira, 1993) considers we must work according to what we will do in the competitive period. Nevertheless, the author states that, whatever we make during this period will never be responsible for what will happen five months later.

As per the competitive period, Frade (In Vieira, 1993) states that this is the fundamental period, indicating the importance of characterizing a pattern, a dynamic working model through establishing microcycle pattern. This pattern we will allow us to stabilize the distribution of training contents and consequently, the stabilization of the specific training load. The author believes that the game (football) is mainly a tactical process, and therefore the traditional view about the relationship between general and specific preparation needs to be reviewed. He truly defends the necessity to train in specificity (according to our style of play) since the VERY beginning, to let the players be adapted to the specific requirements of “our game”.

As per the concept of performance, Frade (In Vieira, 1993) considers that “it is resulting from a continued manifestation of regularities expressed by the team, which conform its identity”. It can be divided in three phases: development, maintenance and loss. However, from Tactical Periodization point of view, performance stabilization is achieved by distributing the selected content over the week in the same way (weekly pattern).

Mladen: In the Annual Planner for Team Sport v1.0 (FREE Download HERE) I have covered the following components in the annual plan: Football Training, Strength Training, Speed Training, Power Training, Special Conditioning and General Conditioning. What I found quite interesting is that coaches tend to fill out everything except Football Training (Skill) component. A lot of coaches are still in “Biomotor Periodization” paradigm and I got a lot of questions on periodizing strength, conditioning, speed and power, while technical/tactical aspects are left to be done ad-hoc in day-to-day basis. Why do you think this is the case?

From the tactical Periodization perspective the principle of specificity should direct the training process. It is arguably the most important principle of the Tactical Periodization. Specificity arises when there is a permanent relationship between all the dimensions of the game (tactical, technical, physical and psychological), and the training exercises are specifically representative of our game model (style of play). Therefore, the concept of Specificity directs and leads the “whole” training process. On this regard, Vitor Frade (in Silva, 1998), affirms that regardless of the training exercises’ features (e.g., with more or fewer players, larger or smaller spaces, etc), they should always be articulated in a way that allows our principles of play to be learned and transferred to the competition. But every exercise is just “potentially specific”. The fulfillment of the Principle of Specificity will be only truly achieved if during training players understand the aims and objectives of the exercise, they maintain high levels of concentration and the coach’s intervention is appropriated. Then, specificity is related to the capacity of make operational the principles of play, and their respective sub-principles. Thus, according to the Tactical Periodization, the Principle of Specificity should also lead the interactive intervention between the exercise, the players and the coach.

Specificity requires the concern of the technical staff to design the exercises as closely as possible for such a demand, in order to create in our training what we want to happen during competition. The way to make our style of play (game model) operational is through specific exercises. These will be the most effective way to acquire a strong relationship between information and action, in order to let the players to internalize the tactical knowledge inherent to our style of play.

So, training process should enhance solutions to meet the problems related to time and space management, “here and now” (Frade, 2006; Garganta, 2006). Also according to Carvalhal (2000), exercises in football have to simulate competition “moments”, without “misunderstanding” what is (or will be) the competitive reality. Each exercise has to possess the “components” of the game in its entirety meaning. According to Guilherme Oliveira (2004) training or training situations, only are truly specific when there is a permanent and constant relationship between all the individual and collective components (tactical, technical, physical, coordinative and cognitive) in permanent correlation with the style of play and its tactical principles.

This topic contains 4 replies, has 3 voices, and was last updated by