The running technique is crucial for the change of motion direction (Bompa, 1983; Sayers, 2000).
More specifically, the slope of the body and low center of mass are essential in optimizing acceleration and deceleration, as well as for increasing stability (Sheppard and Young, 2006). According to Ronney (2005) the preconditions for direction changeability development are:

Figure 8. Centre of mass position. Lower position of the centre of mass means more stability. Modified according to Rooney (2005). 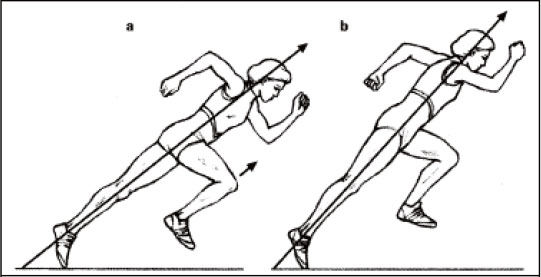 In the case of deceleration, an athlete has to slope backward in order to generate an optimal ground reaction force direction, that in this situation has to stop the athlete (Figure 10). 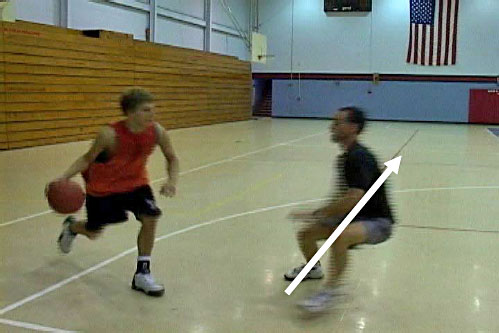 Figure 10. The backward slope of the body when stopping enables optimal ground reaction force direction in the athlete stopping direction. Modified according to Taft (2005b). 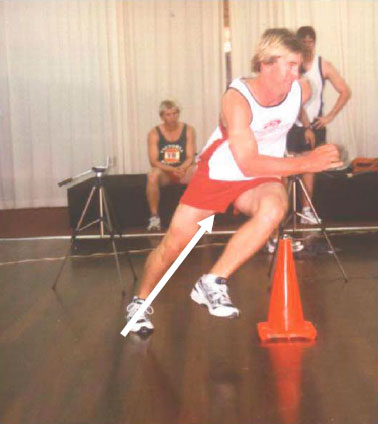 Based on the aforementioned examples, one could easily conclude that the technique of running and direction change refers to optimal “setting” of the centre of pressure, slope of the body, centre of mass and body posture, in order to gain optimal ground reaction force. Optimal ground reaction forces affect acceleration, deceleration, and therefore also the change of direction speed.

In his article, Sayers (1998), notes that rugby players run with slightly stooped upper body and big forward lean, and also notes that such a technique of running is not bad (according to the definition of athlete coaches), but optimal technique which is a result of long rugby playing. Sayers (1998) believes that this technique should be encouraged, and that coaches should not try to correct it by sprint exercises. Sayers (1998) also claims that sprinting exercises should be adjusted to rugby demands. Sayers (1998) notes that rugby players and sprinters differ also in “necessary time to achieve maximum speed”, knee lift height during front phase of swing, heel height during back phase of swing, distance between feet, hand work (when carrying the ball) etc. The reason for this is the fact that rugby players have to adjust running technique in order to achieve greater stability necessary for frequent changes of direction and duels during the game. Though there are some similarities between sprint running technique and rugby running technique, coaches have to recognize the main differences between them. Optimal running technique in rugby has to reflect in the player which has great acceleration, achieves quickly the maximum speed, has a great balance and the agility, the player that is careful in collisions and duels in order to avoid injury (Sayers, 1998). Ideal sprint technique has totally different demands (Sayers, 1998).

A review of the opinions and researches by Sayers (1998, 2000) reveals the greater need for specificity between training for sprinting and training for speed and agility in sports that require frequent changes of direction. However, sprint running technique in the acceleration phase is similar to that suggested by Sayers (2000). In fact, a pronounced forward lean and low centre of mass is an integral part of acceleration in sprinting (Francis, 1998), as well as in agility sports (Sayers, 2000). The obvious difference would be that in athletics, sprinters are taught to keep their visual focus low during acceleration phase (Francis, 1998), while in agility sports, the need for visual scanning disables this demand (Sheppard and Young, 2003).

In addition, sprinters might purposefully accelerate under control, in that they do not necessarily aim to achieve top speed as quickly as possible (Francis, 1998). This could be a consequence of tactical requirements, in order to achieve top speed in optimal portion of the race, i.e. minimizing the fall off in speed in the last portion of the race, especially in 200m sprint, but also of higher top speed which they achieve (Sheppard and Young, 2006). Unlike in sprinting, in most team sports sprints are short and on various distances. Athletes in these sports aim to achieve optimal speed as quick as possible. So, training of straight speed for sports except sprint, includes the need for maximal acceleration, i.e. achieving the highest speed possible in the shortest time period (in addition to including relevant cognitive and skill demands) (Sheppard and Young, 2006).

A very interesting research was conducted by Besier, Lloyd, Cochrane and Ackland (2001), carrying out biomechanical analyses of planned and unplanned changes of direction. Unplanned changes of direction were caused by reaction to a light stimulus. Though this light stimulus was not specific for sport, it set a time limit to subjects. Researchers noted that the knee-joint load was considerably higher in unplanned changes of direction, which could cause a higher risk of ligament injury. The authors suggested that a bigger load in knee joint can be a result of the insufficient time necessary for the optimal adjustment of posture and leg position when changing the direction. Therefore, learning to react faster to a change of direction stimulus in sports not only improves performance, but also can lower the risk of injuries.

Though there are efforts of some coaches to teach athletes the change of direction techniques, there is no study that could support the existence of an optimal technical model for the adjustment of posture and limb position while changing the direction (Young and Farrow, 2006). This stands in a stark contrast to numerous researches of straight sprint technique, which is a predictable closed skill. Given that, Young and Farrow offer two suggestions. The first one refers to the need for the identification of specific motion patterns used by successful athletes in particular sports. Practicing those specific movements (motion patterns) could have a bigger transfer to the performance on the field than the general training of agility i.e. the changes of direction. The second suggestion refers to practicing the change of direction techniques with time-limited game situations, because this exercise forces athletes to make quick adjustments of posture according to the situation demands. Practicing the change of direction techniques using various obstacles (cones, sticks, ladders) as a form of motion patterns directing is limited because it allows unplanned postural adjustments without time limits, so it could cause unnatural moves that do not appear in the game (Young and Farrow).