I am going to say it straight ahead – coaches who believe that they are training peak power at certain percentage of 1RM are simply misguided. 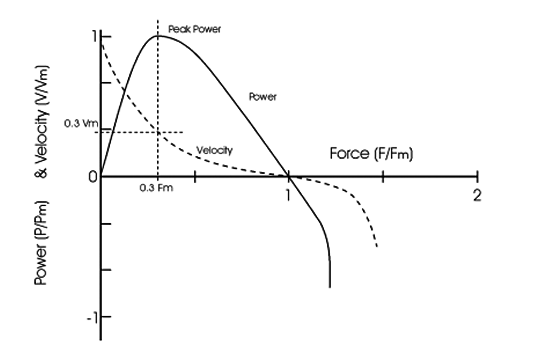 There are two important logical errors behind it [IMHO]. First one is the belief that there is a magic bullet – a certain % of 1RM intensity that will result in peak power output and in return training with that peak power output will result in great transfer [power and explosiveness] to all other zones or related activities (e.g. improving power using jump squats will improve sprint speed, jump height or even 1RM). Using that intensity you are training [mythical creature in Platonistic world of motor abilities] POWER. Using any other intensity you are not training power.

Second one is the belief that there is peak power. This peak power is TOTALLY dependent on the way/method it is being calculated. There could be 100+ methods of calculating it and all of them will result in different % of 1RM (Range: 0-80% 1RM). Let me expand. To get power, one needs two variables: instant velocity and instant force.

When it comes to velocity one could measure velocity of COM [Center of Mass] of both the athlete and barbell or only velocity of barbell. This will create different velocities. This could be also measured using 1-LPT [Linear Position Transducer], 2-LPT or 3D video analysis.

When it comes to force one could measure it using force plate directly or estimate it by using reverse dynamics [speed is derivative of position, acceleration is derivative of velocity and force is acceleration times mass involved] from positions derived by using LPTs. Also, estimating force from acceleration demands multiplying it with the moving mass. What is moving mass? Is it barbell only or body weight and barbell? Someone use 90% of body weight, some use 100% and some use 0%.

When we decide on all of these then we have range of movement. Are we going to use full concentric ROM or only part of it where acceleration is >0 [Fmuscles = Fgravity]? Or when Fmuscles start to actually break the movement (which actually happens with lighter loads – you engage the antagonists to stop the movement) and that the point where P [power] < 0.

Taking all of these into consideration it could be confidently said that the peak power concept is measurement/analysis dependent. And even if it existed I doubt that training at that intensity will provide a magical transfer to everything else that demands power output.

Another thing I actually hate is seeing this in studies. Researchers measured 1RM and power output at 50% or any other percentage of that 1 RM. Training over time improved 1RM. Then they measure power output at the same 50% or any other percentage of the new 1RM. Depending on the method of measurement (see the above) they might see statistically insignificant (don’t get me started on this B.S. concept) change in power output or even a drop. So they conclude that improving 1RM doesn’t (statistical) significantly improve power output. Well, duhhh. What about measuring it and comparing it at the same absolute weight, like P60kg (power output with 60kg)?

So, after all this rant what is the solution? One should do needs analysis and check what are the loads and resistances one needs to move during one’s sport. Then one needs to increase the SPEED and EXPLOSIVENESS at which one is able to move those around (including bodyweight). Improving this demands working over the full force-velocity continuum and applying different methods of training and not only trying to find peak power intensity that is going to magically improve everything else. First of all this isn’t going to happen and second it is measurement dependent and really hard to find. One exception to this rule might be cycling. They measure external power and they can manage the gears to take advantage of it. This peak power is usually around 80-100RPM (if I remember correctly), but the cyclist also train at cadences above/below that.

To conclude – One needs to train to be more powerful (faster, more explosive) over a range of intensities  instead of focusing on one small zone.