Following up with Agile theme, I had couple of thoughts crossed my mind recently and they involve some of the ideas from Nassim Taleb on risk-management.

Hopefully you are already familiar with Agile/Scrum terminology – if not any Scrum book will help or this glossary.

If you are going to fail, fail early and cheap

This idea comes from Scrum – if you want to plan any risky activity (and usually that is more unknown high-intensity stuff) do it EARLY – DO NOT save it for later pre-season. As the season progress, the risk should drop since there is not much wiggle time for corrections.

This brings me to the idea of saving key friendly matches and testing for later pre-season – we need to risk early and gain valuable information while we still have time to fix things. So these should be planned at fast as possible and not saved later. 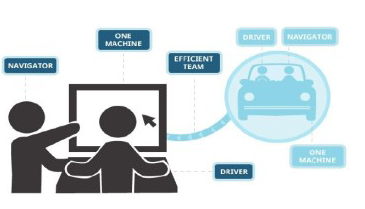 When designing training cycles, coaches can pair up (i.e. work in pairs). This idea comes from programming, where two programmers can pair up every sprint and work together on the same problem. One could be responsible for actual coding and another could be there to shadow and ask questions and clarifications. The roles can change for every task and partners can rotate to avoid knowledge silos.

This might sound like a waste of resources, but it is not – the partnered up programmers make much fewer errors/bugs and are able to solve problems much quicker. When stuck, just verbalizing one’s dilemmas to your partner is a huge step to solving them.

Rotating partners on different tasks every now and then make everyone familiar with everyone and with everything and hence avoiding knowledge siloses. In our case coaches can back-up anyone in the case of holidays, sickness and so forth. Besides having a partner makes you more accountable to your performance training programming and mitigates risks of bad decisions.

In practice, this might mean that coaches should rotate on tasks such as writing gym programs, rehab and RTP protocols, warm-ups and so forth, along with changing partners. Having shorter cycles (sprints) makes learning from these efforts much faster since the feedback is more frequent.

If the playing squad is pretty big (over 30 players), the coaches can…