During CPD week at Aspire Academy in June, my colleague Alex Natera asked me to contribute by presenting on Velocity Based Strength Training (VBT). Which I wholeheartedly agree. 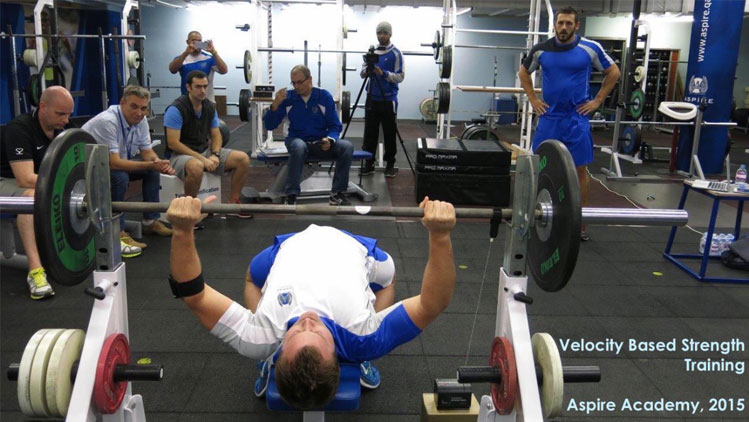 I knew I was preaching to the choir of experienced coaches, so I wanted to cover practical applications of the VBT as one “novel” way of prescribing and controlling training. I thought live testing would be much more appreciated than fancy graphs and theory, as it would also show the problems of “when the rubber meets the road” issues (as I like to call it). Which it did.

I’ve used the chance to compare two units: GymAware and the novel PUSH device. Our lab rat Patrick Mills a.k.a. Paddy (to whom I want to thank) was performing incremental 1RM test, and later two sets to failure with 85% and 70% of established 1RM. The bench press was performed with the ~2sec pause at the chest, just the way Paddy like (not). The whole testing protocol, raw and unedited could be seen on the video below.

We had slight issues with the PUSH band during the video, but I’ve entered the corrected values after the correcting it on the PUSH Portal. You can find all the corrected values in the Excel workbook attached. The problem was that with PUSH the user needs to manually correct the number of reps if the system can’t recognize the correct number. This needs to be done for the latest set, and in the current iPhone app it can’t be done historically. Unfortunately, it was my mistake of not telling that to the Scott Saunders who was operating with the iPhone (thanks for that Scott). Luckily this was corrected after the video in the PUSH Portal (website) and I uploaded the correct numbers.

Anyway, the numbers seems to be different than GymAware (there is constant drop; bias; in velocity) in incremental 1RM protocol, but with sets to failure there were quite non-linear and “jumpy” as opposed to GymAware. Exactly what I refer by “when the rubber meets the road” and why I wanted to make this practical workshop. Things in practice don’t look as nice when presented in a journal or a conference.

I didn’t had the mic in the gym, hence the sound is not great, even after filtering the noise in the movie editor (which reduced it significantly). The second part of the presentation had some glitches so I couldn’t fix the audio and it was uploaded as raw file to Youtube. Hopefully you won’t strain your ears much while listening.

I would also like to thank Alex for organizing, Darren Roberts for participating after his CPD presentation on “herding the cats” and his work with highest level extreme sports athletes (we might plan VBT workshop in UK soon, watch this space), Lee Christopher for assisting Paddy in the bench press (and showing us all how to cheat in reps to failure 🙂 ), Evan Lawton from GymAware and Rami Alhamad from PUSH, as well to all of my colleagues that attended.

On the link below you will find PDF of the slides, as well as Excel workbook used to compare GymAware and PUSH and to create VBT profile for Paddy’s bench press that could be used later in prescribing and correcting training.

This topic contains 2 replies, has 2 voices, and was last updated by