In the great TED talk, David Epstein raised a question are the athletes really getting faster, better or stronger, and provided compelling evidence that they are not (or not as much we would like), but rather it is technology that propels the results forward.

Without going into details and providing thorough scientific rationale, I wanted to chime in on this topic. This is just my current opinion and of course I may be completely wrong, which I accept and I am open for corrections and feedback. Anyway, treat this as a casual beer chat, but without beer.

Here is my list of things that I consider a good potentials for driving results forward in no particular order of importance (I might missed some; see the above):

Since David Epstein covered technology in the video above I will skip it, since I agree with everything he said.

Improved coaching and training methods? Might have some contribution – how big is that contribution, science needs to tell. Might be smaller that we hope for anyway. Nothing new under the Sun. Whatever you think of today, probably philosophers in Ancient Greece argued about it.

Human evolution is probably not happening that quickly (or in that direction) to be even considered. With modern medicine, almost everyone can survive and replicate and that might eventually en up screwing up our, by thousands of years, selected and evolved genotype. We are the descendants of those who survived famine, floods, wars and God knows what other types of setbacks, so I am not sure that modern medicine, with all it’s remedies, might be helping in continuing this trend. I am by no means supporter of Nazi philosophy nor saying that we should throw weak babies like Spartans did, but we might need to consider that evolution might not be heading to a direction of propelling sport achievement. Again, I might be completely wrong and misguided.

Higher athlete participation (bigger athlete pool) probably have it’s role. With the TV and internet and globalization in general more and more kids might get familiar with different sports and might try them. Or might not – they might spend time at home and play Playstations and surf the Web instead. Believe or not in the TID (Talent Identification), having bigger athlete pool to select from is always a positive thing. Some qualities can be spotted early on with kids, but most of them cannot – hence I believe mostly in “natural selection” and allowing a lot of kids to try a lot of different sports and activities, and avoiding false positives and more dangerous false negatives in TID. We also forget about mental qualities someone needs to have (not necessary shown at an early age which is very problematic) to succeed and the importance of context (talent pools – environments) and chances.

TID reminds me of the story from Thinking Fast and Slow, where the author Daniel Kahneman, during the early years of the Israel, was selected as a psychologist in the Army to observe and evaluate candidates for officer training. One test “leaderless group challenge” was conducted on the obstacle field. The candidates needed to solve some practical physical task by uniting and leading each other – so the young Kahneman believed that certain candidates were much more suited for officers training if they showed better leadership, grit, hard work ethics and have been selected by other candidates. Funny enough, when Kahneman followed those successful candidates over their officer training, the success rate had almost ZERO correlation with the prediction of “leader less group” (see chapter 20: The Illusions of Validity). Here are his words “… when my colleagues and I in the army learned that our leadership assessment tests had low validity, we accepted that fact intellectually, but it had no impact on either our feelings or our subsequent actions”. Hence, even by knowing that the tests have zero validity, they still believed that certain individual will succeed. It is like optical illusion that tricks us every time. With now years of TID, I am looking forward to see if these programs yield any benefit to the old “get a lot of kids to play and experience sports and let the natural selection does it’s own thing”.

Higher chances of stumbling on the talented individual I believe that this might be pretty influential factor. I am pasting a passage from Bob Takano’s book Weightlifting programming: 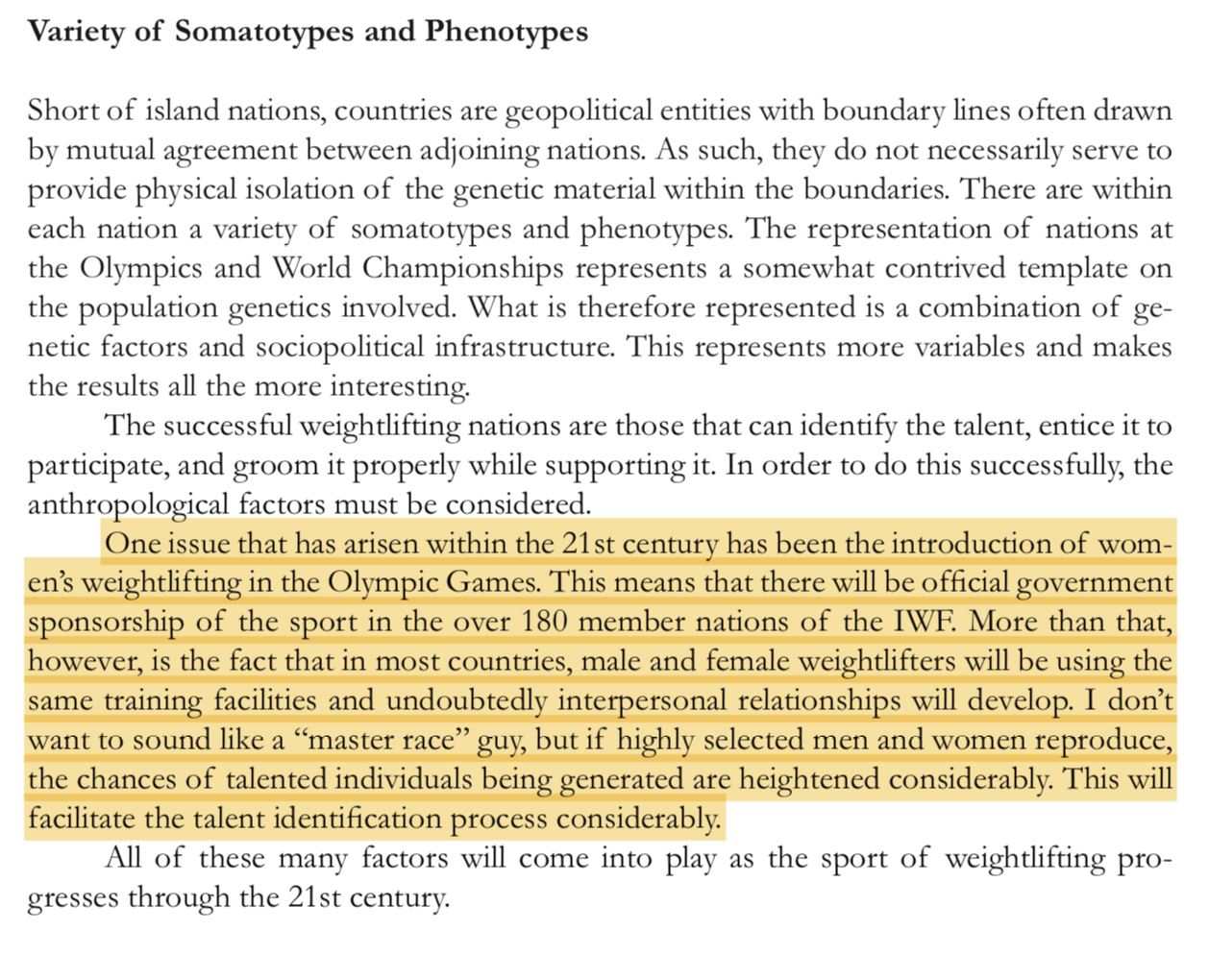 When Ashton Eaton got asked why do athletes in track and field getting better and better, he answered “We keep marrying each other”. Funny as may sound, there might be something here.

As said by Bob Takano, these high level athletes started sharing training facilities and maybe later “bed sheets”, which might bring a high level individual that that have high chance of acquiring “sport genes”, plus growing up in sport family and being influenced by sporting environment. This won’t cause any major ‘evolution through mutation”, but this talented young individual will be inheriting good genes, being around sporting role models and hence getting higher chance of being selected and worked with, since there is a high chance they might be sticking around sports and facilities of their parents. Thus, higher chance of stumbling onto talented individual. We are already familiar with numerous sporting families.

Without sounding contradictory to my statements about TID above, these kids might not show “potential” in the early age, but might develop to the full blown champ later on. Again, depends what we use to screen. There is no free lunch (hunch).

Since Qatar is investing a lot in sports and developing sporting culture, I wonder how much “segregation” between boys and girls in schools and training facilities will limit such efforts. Without girls “watching” boys, and vice versa, and without two talented individuals “hooking” up, I am not sure how much the efforts to raise up the sporting culture will be limited in the long run.

Let me know what you think about these issues on the forum…..