Working as a Team S&C Coach

Working as a Team S&C Coach

Do you work as a team S&C coach, and you are all alone? You must do everything in a gym for yourself, and then the team management asks you to test athletes. Then comes analysis, making plans… well, you know how it goes.

How often do you get frustrated? I know the answer for myself.

Is it possible to be more “cost-effective” in this?

To be honest, I don’t have a straight answer. Beg the team management to get you an assistant or try to find a way that works well enough to be good enough for both sides to get the results you want and to spare your energy and time.

During my twenty years in the business, I found a couple of “shortcuts” to managing a team of so, so motivated athletes.

Let’s first define the athletes that use strength training for their sports as something that helps them get better and to resist injuries as “generalists.” The other group is “specialists” who train and compete in strength-related sports, they lift, move, or throw heavy objects. This differentiation comes from Mladen’s book. I might add another group of semi-specialists who take strength training very seriously, just like specialists, but compete in other disciplines, like sprinters.

Generalists are all team athletes and others, and this article is about them.

Often generalists avoid strength training or anything that resembles this widely. They don’t like to test for max strength and often find excuses not to test, or if they do test, they don’t push near the maximum. With this in my mind, why even bother testing them? As an S&C coach, I rarely believe the testing result.

Even if the athletes perform the test, daily fluctuation of daily preparedness is very inconsistent and can fluctuate for +/- 18% on average referenced in Mladen and Flanagan’s paper.

So how do approach this riddle to solve it very economically for both sides?

Back in the day, we have a cheat list that is strong enough for athletes in different sports. We said that footballers (here I mean true ballers that play their sport with legs, not that other sport named similarly and played with hands with occasional heads bangs.) should squat from1,25 to 1,5 x BW and on the bench press, they can lift their BW or a bit more, so 1 to 1,1 x BW. Don’t ask me for references, as I don’t have one, this is the coach’s case study at the best, and I can always blame it on Poliquin too.

Coaching a football team of 25 oddly trained players presents you with some fine issues of dealing with different minds. Some of them never lifted a heavier object, some did and didn’t give a damn about it, and some are very eager and knowledgeable about this.

Last year I planned according to percentages from testing. I did 3 RM test on Bench press and Squat (there were other tests too) and knew from my experiences that half of the team wouldn’t push to the limit. I then put those numbers from both tests into Mladen’s excellent Strength Card Builder and made a progressive plan for each individual player.

Players then took their daily training load from the worksheet, but we often had to adjust the load to suit their daily preparedness to lift. Those with higher numbers upward and those with really low numbers from testing mostly downward.

In two to three training sessions, we get to real and meaningful numbers. I then corrected their testing values with those “new” numbers.

That’s what happens a lot when you are dealing with generalists. We must consider that and fix this hole with duct tape to avoid leaking!

You might ask how I approached this after the test. If I answer this here, I might get arrested, let’s leave this thing for small talk between four eyes and a cold beer in a hand.

For this year’s preparatory period, I got some baseline (see Table 1 below) from last year’s testing, adjusted with corrections during the sessions. This year I started with very low load numbers and adjusted that, mostly upward. I had to adjust downward for only one player. With that in mind, we can see that this is an easier way of dealing with not 100% accurate loads. 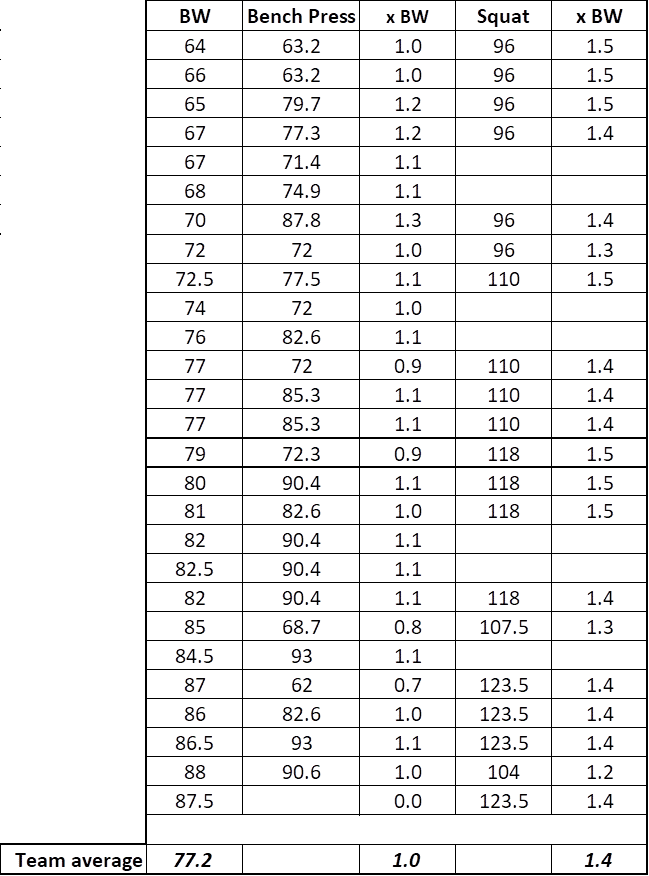 I will explain here how I approached planning and training sessions afterward. Here is a table of percentages regarding body weight for both exercises (see Table 2 below).

We weighed players, and I prepared a worksheet for bodyweight and daily training coefficient for the desired load.

My plan was very simple and straightforward. For the calculated exercise, I used the above load table. For other exercises that I didn’t test, we progressed from training to training, or I incorporated bodyweight exercises.

The next thing was preparing a sheet with exercises. Always focusing on one major thing and one on the secondary list.

Figure 1 – Plan for half of training session, the other half was work on acceleration, deceleration and change of direction

I wonder what happened with those that didn’t fit into this calculation. Well, simple, they had to adjust their load. If it was too much on the bar, they removed 5 – 10kg from the bar (remember from above: only one had to adjust downward) and proceeded with that load, and I corrected for them for the next training. If it wasn’t enough on the bar, well, then they had to add 2,5 – 5kg.

We used a spotter in every set for safety reasons.

Like last year when I used 1 RM percentages, this year, in my opinion, we had to adjust the load for less than half of the team, and we got closer to the right numbers in two or for a few, not so serious lifters in three sessions.

You might think that this approach is worth a circus. To tell you the truth. It is the same snake oil as percentage-based training, and I do believe it is not causing any harm to players, which for me is the major point to consider.

I am not trying to sell you this approach as the best approach, just give you another option to plan for generalists that don’t know much or even care less about lifting.

I am doing similarly in our SuperTrening gym when working with individuals when they come to us for a few sessions before they return to their teams.

“All models are wrong, but some are useful.”

Replace word models with methods, and we get the picture here.

I am a Strength and conditioning coach with more than 20 years of experience, trying not to be too serious. Coming from Slovenia. Started with the SuperTrening brand, now Co-owner of the SuperTrening gym in Celje with two other great coaches and fellow minds.

Coaching athletes from youth to Olympic level. I did sports in my youth and had my share of injuries that I had to rehabilitate, so I am now specializing in the rehabilitation of MSK injuries.